Different small business owners value different features in their merchant services products. For those that care deeply about accounting and bookkeeping, there is AccuPOS. An amalgamation of “accurate” and “point of sale,” AccuPOS brands themselves as the first POS system designed specifically to integrate with your accounting software (AccuPOS debuted in 1997). Using AccuPOS guarantees that every transaction your staff runs will become a corresponding line item in the accounting program of your choice.

Of course, this is far from the only thing AccuPOS does. They’re also a full-fledged POS system that runs on a variety of different devices and is compatible with a range of business types. To understand exactly what AccuPOS can do for your business, let’s evaluate this system’s capabilities and price to determine what kind of value it brings to the table. In this AccuPOS review we’ll also evaluate the pros and cons of the system, as well as recommend some top alternatives. 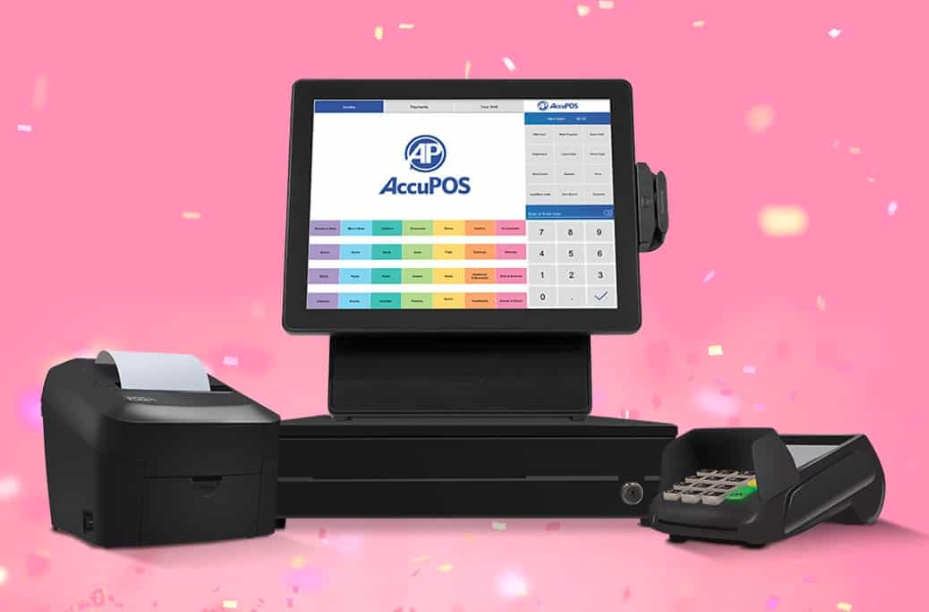 AccuPOS is a purveyor of POS software and hardware for small business owners. The software functions on Android devices and computers running Windows 7 Pro or higher. AccuPOS does not currently function on Apple hardware. The software can be both cloud- and web-based, meaning you can store your data on your POS device, or have it transferred to your device from an AccuPOS server via the cloud.

In terms of use cases, AccuPOS designs software that can be used for both retail businesses and food-service businesses—including restaurants, bars, and counter service establishments. So that’s the lowdown on what AccuPOS is. Now let’s get into what you get when you purchase a subscription to this POS hardware.

The flagship feature of the AccuPOS system is its accounting integration, but that is far from the only thing it can do. Here is a rundown of all the capabilities of this POS system.

AccuPOS does not offer in-house payment processing. They also don’t provide much information on their website about compatible payment processors. According to user reviews, Mercury Payment Systems is the AccuPOS processing partner, meaning you will have to work with them to acquire a merchant account for your AccuPOS system.

Mercury Payment Systems does not provide specific pricing information about their services. However, Mercury is a subsidiary of Worldpay—one of the largest domestic merchant services providers. Worldpay charges a rate of 2.9% + $0.30 for both in-store and online transactions. High-volume merchants may qualify for a reduced rate of 2.7% + $0.30.

As we said earlier, AccuPOS is compatible with Android devices and computers running a Windows operating system. There are three different hardware bundles you can purchase through AccuPOS, all of which are bundled with the AccuPOS POS software. Pricing on these hardware bundles is quote-based.

The first option is the Complete Retail Software + Hardware Bundle. This package comes with a branded touch screen POS terminal, cash drawer, and receipt printer. The POS terminal also comes with an attached credit card reader that can accept magstripe and EMV payments.

The other two options are mobile POS systems designed to run on either a Microsoft Surface Pro or a Samsung Galaxy Tab. These options cater more to food-service businesses that want to offer tableside service. The Microsoft Surface Pro comes with an integrated receipt printer and pin pad card reader that can accept magstripe, EMV, and NFC payments. The Samsung Galaxy Tab also comes with a pin pad card reader as well as a mobile magstripe reader that plugs into your POS terminal.

AccuPOS is also compatible with most hardware peripherals (barcode scanners, receipt printers, cash drawers) if you already have your own. However, you should confirm with AccuPOS before purchasing any third-party hardware

Here are the accounting platforms AccuPOS is compatible with:

The key benefit here is that your POS streamlines you accounting process and eliminates redundancies, since the information is automatically transferred from AccuPOS. Inventory is maintained in the same place you process purchase orders and write vendor checks. Overall, AccuPOS can apply the inventory management, customer relationship management, and reporting features included in your accounting software to your POS.

While the accounting integration is at the heart of the AccuPOS product, there are a variety of other functions this software is able to perform. Here are some feature highlights:

AccuPOS offers 24/7 phone support. There is also a page on their website where you can submit a ticket if you are encountering a technical issue. Additionally, they offer a help center and a blog with useful tips on how to get the most out of your POS system.

AccuPOS does not provide pricing information on their website, so you’ll need to contact them for a quote. According to the customer review website Capterra, pricing for POS hardware and software bundles starts at $795. There is also a $64 monthly charge for unlimited customer support.[1]

Given everything we’ve gone over, here are what we see as the benefits of going with AccuPOS as the POS system for your small business.

If you’re someone who likes to keep close track of your finances, AccuPOS offers a lot in the way of accounting features. After all, accounting is what AccuPOS has built their brand on. While other POS systems also integrate with accounting software, their integrations only really make it possible to export sales data. AccuPOS’ integration essentially adds all of your accounting software’s features to your POS. That is a unique and powerful capability.

According to user reviews, AccuPOS is certainly one of the easier POS systems to learn how to use. The interface is minimalist and intuitive, and color-coded buttons make it easy to spot the appropriate functions. Furthermore, AccuPOS offers a series of webinars to new merchants to train them on how to use the AccuPOS system. `

Despite the positives, there are also some areas of concern with AccuPOS. Here are some cons:

While AccuPOS’ accounting integration is really good, it comes up a bit short in terms of other features. For instance, we’d like to see a bit more functionality with their restaurant tools. There also aren’t any integrations to speak of outside of accounting, and no employee-management functions outside of timekeeping. Therefore, mid-size to large businesses might find this software a bit lacking.

Generally we feel a POS provider should offer you options when it comes to payment processing. This way you can shop around for the best rate. The fact that AccuPOS only integrates with Mercury Payment Systems leaves small business owners with little leverage when negotiating their payment processing rate. While we don’t know exactly what rate they generally charge, Worldpay (of which Mercury is a subsidiary) also isn’t known for their affordable payment processing. Tread carefully here.

Here is how customers who use AccuPOS rate the system on major review websites:

In positive reviews, users laud AccuPOS’ customer support staff and the software’s ease of use. Most negative reviews focus on glitches and bugs within the system that make it operate in unintended ways. For example, one user reported having issues running payments when they updated their sales tax information. Another says they had a very hard time importing their inventory catalogue from QuickBooks to AccuPOS. 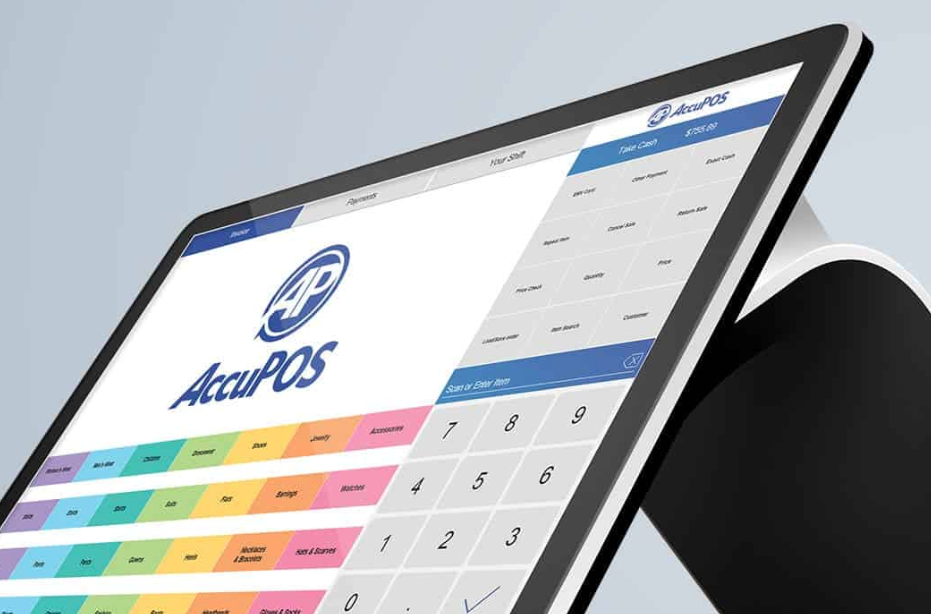 While AccuPOS may be the right choice for some businesses, it won’t be perfect for everyone. If you want a POS system with a slightly different feature set, here some top alternatives to AccuPOS to consider.

The retail version of Square’s POS software comes with a nice feature set that has a pricing plan with three options starting at $0 per month. You’ll get in-house payment processing; inventory, employee, and customer relationship management functions; a reporting suite; a wide range of integrations; and access to Square’s very popular POS hardware. Payment processing costs are 2.6% + $0.10 per transaction, and Square sells add-ons for a loyalty program, payroll platform, and marketing platform.

For those in need of a restaurant POS system, we recommend TouchBistro. The main benefit with TouchBistro is that you can bundle your POS hardware and software costs together into a monthly fee. Prices start at $105 per month. For your money you’ll get all the tools you need to run your restaurant: order coursing; menu, floor plan, inventory, employee, and customer relationship management; delivery and takeout functionality; and add-on hardware, including a kitchen display system, self-ordering kiosk, and a customer facing display. TouchBistro also works with a variety of third-party payment processors, allowing you to shop around for a solution that works best for you.

Is AccuPOS Right for Your Business?

Deciding whether to use AccuPOS depends on what you prioritize. If you are obsessed with bookkeeping and love your accounting software (and your accounting software is either QuickBooks or Sage), AccuPOS could make a lot of sense for your business. However, not every business owner feels this way. If these features don’t appeal to you, we recommend exploring the market a bit more for something that functions a bit more like a POS and less like a crossover between two different softwares.