Should Your Business Use Blind Hiring?

Blind hiring is any step hiring managers take to hide information about a job candidate so that the information doesn’t bias a hiring decision.

Also called blind recruitment, the idea is that hiring managers should focus only on the information on a candidate’s resume that is relevant to a given job (prior work experience).

Other information, like a candidate’s name, college, address, hobbies, and volunteer work, can reveal information about the candidate’s gender, race, income level, age, and religion and therefore bias the hiring decision.

By evaluating candidates on their relevant work experience alone, blind hiring aims to reduce bias and potential discrimination in the hiring process and boost diversity and inclusion in the workplace. Skip to our infographic for a closer look at how this works in practice.

Large companies typically have robust diversity and inclusion initiatives, but it can be difficult for small- and medium-sized companies to prioritize diversity. However, there are plenty of reasons why every company, regardless of size, should aim to diversify their workforce:

Let’s explore the origins of blind hiring, its pros and cons, and how your business could realistically use blind hiring, regardless of if you’re hiring your first employee or your hundredth.

When Did Blind Hiring Start? 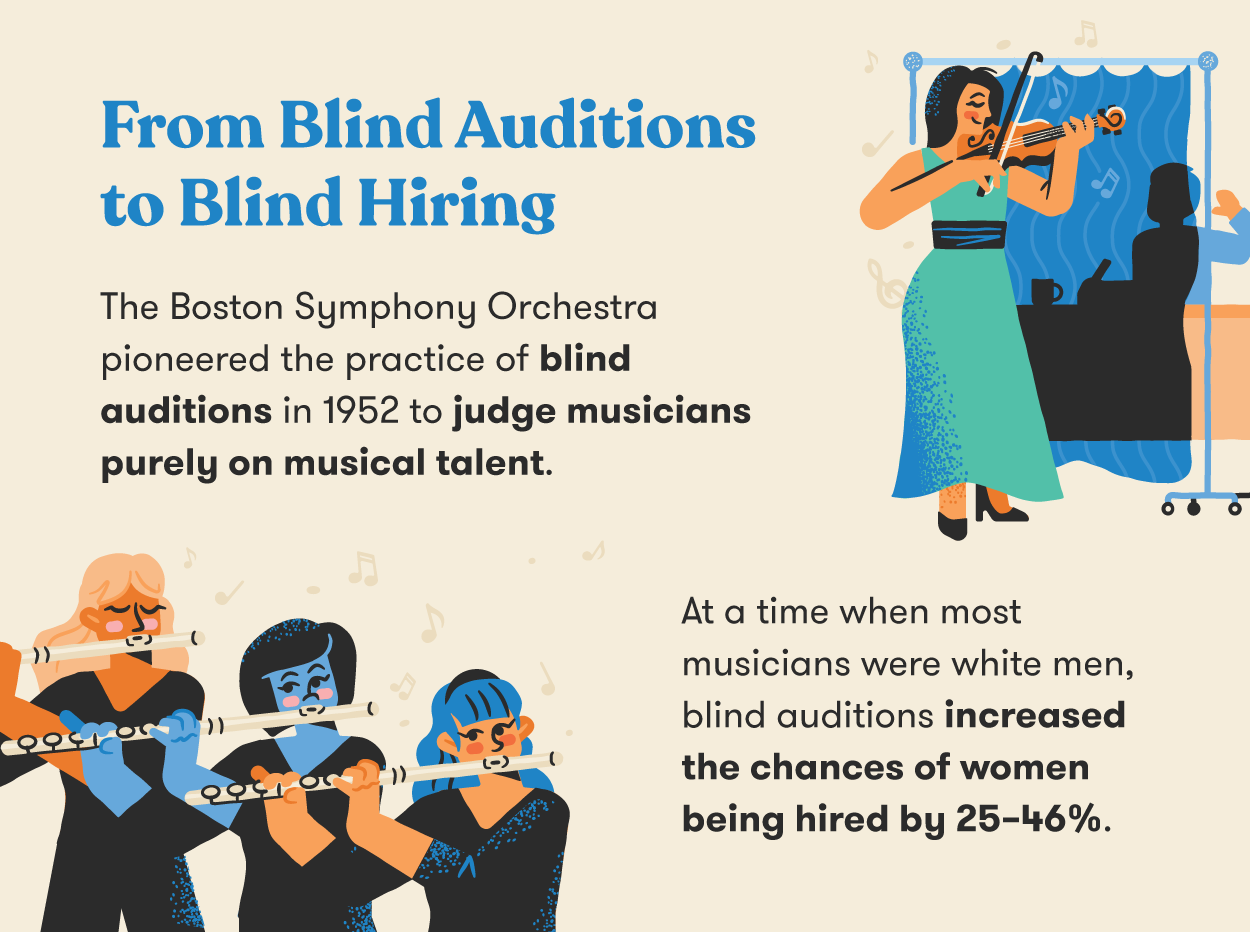 Blind hiring has been around for some time. It started in the music world when the Boston Symphony Orchestra experimented with blind auditions in 1952. Musicians would audition for the orchestra by playing behind large screens so that judges couldn’t see them. Additionally, they would walk on carpeted floors so that judges couldn’t determine what types of shoes they were wearing and whether they were men or women.

Other orchestras took up the practice in the 1970s after two black musicians sued the New York Philharmonic for racial discrimination in 1969. Orchestras during this time were made up mostly of white men.

Researchers at Harvard and Princeton later studied blind auditions and found that the process increased women’s chances of being hired by orchestras by up to 46%.

The same concept of judging candidates on their merits was later transferred to the workplace. Let’s take a closer look at how blind hiring works.

Why Is Blind Hiring Necessary?

Studies show that humans are flawed when it comes to judging job candidates. Despite their best intentions, hiring managers often let bias creep into the process. Here are just a handful of examples that show just how biased hiring managers can be.

This bias against mothers, sometimes called the motherhood penalty, also affects women who have already been hired. The study found that mothers are perceived to be about 12 percentage points less committed to their jobs than their non-mother peers. (By comparison, fathers are perceived to be five percentage points more committed to their jobs than their non-father peers.)

Bristol University studied the effects of religion on candidates’ job prospects in the United Kingdom.[3] The study found that Muslim men are 76% less likely to be offered a job than Christian men. Meanwhile, Muslim women are 65% less likely to be hired than their Christian counterparts.

Blind hiring most often involves removing candidates’ names, addresses, education info, volunteer experience, and hobbies from their resumes—or asking candidates not to include this info in the first place.

Each of these pieces of information can reveal traits of a candidate that can bias a hiring decision: race, gender, age, income level, religion, political preference, sexual orientation, or even whether you’re a parent. 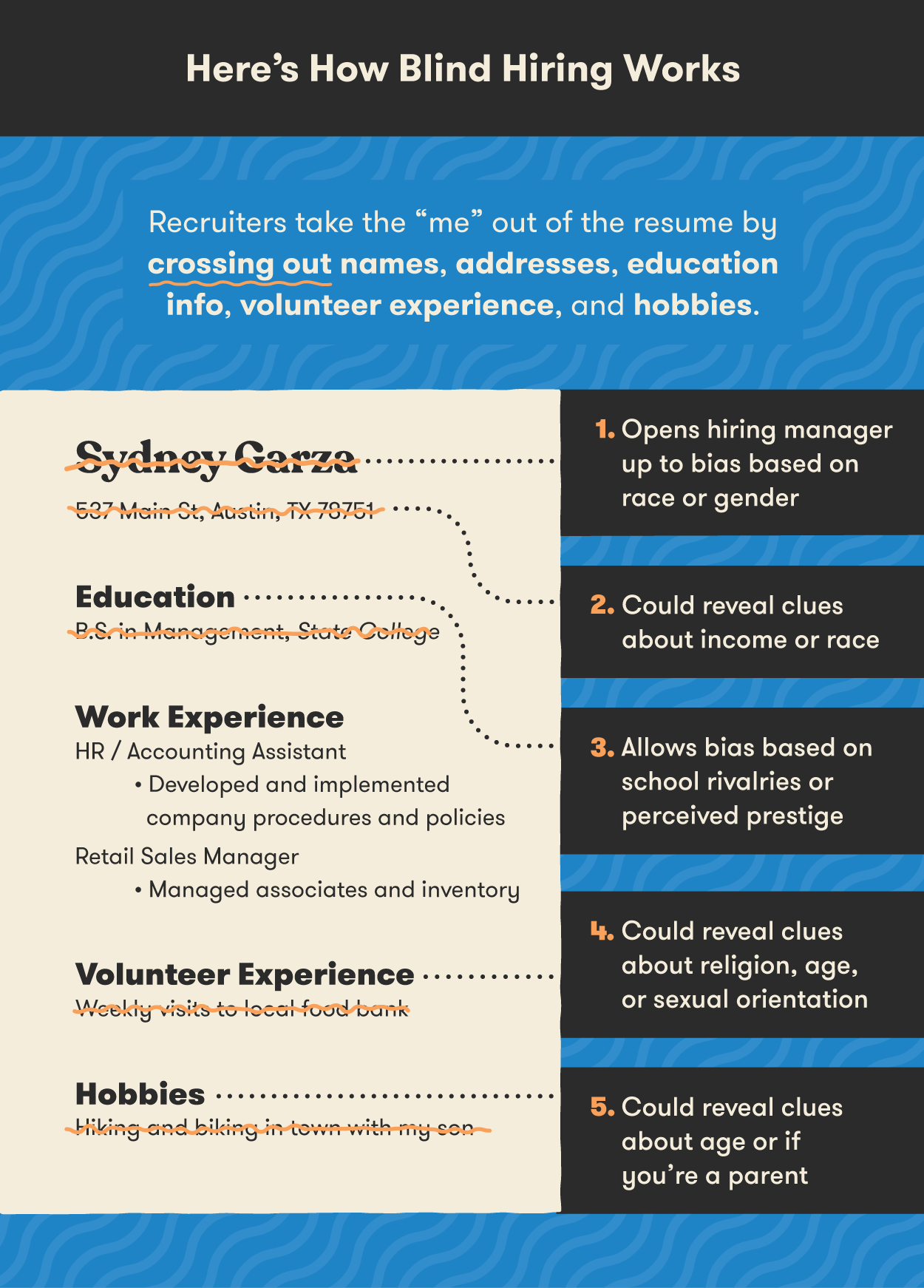 The short answer is that blind hiring could be effective in certain circumstances.

Social scientists have conducted field experiments in France, Germany, the Netherlands, Sweden, Canada, and Australia. The results have been mixed: blind hiring seems to effectively root out discrimination when it comes to calling in candidates for interviews.[4] In other words, candidates from majority and minority groups tend to be called in for interviews at the same rates under blind hiring.

However, the effects of blind hiring become murky when looking at job offer rates. In some cases in the experiments, minority candidates were offered jobs at higher rates. In other cases, bias seemed to creep in at the job offer stage.

It’s important to note that, while the initial screening might be blind, hiring managers often need to meet with candidates face-to-face or on the phone before hiring them. Discrimination and bias may present themselves in these later stages of the hiring process, even if they’re rooted out in the initial stages.

On the other hand, blind hiring has its drawbacks. If implemented inefficiently, these techniques can be expensive, time-intensive, and prone to error. Shielding certain information from hiring managers may also interfere with company initiatives to promote diversity.

Still, the experiments found that blind hiring can signal an employer’s strong commitment to diversity, which can positively impact employee and public perception of the company. 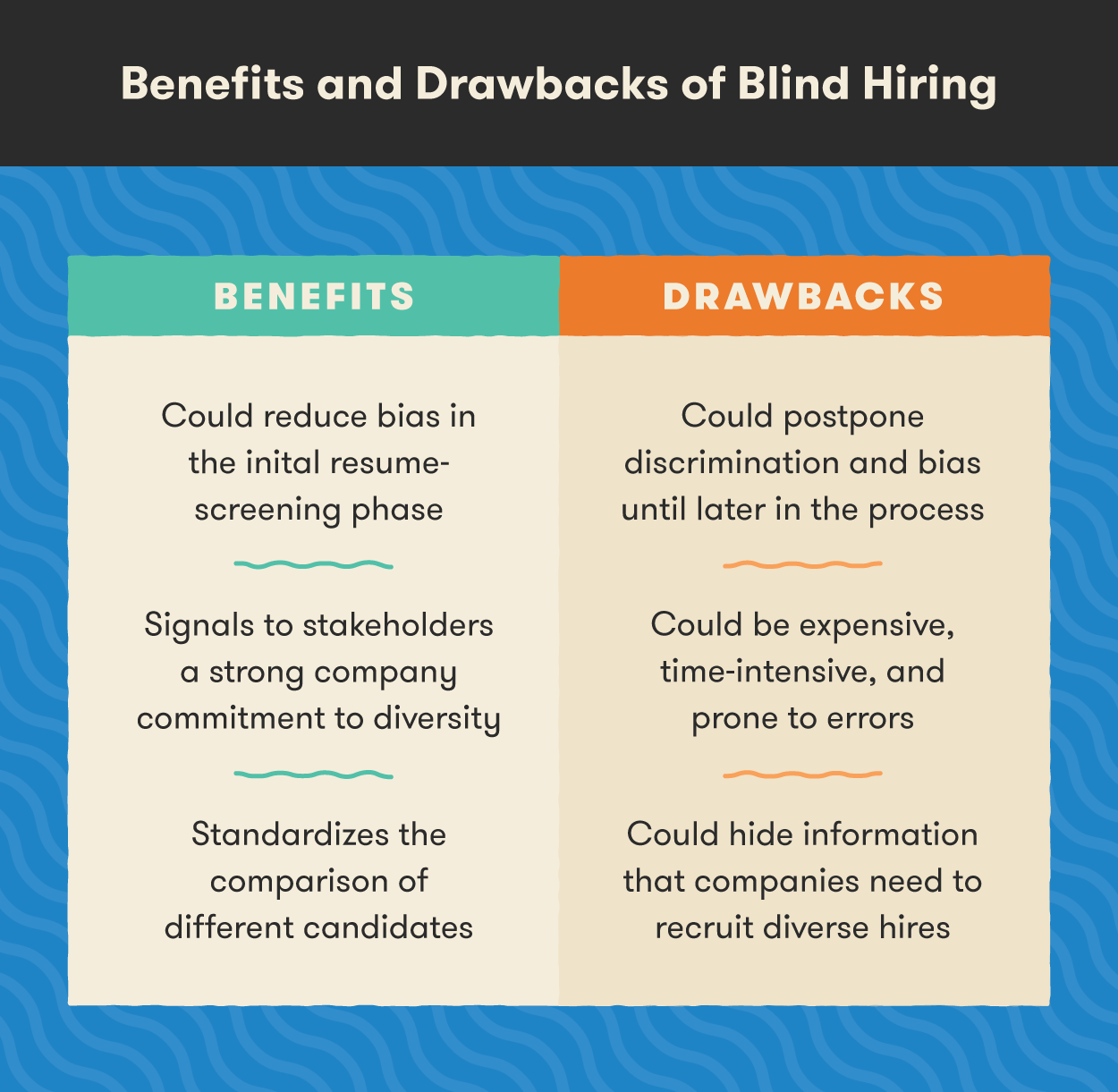 How to Incorporate Blind Hiring Into Your Business

If you’re ready to give it a try, there are a number of ways to incorporate blind hiring into your business, no matter how big of a budget you have.

If you’re a large business with plenty of resources, there are a number of HR tech companies that can help you reduce bias in the hiring process. GapJumpers is one such company that gives job candidates a test, grades the results, and sends the results to your business without any identifying information. You can then call in whoever you want to interview based solely on the performance results.

If you’re a smaller business that doesn’t want to buy a service, you can implement blind hiring practices yourself. There are two main methods that you can use:

A German study found that it could be expensive, time-intensive, and prone to error to manually black out information on resumes.[4] However, using a standardized application form in which candidates list their experience and obscure other information seems to be more efficient.

This method shifts the burden to obscure information onto the candidate, instead of your company, without having an effect on candidates’ willingness to apply.

You can also create a DIY test assignment, grade the assignment without looking at names or personal information, and call in candidates to interview based solely on the test scores.

Check out our infographic for a complete overview of the blind hiring process.

Randa Kriss is a senior staff writer at Fundera.