In Defense of Failure: How Losing Big Can Help You Win in the Long Run

Contributor at Fundera
Aja McClanahan is a financial writer who blogs regularly at www.principlesofincrease.com and also writes for other online publications covering personal finance, entrepreneurship, travel and general lifestyle topics.

Aja McClanahan
Editorial Note: Fundera exists to help you make better business decisions. That’s why we make sure our editorial integrity isn’t influenced by our own business. The opinions, analyses, reviews, or recommendations in this article are those of our editorial team alone.

You’ve heard the many famous stories of failure about people like Abraham Lincoln, Michael Jordan, and Thomas Edison. You’ve heard the dramatic, romanticized tales of how Lincoln lost major elections, Jordan not making his high school team, or how Thomas Edison failed over 1,000 times finding the perfect filament for the commercial light bulb.

Failure can be uncomfortable, but what if it doesn’t have to be final? Henry Ford once said, “Failure is simply the opportunity to start again more intelligently.” Ford’s quote reiterates what we know about failure in the business world: Falling short of a desired outcome can often catapult you into success in the long run.

What Exactly Is Business Failure?

Business failure can come in many forms. It’s not always closure, asset liquidation, or bankruptcy. For this reason, business failure can be a nebulous status ascribed to an unexpected business outcome. So, how do we decide if someone or some entity actually failed? 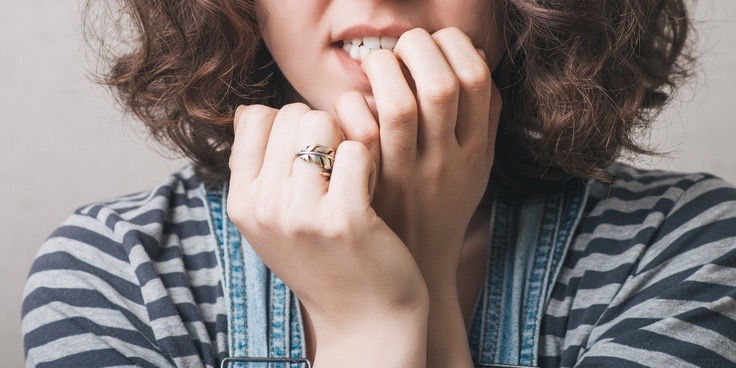 Think of a large, multibillion dollar corporation that misses revenue targets. Technically, they’ve failed, though they’ll likely go on to other things and remain in business. On the other hand, a small business can close up shop, sell off assets, or move to another location under new management—all of which could be considered a form of failure.

If the definition of failure is not clear, then the statistics can be misleading if not placed in the proper context. In a nutshell, business failure can be a spectrum of events that might or might not be a clear correlation to the risks of a starting business.

What Do the Numbers Say About Business Failure?

The oft-cited “9 out of 10 businesses fail in the first year” statistic has yet to be proven but continues to discourage a number of would-be entrepreneurs and business owners. That particular stat remains unverified until this day.

As we can see, failure comes in many flavors and varieties, but for the most part, the numbers tend to show that there’s no reason to believe that 9 out of 10 businesses will fail.

A table from the U.S. BLS demonstrates this idea: 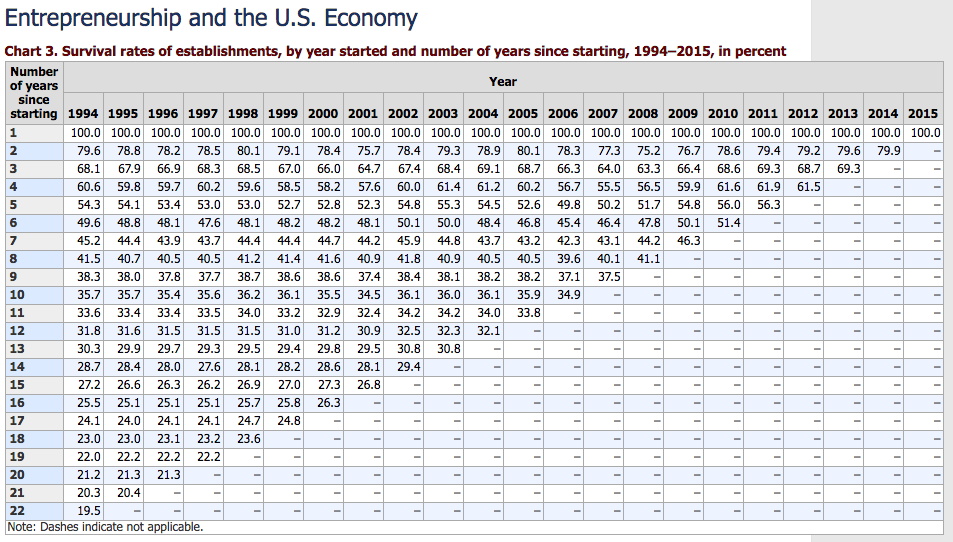 Why Do Businesses Fail?

Businesses fail for many reasons. Here are a few reasons summed up by an infographic composed by InsuranceQuotes.com:

Management and money are key ingredients to a business’s viability. Without sufficient access to cash, business failure becomes inevitable. Other problems can include those around personnel, lack of expertise, or marketing savvy, but these issues invariably end up affecting revenues and operating capital negatively.

Why Would You Want Your Business to Fail?

No one really wants to fail, but failure, like its old pal experience, can be a great teacher for some entrepreneurs. Failure can be a painful aspect of the learning process, but the intelligence that comes from it is invaluable.

Even Mark Zuckerberg famously said, “Move fast and break things. Unless you are breaking stuff, you are not moving fast enough.” In this sense, failure can actually support innovation and business breakthroughs.

How Can You Avoid Business Failure?

The bad news is that you can’t always avoid business failure. The good news is that you can get more adept at uncovering business risks and then create a plan to reduce or mitigate them. Co-author of the book Billion Dollar Lessons: What You Can Learn from the Most Inexcusable Business Failures of the Last 25 Years, Paul Carroll offers up a number of case studies on business failure.

This book reveals reasons why large, multimillion- and multibillion-dollar projects like acquisitions, product line development, and even research initiatives in top U.S. companies were not successful. At the end of the day, he and co-author, Chunka Mui, found the need for an extensive pre-action, devil’s advocate review, to explore the downfalls, risks, and assumptions of a business move in question. 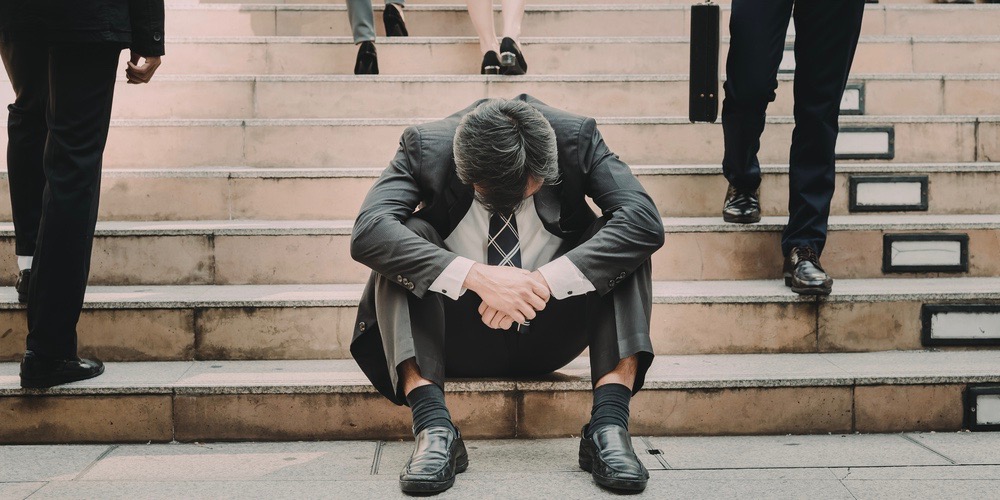 Though critical and thorough assessment of risk can’t totally insure against failure, it’s a great place to start. It’s a skill that can be practiced every day as small businesses face basic decisions such as changing vendors, updating a menu, or opening an additional location.

Obviously you can’t predict every major business fail, but the more time you take analyze your business decisions on the front end, the better.

Can You Analyze Business Failure?

Some sectors of both private industry and defense have rigorous protocols around dissecting the outcome of a project. This happens for both successful and failed attempts on business projects or military undertakings but can be more scrupulous when doing postmortems on failed projects.

This process, called after-action review (AAR) is designed to break down every aspect of a project or endeavor to find out what worked, what didn’t and how things can be improved going forward. Failure can become extremely valuable with this type of intense analysis of  failed actions and assumptions.

In all, AAR is used to make leaders and project managers better at execution. With limited failure in the picture, there can be limited knowledge of the intricate reasons some plans and strategies just don’t work.

How Can You Make the Most of Your Business Failure?

The beautiful thing about failure is the tendency to give way to new fresh beginnings. Learning from failure is not an automatic process and must be undertaken with intention.

Business failure can go two ways. It can be the reason someone quits and perhaps goes onto another endeavor or it can be the reason that someone preservers unto success. There is, however, a method to the madness. In order for a negative business outcome to seed positive ones, there has to be a shift in thinking. Otherwise, no learning or improvement occurs.

John C. Maxwell, leadership expert and author, explains how to “fail forward” in his book Failing Forward via having a different perspective on failure. In this table, he offers up the difference between devastating failure and failure that ultimately produces growth: 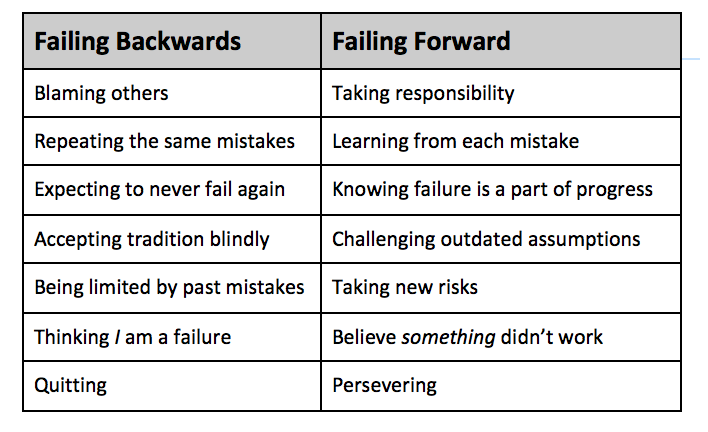 Has Anyone Ever Bounced Back from Failure?

Of course they have. There are hundreds of stories of world-famous and regular old people who experienced some level of rejection or failure before reaching success in their lives. In fact, one Stanford study suggests that those who’ve failed the most in business tend to come back stronger, wiser, and more successful with each additional attempt at business.

I’ll leave you with an inspiring story from the founder of Goal Setter, a gifting platform that helps kids save toward personal or charitable goals, Tanya Van Court. This high-powered, Stanford-educated executive knew it all and had it all working for a premier start up in the late ’90s. She had amassed stock options worth over $1.5 million.

Amid the stock market crash in 2001, she lost it all—every last penny of her wealth was gone. Van Court was devastated but vowed to learn all she could about personal finance. It wasn’t long before she was faced with the perfect opportunity.

Her 9-year-old daughter asked for money to invest in the stock market, and the idea for Goal Setter was born. Van Court was relieved at the thought of skipping out on cheap consumer goods as gifts in lieu of giving a gift to her daughter that would matter. She felt as though other moms would appreciate the idea, too.

She says, “My parents were elementary school teachers and taught me everything I knew. But they didn’t teach me about money.” Van Court created Goal Setter as a way to motivate kids to understand the power of saving and giving money.

Essentially Van Court’s big failure set the stage for her big win: “If I never lost millions of dollars, my company, Goal Setter, would not have been created.” This is a great illustration of how pain turned into passion create a meaningful venture that will likely help thousands of people reach their financial goals.

If you’re thinking of starting a business or debating about killing one, don’t be deterred by statistics reporting doom and gloom when it comes to business. Play the long game, and don’t be afraid to start, quit, or fail. You never know what great things your own astounding failure will create in the long run.

Contributor at Fundera
Aja McClanahan is a financial writer who blogs regularly at www.principlesofincrease.com and also writes for other online publications covering personal finance, entrepreneurship, travel and general lifestyle topics.