Nina Godlewski
Editorial Note: Fundera exists to help you make better business decisions. That’s why we make sure our editorial integrity isn’t influenced by our own business. The opinions, analyses, reviews, or recommendations in this article are those of our editorial team alone.

What Is Excise Tax?

An excise tax is an extra tax added on to certain products or services, including those a small business might offer. Usually the cost of the excise tax is included in the price of the good or service consumers buy, meaning the business owners include it in their prices. Excise taxes are usually charged on items like alcohol, tobacco, gambling, gas, and more, and are collected on a federal, state, and local level.

As a small business owner, you know you have to face a somewhat daunting tax season every year. It can be difficult to figure out the details of every small business tax you have to pay for your business and what exactly those taxes are for.

One of those specific taxes you might have to pay is an excise tax, a type of indirect tax that can be owed multiple times over the course of the year. While excise tax is not charged to all small businesses, or to all items a small business sells, it is a fairly common tax for the sale of some very specific items.

Excise tax only applies to certain goods or services, but if your business sells some or all of those products, you’ll need to know what excise tax is and how to pay it. Excise tax is paid when a purchase of a specific item is made. In other words, you collect the excise tax and then pay it to the government. Although you as the small business owner are responsible for paying the tax, many small business owners add that tax onto the total price of the item they’re selling, putting it on the consumer to pay.

An excise tax is a tax charged for items that are frequently seen either as socially harmful or as a luxury good or service. Luxury vehicles are subject to excise tax, as are alcohol, gas, airline tickets, indoor tanning, and more. Excise tax is sometimes also called a “sin tax” because it’s on goods that are considered unhealthy, and it produces billions of dollars in federal and state revenue each year.

Excise tax is thought to help decrease the use of potentially harmful products and services that are taxed at a higher rate than other non-harmful products or services might be. In fact, experts concluded that an increase in excise taxes and prices of tobacco products helped reduce overall tobacco consumption, according to a study by the International Agency for Research on Cancer.

Items that incur an excise tax include (but are not limited to):

Does Your Business Have to Pay Excise Tax?

Businesses selling certain items or services have to pay excise taxes. Depending on where you do business there are various state and local excise taxes to pay in addition to the nationwide federal excise taxes that will also apply.

Businesses that sell alcohol, tobacco, and/or firearms have to register with the Alcohol and Tobacco Tax and Trade Bureau (TTB), while businesses selling other items or services subject to excise tax will deal directly with the IRS. Some products that are subject to excise tax also need to be registered before you can begin selling them.

If you fail to register these products before you start selling them, you can face a penalty of $10,000 for each initial failure, plus $1,000 for each day thereafter, according to the IRS. That fine is in addition to any other tax that is owed at the time.

To register with the IRS you’ll need to fill out Form 637 and fax or mail a hard copy of it to the IRS. Once that application is approved you’ll get a registration letter. You can check your registration status online with the IRS. Below is an example of part of the Form 637. 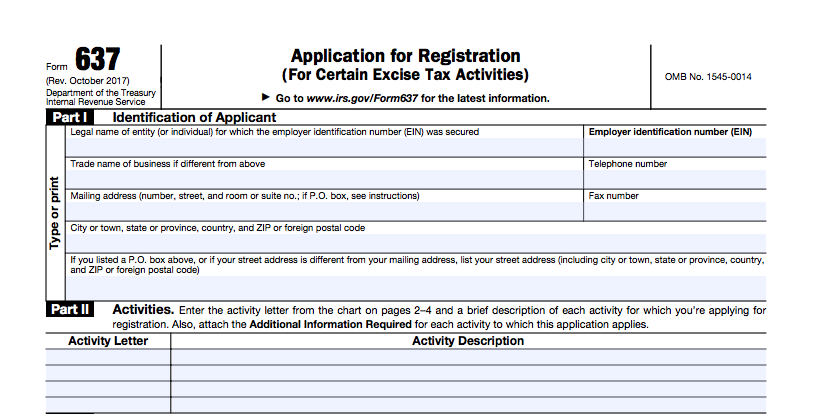 How Excise Taxes Are Calculated

There are two ways an excise tax is calculated. The tax is either ad valorem or specific. Ad valorem means the tax is a set percentage, meaning as a business you have to pay a set percentage of the sale you make. An example of this is the excise tax charged to indoor tanning providers. The excise tax on indoor tanning is 10% and, according to the IRS, should be collected at the time that the purchaser of the tanning service makes their purchase. So if the tanning business plans to charge $10 for a session, the tax would be $1. If they then pass that cost to the purchaser, the customer’s total would be $11.

How Is Excise Tax Different From Sales Tax?

Do You Have to Tell Customers They’re Being Charged an Excise Tax?

Some business owners choose to tell their customers about the excise taxes included in the price of the goods or services while others don’t disclose this information. When the tax on indoor tanning was implemented as part of the Affordable Care Act, some owners of indoor tanning businesses decided to tell customers about it as a way to explain the increase in prices at their businesses.

Many business owners don’t disclose the excise tax to their customers, though, and simply include it in the cost of items when pricing their goods or services. As a business owner, it will be up to you whether you disclose this information upfront with your customers.

What Are Excise Taxes Used For?

Money collected from excise taxes is either sent to a general fund or it’s set aside for specific trust funds. It makes up a small percentage, about 3%, of the federal revenue on a yearly basis. In general, the taxes are used to raise funds for public efforts and programs that benefit people in the U.S. They’re sometimes also used to promote positive behaviors or improvements, like road repairs and maintenance.

When Are Excise Taxes Paid?

Federal excise taxes are due on a quarterly basis and they’re due a month after the end of the quarter. To file you must fill out the Form 720 and either mail it to the IRS by the due date or file it online.

The IRS accepts both paper and electronic submission of the Form 720. Filing the form online comes at whatever cost the provider determines for the service fee. Be aware that not all excise tax forms can be filed electronically; there are still some that you might be responsible for that have to be physically mailed in. Those that can be filed electronically, according to the IRS, are: Form 2290, Heavy Highway Vehicle Use Tax; Form 720, Quarterly Federal Excise Tax; and Form 8849, Claim for Refund of Excise Taxes (Schedules 1, 2, 3, 5, 6, and 8).

The state and local excise taxes are on their own schedules. They’re due at a different time in each state and not always due when the federal excise tax is due, so be sure to check the details of the excise tax your business has to pay to make sure you’re on time. In some states, like Massachusetts for example, the excise tax on your vehicle would be due annually at a rate of $25 for every $1,000 your car is considered worth or is valued at.

The excise taxes owed to the Alcohol and Tobacco Tax and Trade Bureau are on a different schedule, as well. Some businesses file on an annual basis while others file quarterly or semi-monthly, depending on what good or service you sell. For example, firearms and ammunition require quarterly federal excise tax returns, as do indoor tanning services. The full list of excise tax due dates can be found online, and how frequently you file will have to do with the specifics of your business and your business type. The tax rates for the various types of alcohol, firearms, and ammunition are available from the TTB, as well.

Depending on your type of business, you may never have to worry about excise tax. But if you sell any of the products we’ve discussed, you’ll be responsible for paying excise tax. This will likely also impact how you price your goods—as most business owners pass this excise tax onto the customer.

In other words, this means another tax to keep track of and pay on time, but they generally don’t mean any less money in your pocket. You essentially function as the collector of the tax before passing it along to either the IRS or the TTB.

Excise taxes can be due more frequently than traditional annual taxes, so keep that in mind when preparing your business taxes each year. They can be as frequent as semi-monthly, so make sure you’re aware of every deadline. And if you plan on selling goods that require registration, be sure to get this done before making any sales—or you’ll face a steep fine.

While managing all of your taxes as a small business owner can be daunting, the IRS does offer an excise tax hotline that you can call with questions. And since state and local requirements vary, be sure you’re up to date on the state or states where your business operates.

Nina is a staff writer at Fundera where her goal is to help make complex business topics more accessible for small business owners. She was previously a staff writer at Newsweek covering technology, science, breaking news, and culture. She’s also worked as a reporter for Business Insider and The Boston Globe. Nina has a degree in communication studies from Northeastern University. Email: nina@fundera.com.

Latest posts by Nina Godlewski(see all)