Generational Differences in the Workplace: How Much Do They Matter?

Meredith Wood
Editorial Note: Fundera exists to help you make better business decisions. That’s why we make sure our editorial integrity isn’t influenced by our own business. The opinions, analyses, reviews, or recommendations in this article are those of our editorial team alone.

For the first time in history, five generations work alongside one another. That raises an interesting question. In work environments where members of the Silent Generation (born between 1928 and 1945) regularly brush shoulders with members of Generation Z (born between 1997 and 2012), there are bound to be significant generational differences—and even clashes—in the workplace, right?

There’s no doubt that Baby Boomers (born between 1946 and 1964), who lived through the Civil Rights movement, the first moon landing, and the war in Vietnam, have a different worldview than Millennials (born between 1981 and 1996) who were shaped by events like 9/11 and the arrival of the internet.

However, do those differently-lived experiences affect the ways in which different generations interact with one another and perform at work? Are generational differences in the workplace all that significant? Or do all generations typically value the same things?

As a small business owner, these are important questions. You should understand which generational differences are significant and which are perpetuated by stereotypes. That way, you can take measured steps to reduce generational bias in your workplace.

Keep reading for a look at what current research says about generational differences in the workplace, or skip to our infographic for a quick overview.

Generational Stereotypes at Work Are Common

It’s pretty easy to lump together all members of a particular generation. Just look at the popular “OK, Boomer” phrase often hurled at Baby Boomers by Millennials and members of Generation Z. Or many Baby Boomers’ characterizations of Millennials as lazy and narcissistic.

Analysis of decades of research reveals that certain stereotypes have stuck with each generation through the years.

Then, of course, there are the well-entrenched stereotypes related to job performance. The thinking often goes that Baby Boomers and members of the Silent Generation are “too old” to operate technology because they didn’t grow up in the age of computers and the internet. Or that Millennials and members of Generation Z are “too young” to lead teams.

Of course, there can be elements of truth to all stereotypes. However, as a small business owner and an arbiter of workplace culture decisions, it’s dangerous to characterize employees by what year they were born.

So How Much Do Generational Differences in the Workplace Actually Matter?

The short answer is not that much.

Let’s turn to the academic research. The authors of a comprehensive analysis of 20 studies on generational topics in the Journal of Business and Psychology found that there were not “systematic, substantive differences among generations in work-related outcomes.” 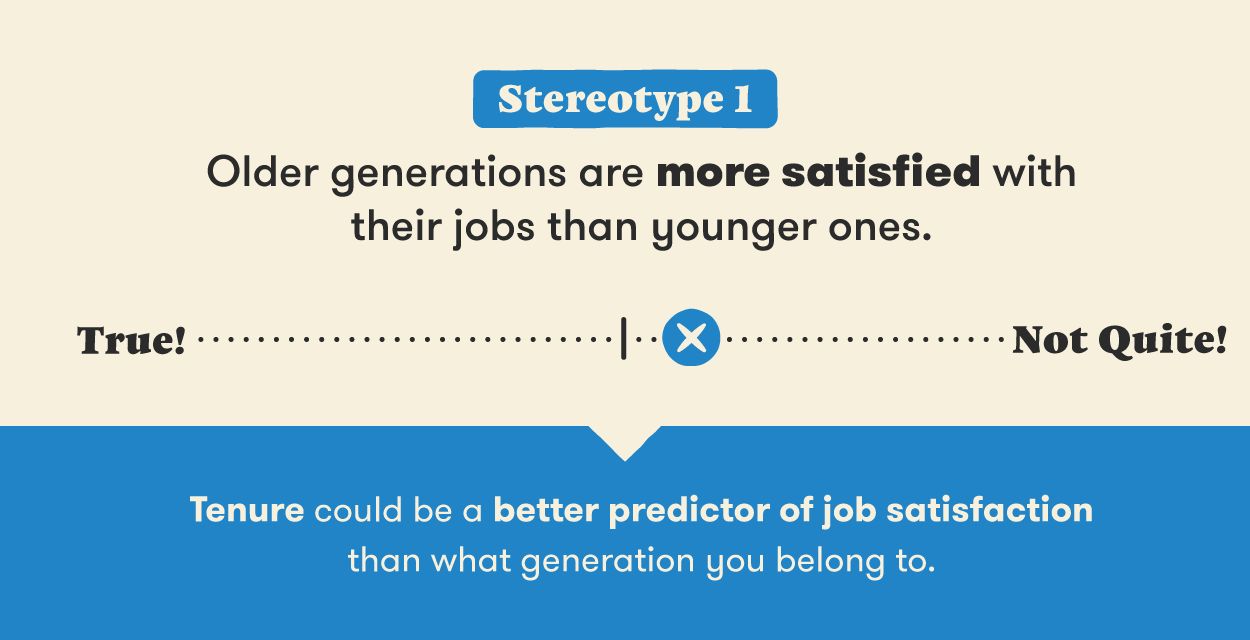 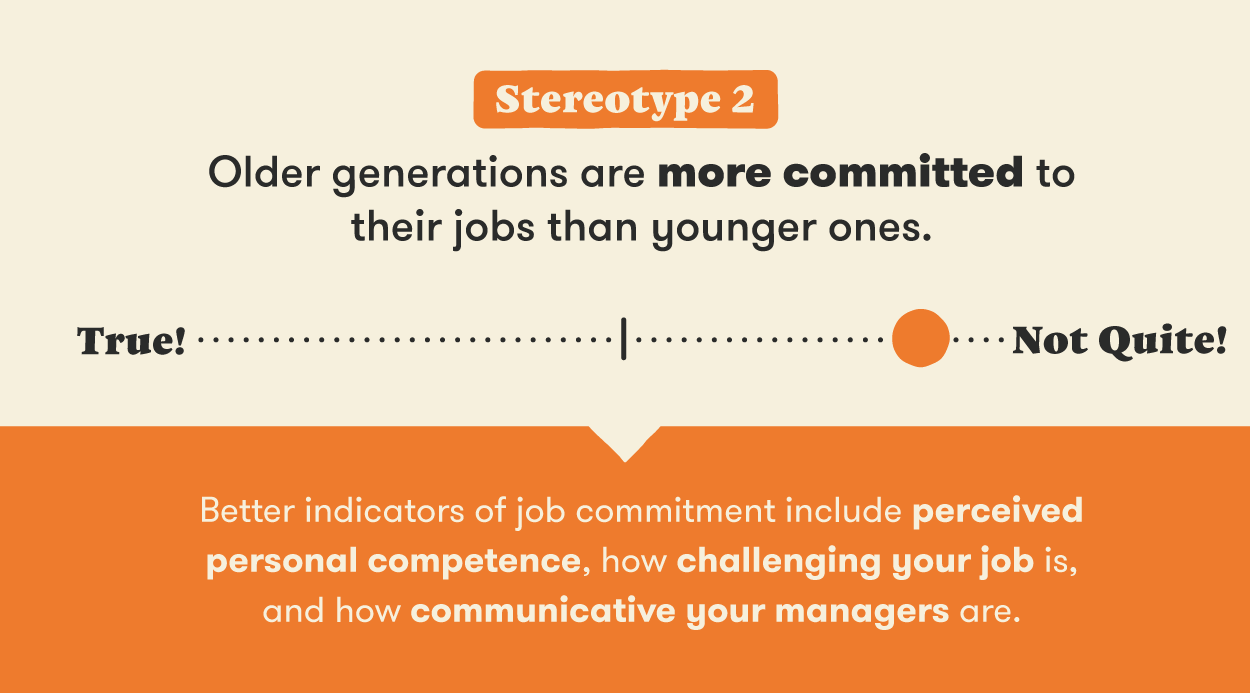 Instead, the study found that better indicators of job commitment include how competent you think you are, how challenging the job is, and how communicative managers are. 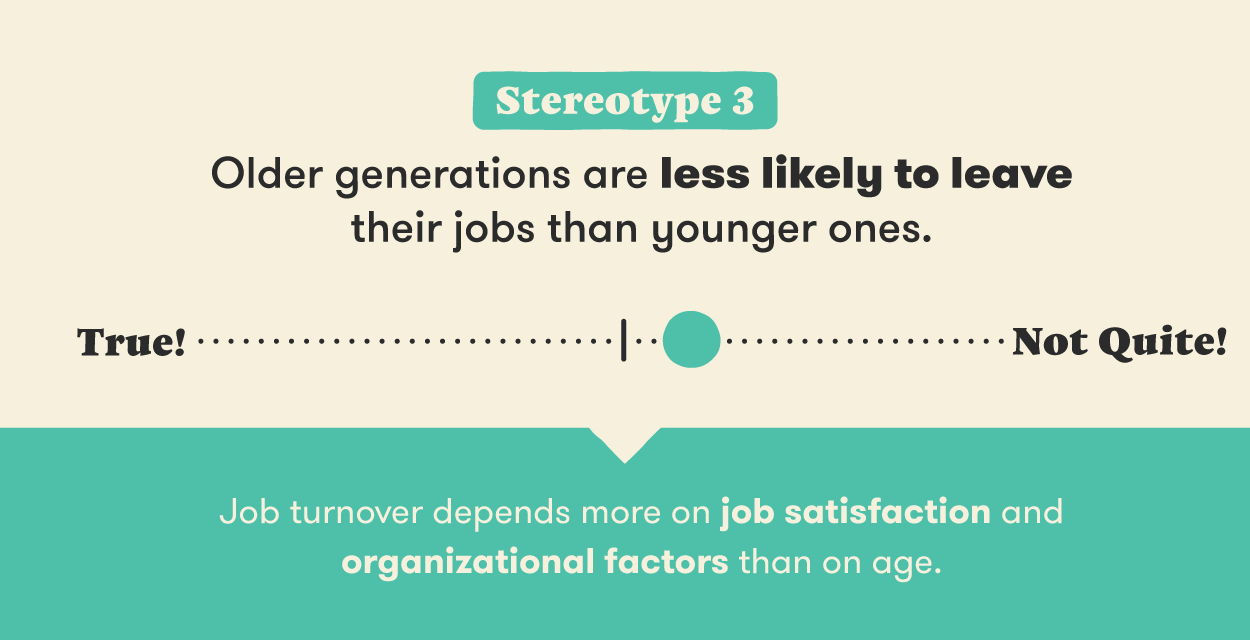 As with job satisfaction, the study’s results regarding job turnover were also mixed. Older generations were somewhat less likely to leave their jobs than younger generations, but again the authors inserted a cautionary note. Other factors, like job satisfaction and organizational commitment, tend to be better predictors of turnover than generation membership.

In her 2007 book Retiring the Generation Gap, Jennifer Deal, a senior research scientist at the Center for Creative Leadership, found that all generations share similar values, even if they express them in different ways. No matter the generation, workers value learning, respect, and honest feedback.

How Your Organization Should Respond to Generational Bias

If generational differences in the workplace aren’t as significant as many make them out to be, how should your organization foster an inclusive environment among employees of all ages?

The Society for Human Resource Management studied this issue and published a number of findings. If your company sponsors an apprenticeship program, you should ensure it’s open to workers of all ages. There shouldn’t be obvious language in position descriptions that favors one age group over another.

Additionally, you should consider launching a “returnship” program in which workers who have been out of the workforce for some time can re-enter with the help of training and mentoring. Often, workers who left the workforce for extended periods of time wish to return, but they find that companies won’t hire them because of their age or their perceived lack of skills. Your company should invest in workers of any age who want to learn.

Other companies have found success with cross-generational mentor programs and employee groups that specifically focus on talking about and dispelling generational stereotypes.

Check out our infographic for a comprehensive guide to generational differences at work and how your workplace can respond.

Meredith Wood is the founding editor of the Fundera Ledger and a vice president at Fundera. She launched the Fundera Ledger in 2014 and has specialized in financial advice for small business owners for almost a decade. Meredith is frequently sought out for her expertise in small business lending. She is a monthly columnist for AllBusiness, and her advice has appeared in the SBA, SCORE, Yahoo, Amex OPEN Forum, Fox Business, American Banker, Small Business Trends, MyCorporation, Small Biz Daily, StartupNation, and more. Email: meredith@fundera.com.

Latest posts by Meredith Wood(see all)