How did he come to start his own business? And how has he maintained such a loyal, local following over the years?

“Keeping it in the family,” Andy sat down with his niece Annie—one of Fundera’s own Senior Account Managers, and answered a few of her questions on how he’s kept his ice cream shop thriving in one of Pittsburgh’s local communities, Oakland, over the years. 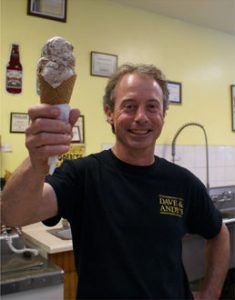 1. What made you want to start your own business, and how did you choose ice cream?

I graduated from a liberal arts college in 1983 with an economics degree, and I didn’t really know what I wanted to do after that. I did know that I didn’t want to sit behind a desk. So I spent some time traveling and ended up visiting my younger sister in Boston, where there were a lot of little, local ice cream shops. At the time, Pittsburgh really only had larger ice cream stores like Baskin Robbins—no shops with handmade ice cream. I liked the idea of owning a local shop and making ice cream that didn’t have a brand name, so I went back to Pittsburgh to make homemade ice cream.

2. So you started Dave and Andy’s in 1983, right after college. What was it like starting a business so young?

It was hectic—we went into it fairly blind and learned as we went along. We had made ice cream at home, but neither Dave nor I took a class or had any official lessons on making ice cream. We just knew we wanted to make homemade ice cream. We started out with a White Mountain freezer, which is a small batch ice cream maker. It makes about 5 gallons at a time, and takes 40 minutes to make one batch.

We gave our system a much-needed update about 6 years in, and bought a speedier ice cream machine. But when we were starting out, White Mountain gave us a lot of support and recipes, which was great.

3. Switching gears—Dave and Andy’s is a huge fan-favorite in Oakland. How did you gain such a following?

Well, when we were getting into the business, we didn’t know what we were doing. So we followed a model that worked. Steve’s Ice Cream, a famous Boston shop founded in 1973, was located right next to Tufts University, and that seemed to be working really well for them. Based off Steve’s success, we knew that starting an ice cream shop near a college campus would be best for us. We have the University of Pittsburgh and Carnegie Mellon University right nearby, so we get a big following from them. The nice thing about college towns is that by the time all the students’ cholesterols go up, they graduate, and another class comes in to take their place! Just kidding.

But really, being in the right location was huge for our success. The two colleges near us provide a really loyal and consistent customer base. We tried starting up other locations in different towns, but none of the shops were as visited as Dave and Andy’s. Plus, it’s great to have college kids come back to town and tell us how much they loved coming to the shop when they were in school.

4. Dave and Andy’s has been around for over 30 years. Other ice cream shops must have come and gone in the area in that time. How have you managed to stay successful for so long?

Well, on top of being located in a college town, we have a couple of other things going for us. We started Dave and Andy’s because we wanted to make homemade ice cream and run an original Pittsburgh small business. Even today, nobody’s as original Pittsburgh as we are, and our customers love that about us. Part of being so successful was setting ourselves apart from other ice cream shops in the area. We also change our flavors all the time and we offer some pretty funky ones too—so we’re hard to forget.

5. What’s your favorite thing about owning Dave and Andy’s?

When I started out, it was really important to me to have a business that served a local community. Our shop has a big following, but a lot of those people are locals—which is something I love about Dave and Andy’s. We have people who have been coming here for 33 years, and I really value having that customer base.

I get a lot of satisfaction out of serving great homemade ice cream to a community that I know well. Today, a woman made a special trip to the shop just to tell me how good the cake she bought from us was. I thought it was really sweet that she felt so strongly about our shop that she took the effort to come in and tell us how much she enjoyed our ice cream. So it’s the personal connection with our customers that makes owning a small business like Dave and Andy’s so rewarding.

As I mentioned, we make some pretty crazy flavors. Right now my favorite is our white chocolate cinnamon habanero. We grill habanero peppers, puree them into white chocolate, and then swirl that into cinnamon ice cream. At first taste, all you get is the cinnamon, and then the spice and white chocolate comes in about 5 seconds later. It’s one of our craziest flavors—you definitely have to like spicy foods!

Georgia McIntyre is the director of content marketing at Fundera. She has written extensively about small business finance, specializing in business lending, credit cards, and accounting solutions. Georgia has a bachelor's degree in economics from Colgate University. Email: georgia@fundera.com.
Read more