How Pink Collar Jobs Have Changed Since 1940

The lesser-known concept of pink collar jobs likely originated in the 1940s during World War II when women entered the labor force in large numbers. Louise Kapp Howe, an author who focused on social issues, popularized the term in the late 1970s when she wrote about nurses, secretaries, and teachers—industries dominated by women at the time.

As a small business owner, you should familiarize yourself with the trends surrounding pink collar workers to understand what these jobs looked like eight decades ago, what they might look like in the future, and how you can undo gender stereotypes in the workplace.

Skip to our infographic for an overview of pink collar workers and ways to overcome gender barriers. Or, continue reading for an in-depth look at how these workers have changed over time.

As World War II dominated the 1940s and many men went off to war, women stepped into the jobs men left behind. As many as 5 million women entered the labor force between 1940 and 1945.[1]

Take a look at jobs with the highest percentages of women in 1940. Ninety percent or more of the nurses, midwives, telephone operators, secretaries, domestic service workers, and boarding housekeepers in 1940 were women, according to the 1940 Census of Population.[2] 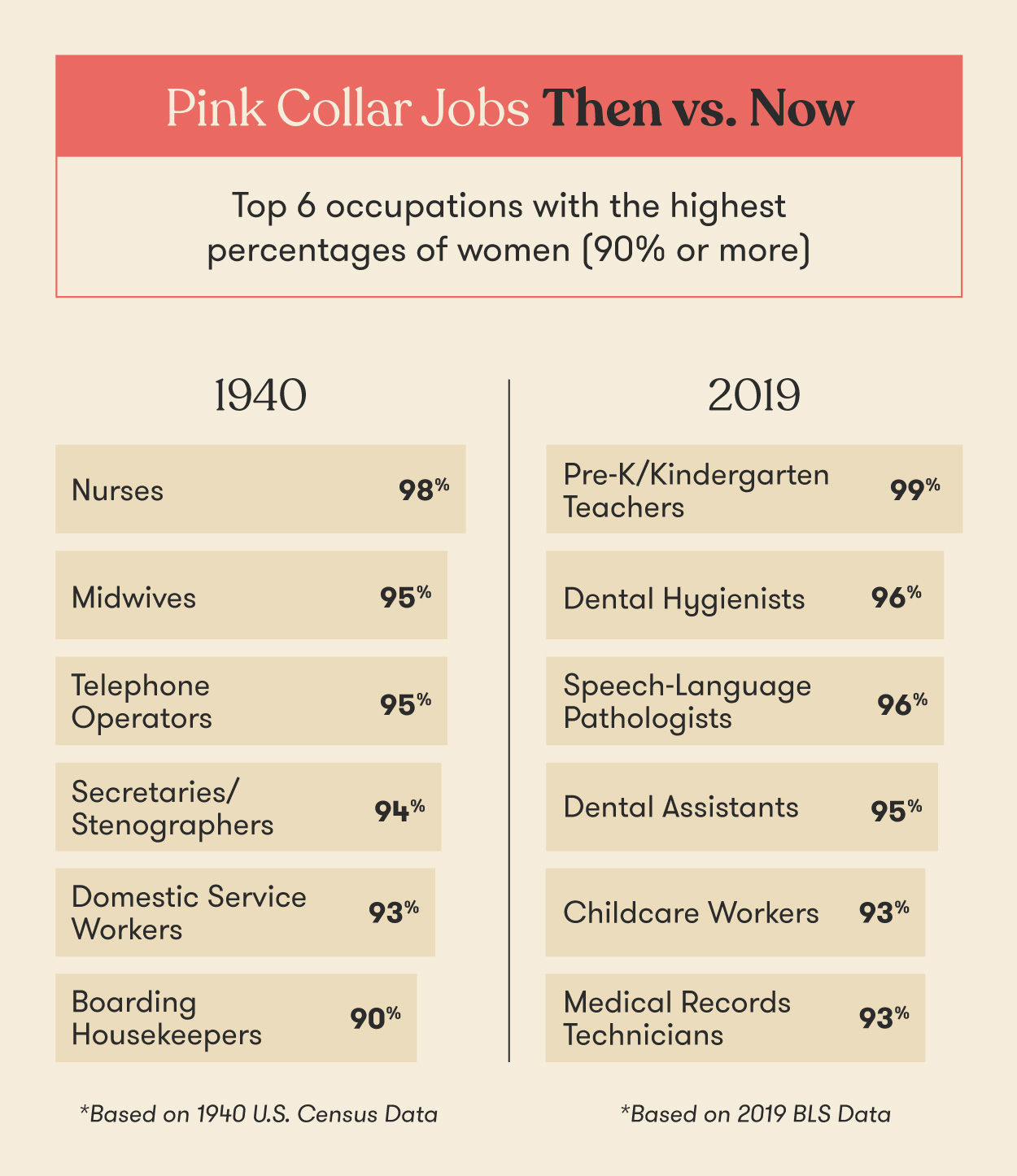 Notably, the percentage of women secretaries (93%) has stayed roughly the same throughout the 80 years since the beginning of World War II.

To more fully understand pink collar jobs and the evolving labor force, take a look at the jobs that have become more and less dominated by women over the past several decades.

Tobacco and textile manufacturing—two industries that were heavily female in 1940—have seen some of the largest declines in female workers, with decreases of 45 and 25 percentage points, respectively. Much of this decline can be explained by the fact that these manufacturing industries are among the most rapidly declining fields in the U.S., according to the Bureau of Labor Statistics.

Janitors and musicians have also seen hefty decreases in the share of women. 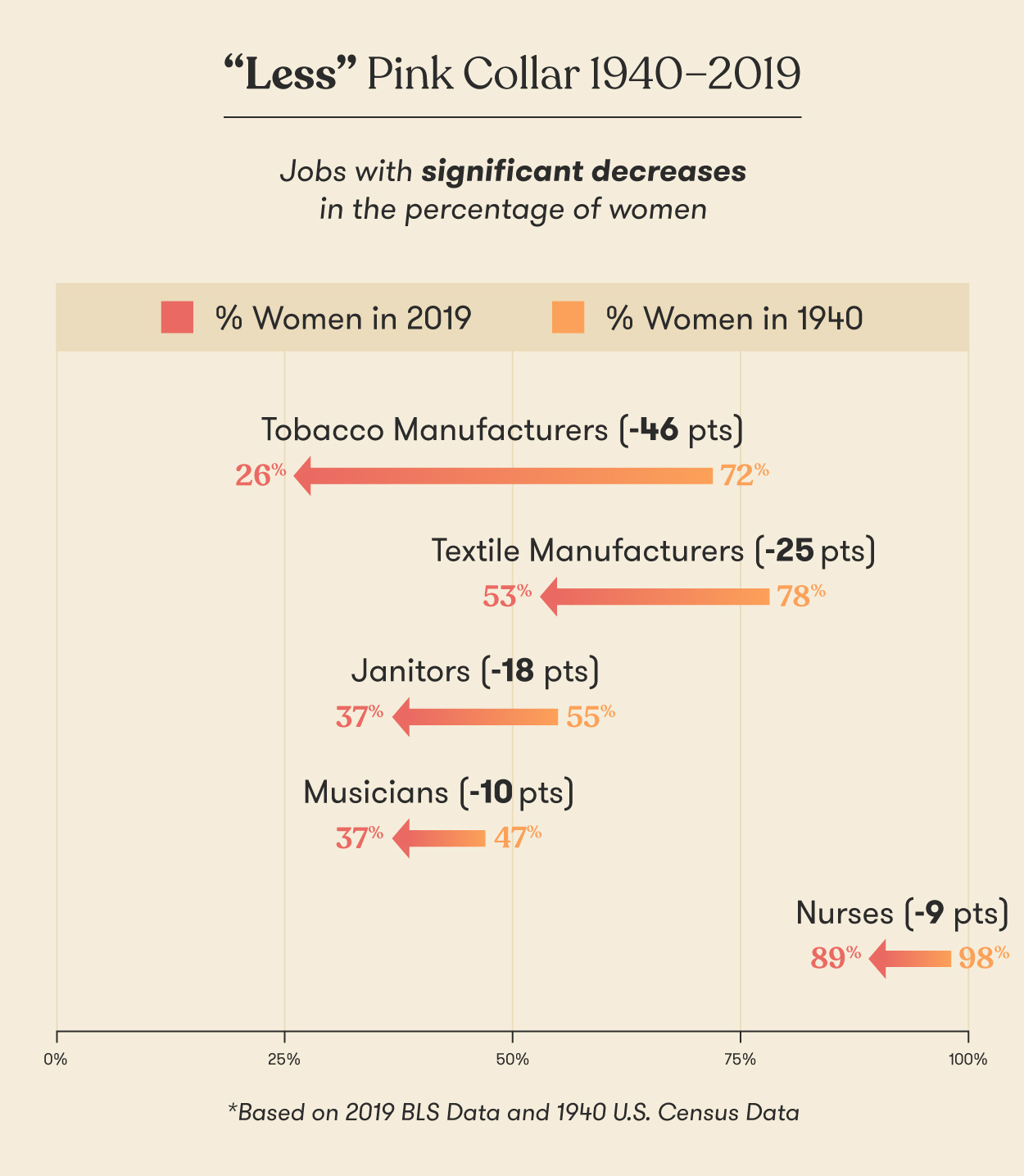 One of the most popular examples of the erosion of pink collar worker norms can be found in the nursing industry. The majority of nurses in the 1940s (98%) were women since caregiving roles were seen as women’s work.

Today, though women still dominate the field (89%), more men continue to enter the field. Economists and healthcare experts chalk this trend up to an increase in demand for workers in the caregiving industry, a decrease in the stigma surrounding nursing as a “woman’s job,” and a push by nursing schools to attract more men.

Other traditionally pink collar jobs, like teachers, private household workers, and secretaries, haven’t changed much since 1940. 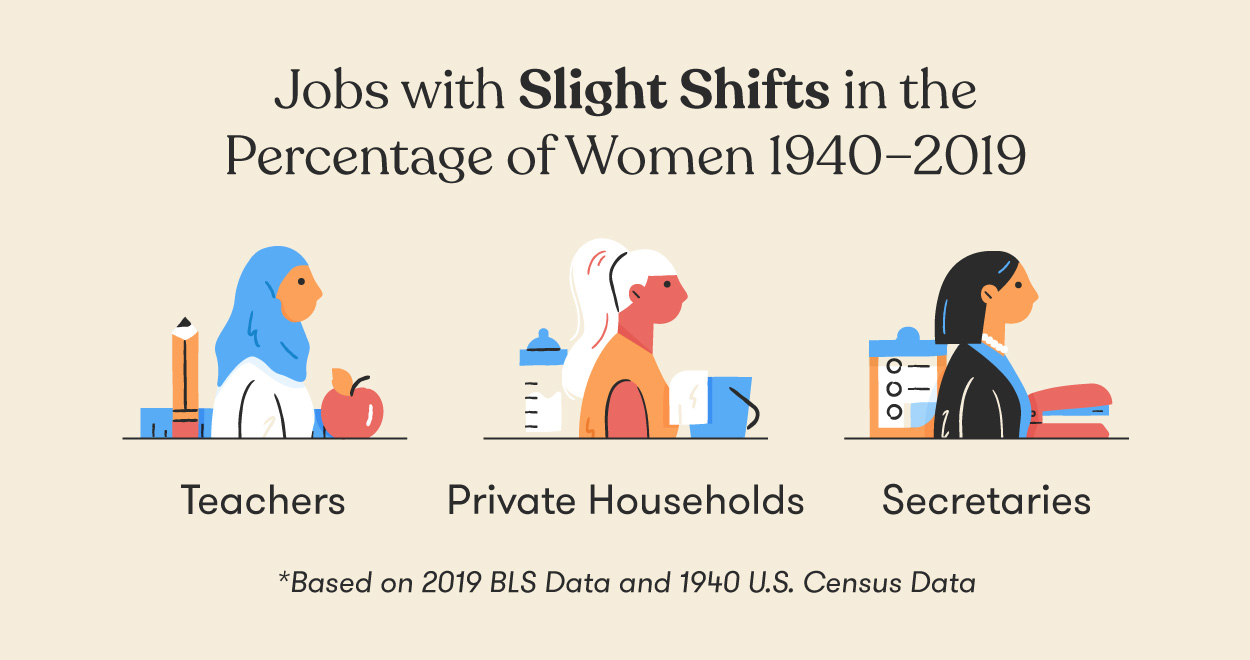 For example, among all teachers, 70% are women, compared with 74% in 1940. However, consider the differences between types of teachers.

On the other end of the spectrum, some jobs have become predominantly female. For example, while only 10% of real estate agents were women in 1940, women occupy 59% of these roles today. 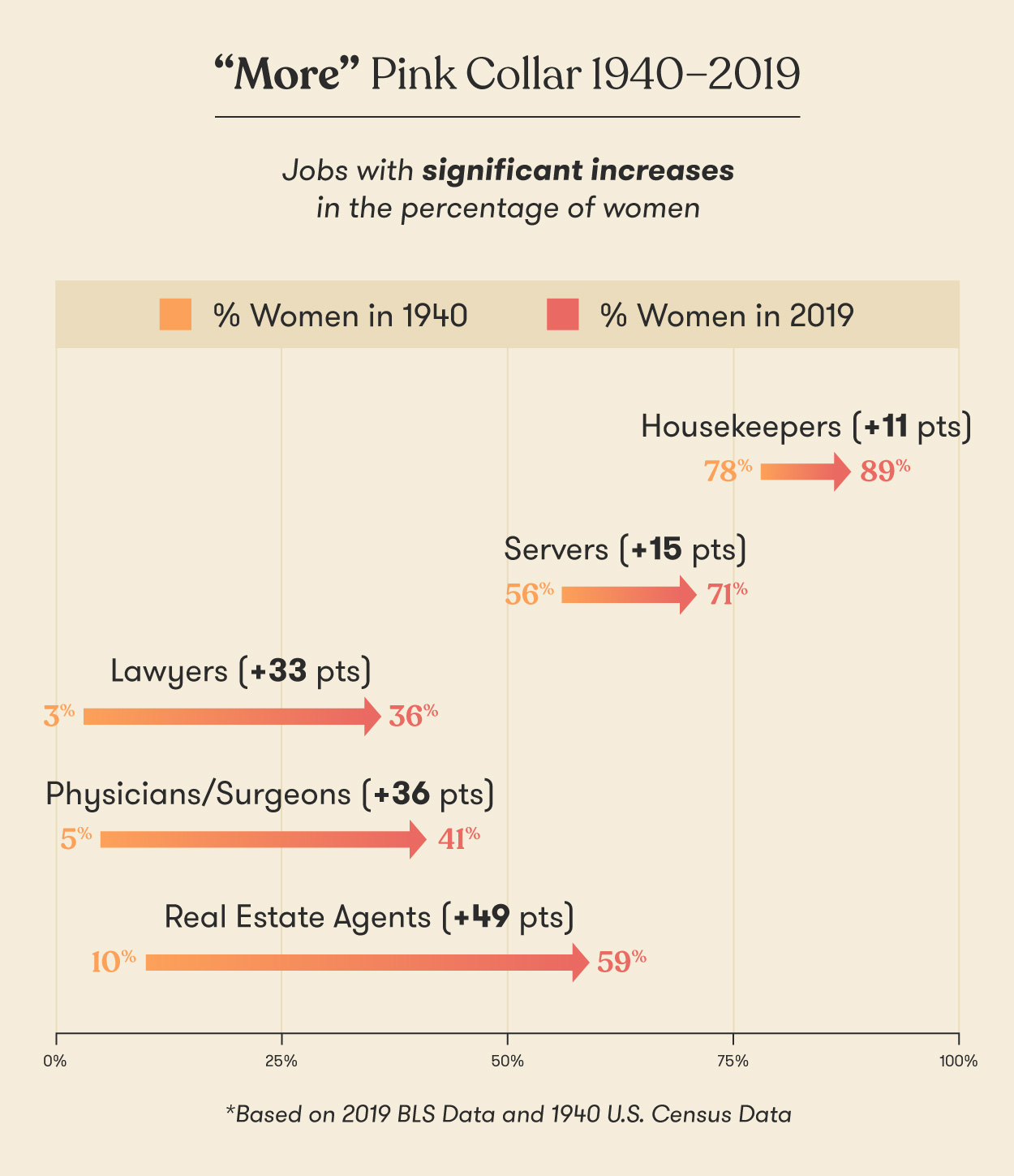 Why Are More Men Working in Pink Collar Jobs?

Many factors—globalization, technology, and the shrinking of unions—have contributed to the disappearance of blue collar jobs, which tend to be held by men.

Men hold the majority of roles in all of these industries except apparel manufacturing. On the other hand, all four of the most rapidly growing industries—home healthcare services, outpatient care centers, individual and family services, and offices of health practitioners—are predominantly female. 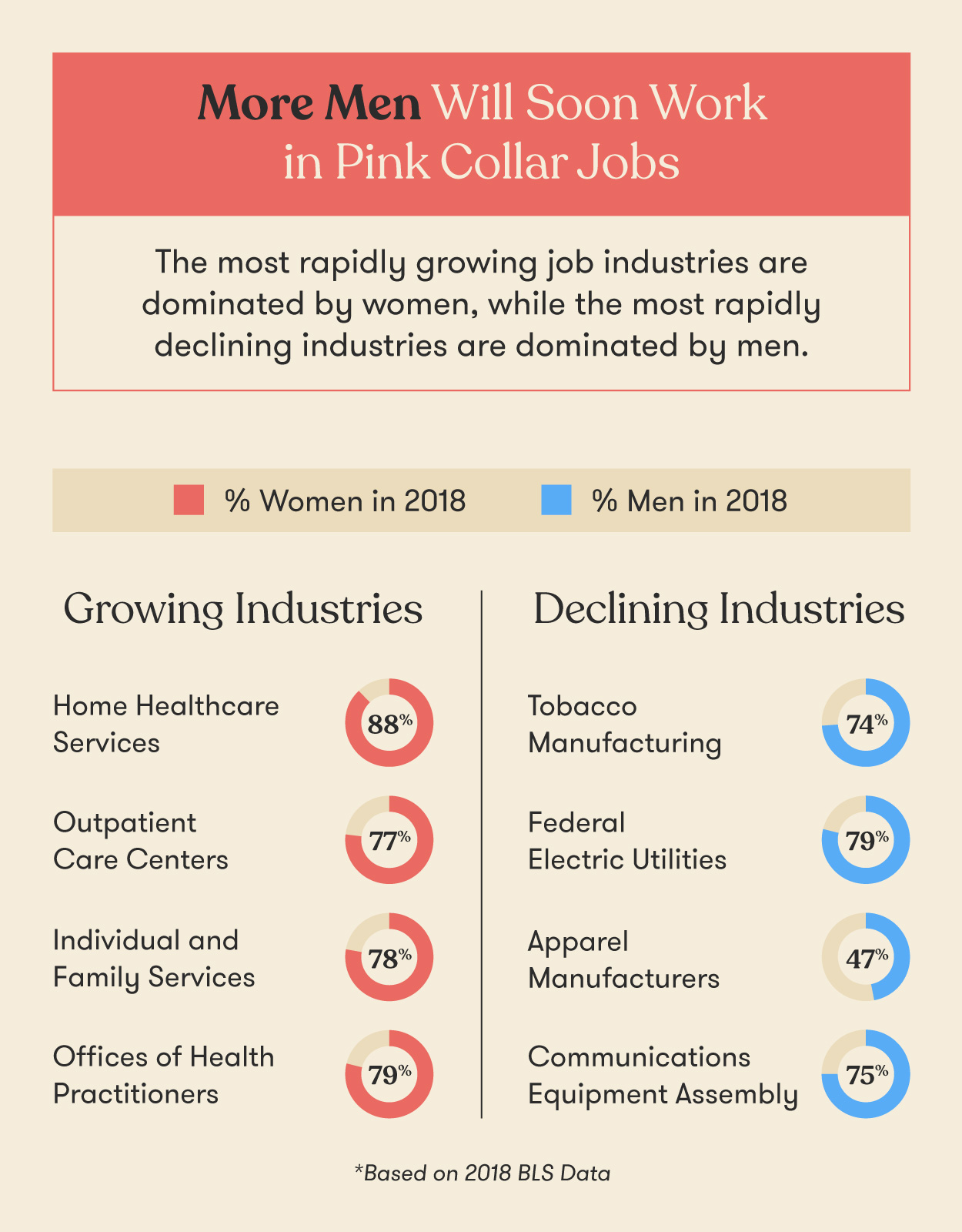 Naturally, over the next decade, more men will transfer to industries traditionally dominated by women to meet the growing demands of the economy.

Check out our infographic for an overview of pink collar jobs and ways your business can counter gender stereotypes at work.