For small businesses impacted by the coronavirus pandemic, actions taken by their state and local governments affected them as much (if not more) than aid and resources offered by the federal government. In a new survey, a majority of business owners said that their state or city’s response to the pandemic influenced how they’ll vote in the upcoming 2020 election.

While the federal government extended loans and grants to small businesses, decisions on how to restrict or alter business operations in the interest of public health during the pandemic have largely fallen to local governments.

In addition, some local governments have also offered financial lifelines of their own, such as grants and low-interest loans, in an effort to help small businesses stave off closure and bankruptcy.

Do small business owners feel that their local governments have done enough to help keep them afloat during this unprecedented time? And how will that impact their vote in the upcoming election?

Government-ordered shutdowns restricted operations for the majority of small businesses at some point this year.

In the interest of public safety and due to a lack of cohesive national response, many states and cities took drastic measures to curtail the spread of the novel coronavirus—including restricting or closing the majority of small businesses in their jurisdiction.

Most of our respondents were impacted by these orders:

Most businesses would have reopened sooner if not for those local government restrictions.

One of the biggest dilemmas of the pandemic has been how to balance public health and safety with economic concerns.

More than 50% of our respondents said that they would have reopened their business sooner than the local or state government would have liked—because, despite health concerns, that was the only way to stay afloat financially: 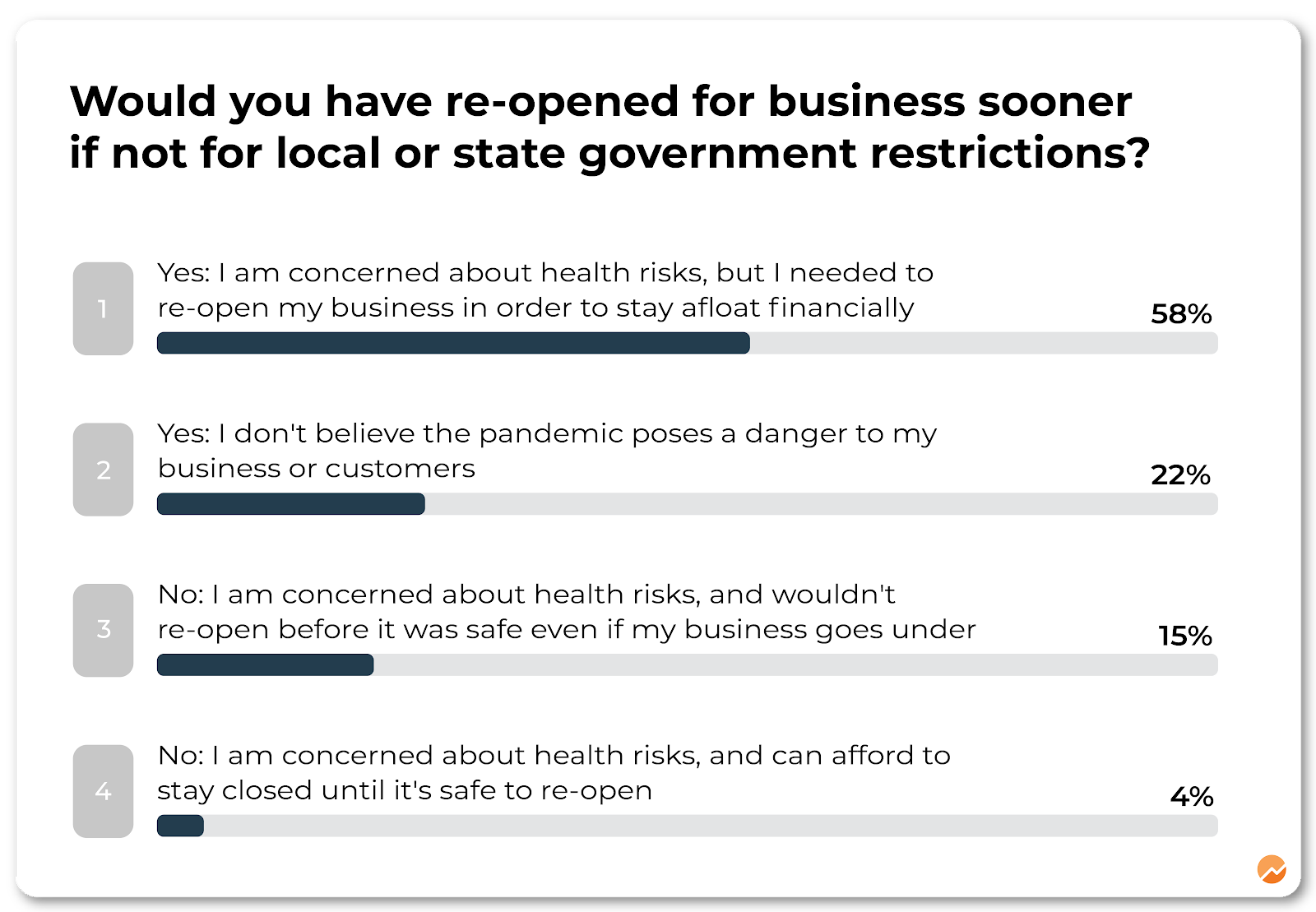 Only 4% of business owners said they were able to both abide by local restrictions and stay solvent.

Three out of five business owners say their local government’s response has influenced how they’ll vote in the 2020 election.

Whether they’re frustrated with restrictions on their business, a lack of helpful financial aid, or other concerns related to the pandemic, a majority of our respondents said their state and/or city’s response to the pandemic impacted their 2020 vote:

More business owners say their government’s response has them leaning toward supporting a Democratic and/or challenger candidate this year.

We asked respondents how the pandemic response had impacted their vote—giving them the option of saying they’re leaning Democratic, Republican, third-party, incumbent, or challenger. They could select more than one option—such as a Democrat and incumbent, or Republican and challenger.

By slight margins, business owners that say their state’s or city’s response to the pandemic has influenced their 2020 vote say they’ll support Democratic candidates: 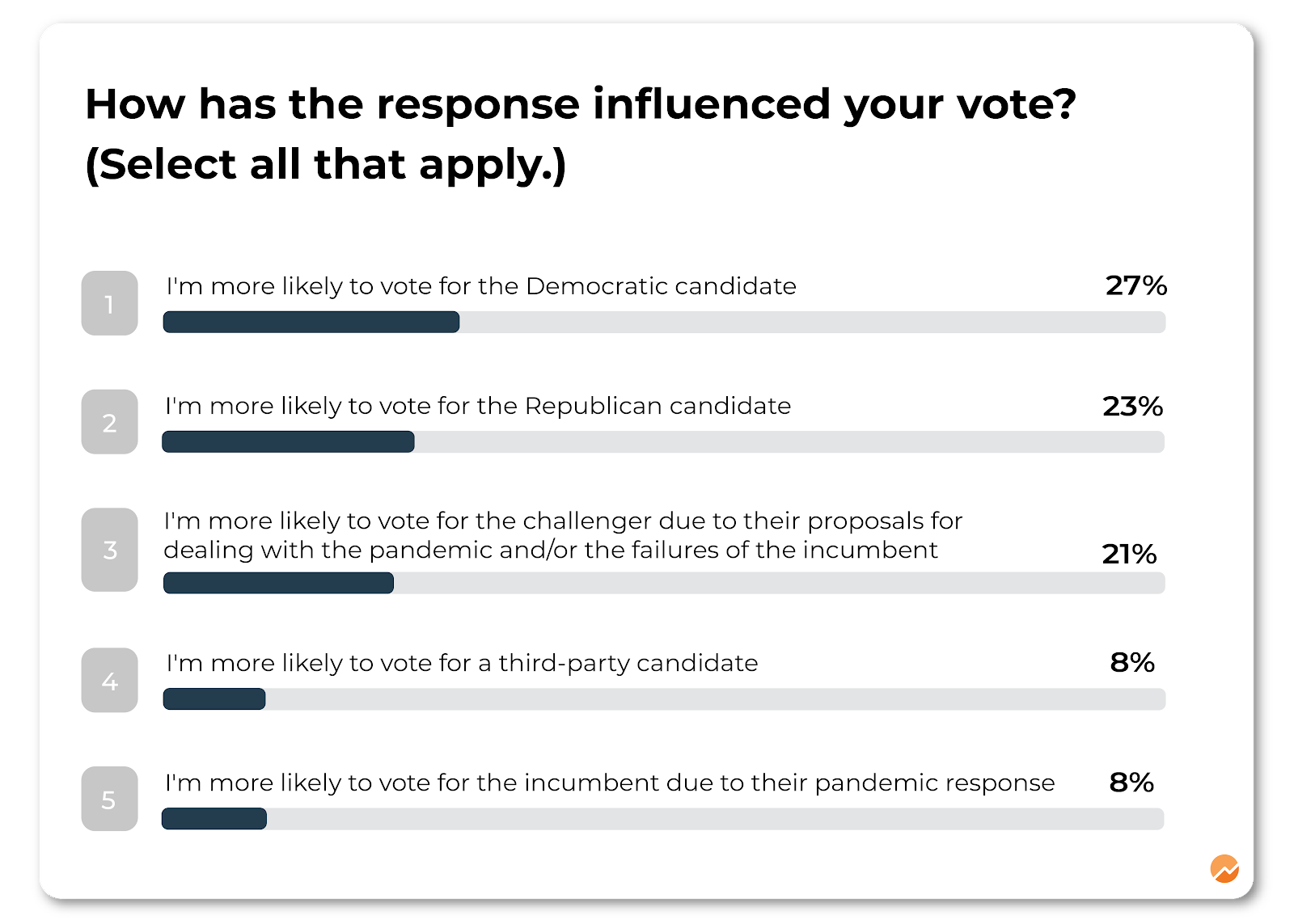 In addition, 21% said they’ll support the challenger candidate “due to their proposals for dealing with the pandemic and/or the failures of the incumbent,” as opposed to just 8% who say they’ll vote for the incumbent.

Not surprisingly, the way local and state governments have responded to the coronavirus pandemic—sometimes, but not always, in ways that were necessary for public health—has not just affected the way businesses are operating at this point, but how their owners feel about those institutions. The 2020 election is a vital one, and for many, it’s a referendum on choosing the leaders they think will handle the pandemic and its fallout most effectively going forward.