Small Businesses Aren’t Optimistic About the Outlook for the U.S. Economy, According to a New Survey from Harvard Business School

Brayden McCarthy is a credit cards expert and the former vice president, new markets at Fundera. He was previously a presidential appointee in the Obama administration, where he served as Senior Policy Advisor in the West Wing Office of the White House National Economic Council and the U.S. Small Business Administration.

Brayden McCarthy
Editorial Note: Fundera exists to help you make better business decisions. That’s why we make sure our editorial integrity isn’t influenced by our own business. The opinions, analyses, reviews, or recommendations in this article are those of our editorial team alone.

Last week marked the six-year anniversary of the start of the financial crisis. On the eve of the anniversary, the Fundera team took some time to reflect on how far we’ve come and how far we’ve still got to go with a blog last week.

Now, there’s absolutely no doubt that the American economy — and indeed small business owners — have made remarkable progress in recovering from the financial crisis. Real GDP is now 6.7 percent higher than it was at its previous peak in the final quarter of 2007. Real business investment has risen 28 percent since the end of the recession, and that’s compared to 20 percent over a similar period in the previous recovery.

Since the private sector started adding jobs again 54 months ago, businesses have added 10 million jobs; that’s the longest streak on record and, most importantly for us here at Fundera, that growth has been driven by small businesses. In fact, small businesses may have lost 60 percent more jobs during the crisis, but due in part to steps taken to shore up the financial system, small businesses have created jobs in every quarter since 2010 and are back to creating about two out of every three net new jobs.

But, while the economy appears to be heading up the right track, there’s increasing evidence that our recovery is being impaired by a less visible but more fundamental challenge, namely that our underlying economic “competitiveness” is eroding.

The word “competitiveness” sounds like an esoteric economics term, but it’s really quite simple. According to Harvard Business School, which has launched the first-ever effort to define and assess America’s economic “competitiveness”, the U.S. economy is said to be competitive if “companies operating in the U.S. are able to compete successfully in the global economy while supporting high and rising living standards for the average American”. Said more simply, the U.S. economy isn’t just competitive if big businesses do well; rather, we’ve got to make sure that citizens and workers and, yes, small businesses, are doing well too.

So, how is the U.S. fairing here? Well, in a report out this month, Harvard asked almost 2,000 business leaders nationwide (all of whom are alumni of the school), and about a third of respondents expected corporations to become more competitive within three years. Assessments of every element of the U.S. business environment improved between a 2011 survey and this latest one. The growing optimism “seems to reflect the cyclical rebound of the U.S. economy,” the report said.

But, what do business leaders think is in store for workers in the next three years? Only 27 percent expect workers to enjoy higher pay, while 41 percent said wages and benefits would be falling. Those are alarming numbers on their own, but it gets worse. 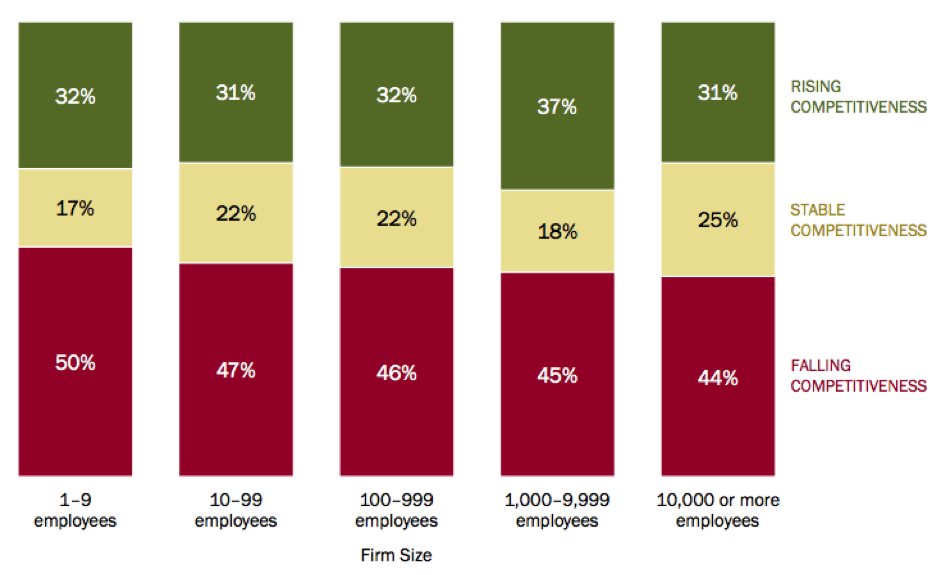 According to the report, “respondents in the smallest firms, with one to nine employees, were more negative, or less positive, on virtually every element of America’s business environment.” In particular, small business owners were less optimistic about America’s education system, regulations, infrastructure, and tax code. By contrast, larger firms were more positive than average on almost all aspects of the business environment. Michael Porter, the Harvard professor who co-leads the U.S. Competitiveness Project at Harvard, recently noted in a Fortune interview that part of this is because, “As our relative strengths in these areas have begun to disappear, it’s small businesses that are the canary in the coal mine, because large businesses have the ability to look overseas for better opportunities.” 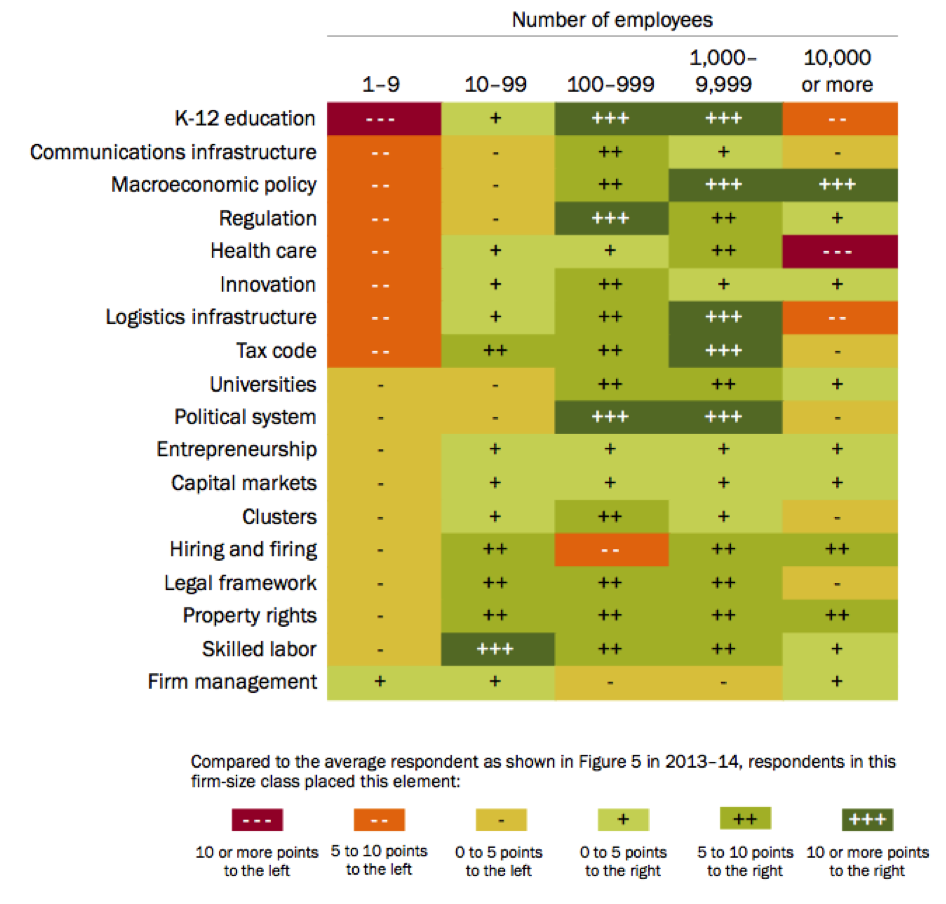 Harvard thinks that concerns of small business respondents to their survey resemble some long-term evidence of problems facing America’s small businesses. They cite, for instance, that growth in total employment in small firms has not kept pace with growth in large firms in recent decades.

Figure 3: Index of Total Number of Employees in Firms of Various Sizes 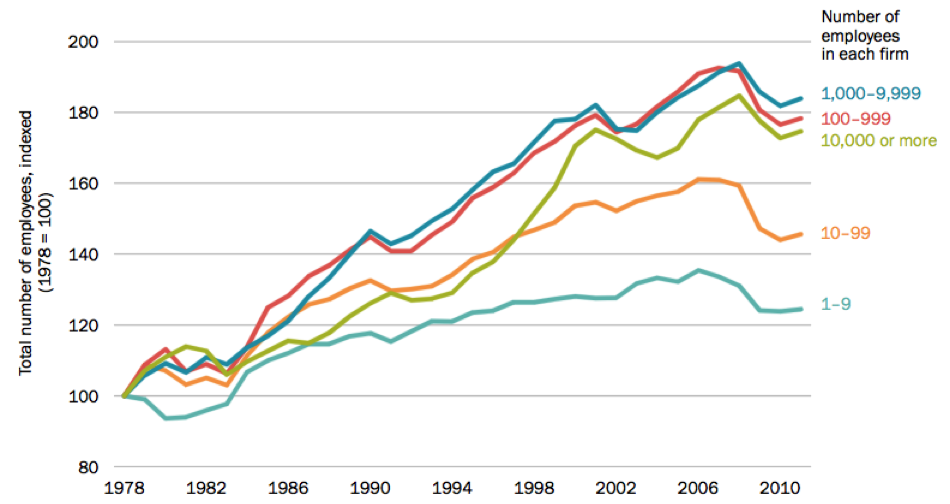 Moreover, the report notes data from the U.S. Census Bureau, which was first highlighted earlier this year in a report from the Brookings Institute’s Robert Litan and Ian Hathaway, that the number of companies dissolved in America each year has crept up and now surpasses the number of new firms founded in America, implying that the U.S. is becoming less and less entrepreneurial. Brookings found that the decline in U.S. entrepreneurialism hasn’t been isolated to specific industrial sectors and firm sizes, but rather it’s been nearly universal geographically for the last three decades—reaching all fifty states and all but a few metropolitan areas. 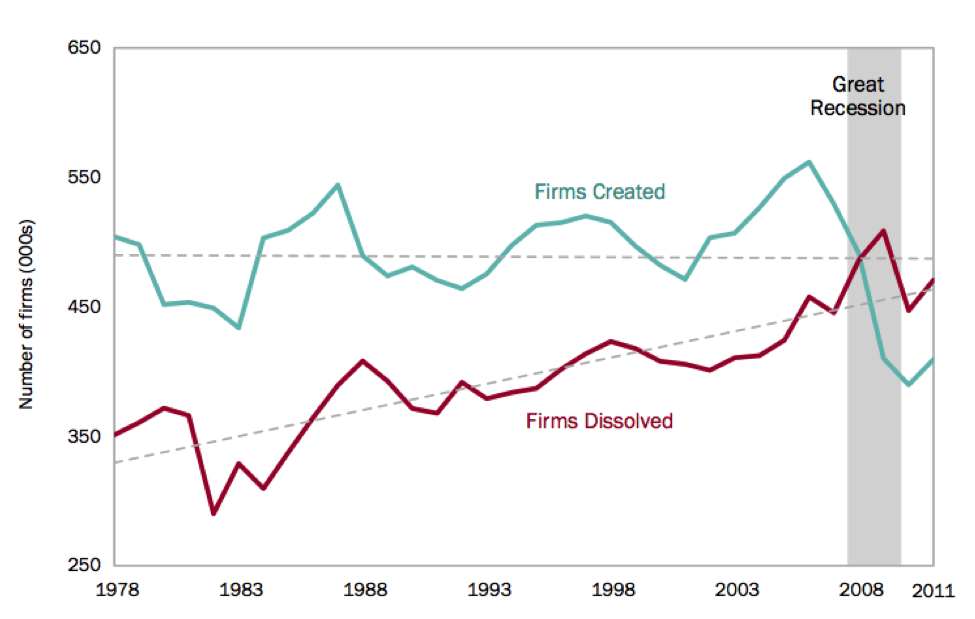 Overall, the survey findings on the U.S. business environment depict an economy that is roughly in line with what we’re hearing from the business owners whom we talk to every day here at Fundera. Entrepreneurs think the economy is getting better, but things aren’t back to where they were before the crisis, and they’re still feeling a lot of anxiety about the future.

At Fundera, we’re doing everything that we can to help small business owners get back on their feet, so that they can create the jobs that our economy needs right now. We think that a big reason why small business owners feel less confident today than they did prior to the crisis is because they lack access to capital. I first made this case in a Harvard Business School paper alongside Karen Mills, the former head of the SBA, which I wrote about on this site a few weeks ago. It was a decisive factor in my decision to join Fundera, as I mentioned in my first post on this site.

We’re working every day to open new points of capital access for small businesses, and make sure that the loan process is as simple, transparent and understandable to them as possible.

Brayden McCarthy is a credit cards expert and the former vice president, new markets at Fundera. He was previously a presidential appointee in the Obama administration, where he served as Senior Policy Advisor in the West Wing Office of the White House National Economic Council and the U.S. Small Business Administration.