What Is Trial Balance: Definition and Examples

You’ve hired a bookkeeper or engaged an independent firm to handle the accounting for your small business. Smart move! Now you can focus your time and energy on doing the things you do best to grow your business.

Things are flowing along nicely with this arrangement… and then your tax accountant presents you with an adjusted trial balance. Now you’re starting to wonder why adjustments to your books are needed. Does this mean your bookkeeper isn’t doing things properly?

Rest assured, getting an adjusted trial balance from your tax accountant doesn’t necessarily mean your books aren’t being kept accurately throughout the year. In fact, if your accountant isn’t voicing any concerns, chances are good your bookkeeping is just fine.

So, then, what is this adjusted trial balance? What should you do with it? How does it fit in with your other financial reports?

Let’s start by looking at what a trial balance is, and what it isn’t.

Before the creation and widespread use of accounting software, a business’s bookkeeping was done on paper, usually in books specifically designed for this purpose. The amount for each transaction was entered into the books twice (commonly referred to as double entry bookkeeping). Typically, the transaction either decreased or increased cash in one entry, and it either increased sales or expenses in the other entry.

An example will help clarify this. Let’s say you purchased some gourmet tea for your staff break room. The tea cost $75.00, and you wrote a check for it. The entry for this purchase would be:

Today, it’s easy to take the seemingly simple nature of recording this transaction for granted. Especially if you are using an accounting software with bank feeds enabled, you—or your bookkeeper —would post the $75.00 transaction to Break Room Expenses, and the data entry for this transaction would be done. Even if you aren’t using the bank feed feature, most accounting software only requires you to enter one side of a transaction. The other side is taken care of automatically as a feature of the software.

If you were to record this transaction on paper, though, the process would take more than one step:

You can probably already see the opportunities for errors here:

Computerized accounting software won’t allow you to post an out-of-balance transaction, but there was no such failsafe in manual bookkeeping systems.

And that’s why the trial balance was created. 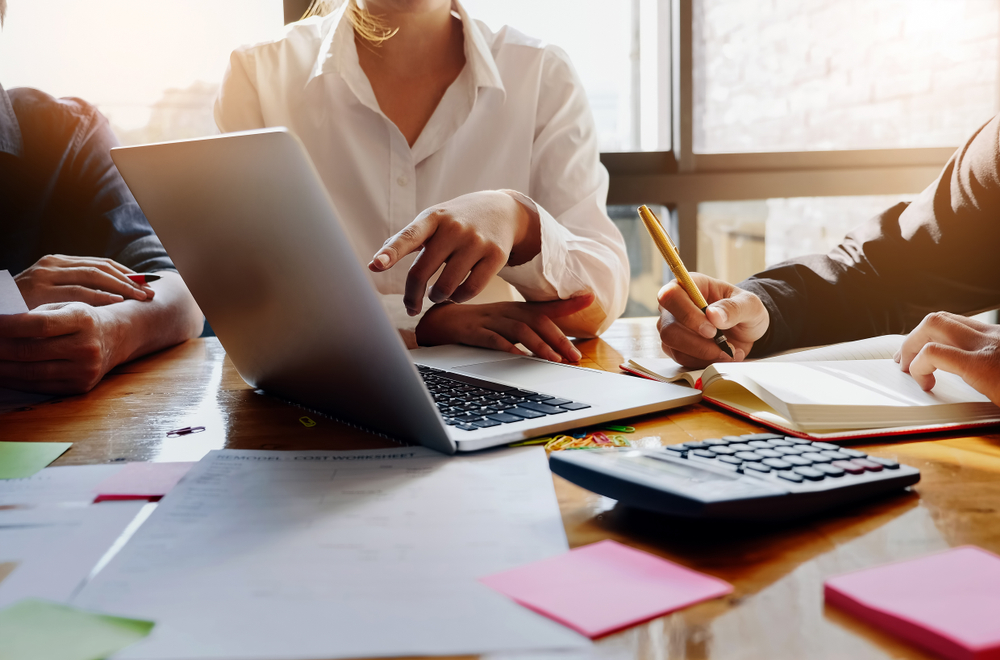 What Is a Trial Balance?

Going back to our example above, if you had transposed the seven and the five, or if you had entered the amount in the debit column instead of the credit column (or vice versa), your trial balance wouldn’t balance. This would then trigger the process of finding and correcting the error, and then entering the adjustment.

A (very simple) trial balance for our example might look like this, if the entry was misrecorded as $57.00 for Break Room Expense: 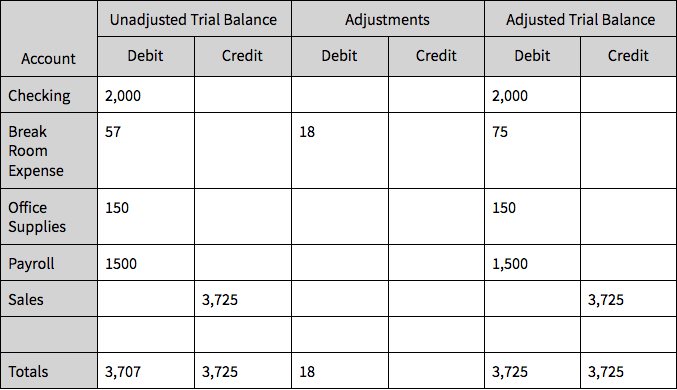 There is an $18 difference between the debits and credits in the first two columns of the trial balance worksheet. When we review our books, we find that the numbers were transposed when we entered the purchase for the tea, and so we make an adjustment of $18 to the debits for that expense account. Finally, we create the adjusted trial balance and total the columns to make sure they are now in balance. Phew! That seems like a lot of work—and it is. But it was a necessary step in making sure the books were kept in balance. Fortunately, this work happens automatically in today’s accounting software.

What a Trial Balance Is Not

A trial balance is not a failsafe. It is good for detecting transposed numbers, mathematical errors, and one-time errors in recording a transaction as a debit instead of a credit (or vice versa). But it will not detect transactions which are omitted altogether or transactions where the debits and credits are reversed for the same transaction.

Going back to our example, if the entry for the purchase of the tea was not entered at all, or if the checking account was debited instead of credited—and the expense account credited instead of debited—the trial balance would still be in balance, even though the books would be inaccurate. There are other steps in the bookkeeping process—such as the bank reconciliation process—which help detect errors of this nature.

What Is an Adjusted Trial Balance?

So, if the trial balance is more or less obsolete, why are we talking about it? And why did your tax accountant include one with your tax return?

The trial balance might not be used by bookkeepers much anymore, but accountants and auditors still frequently use it in their work.

Let’s start by looking at how your tax accountant might use a trial balance to prepare your books for the tax return. We’ll assume your bookkeeper has done an excellent job, all transactions have been recorded properly, and all your bank and credit card accounts have been reconciled.

When your accountant is reviewing your books, he notices your bookkeeper recorded a purchase to an asset account during the previous year. Under generally accepted accounting principles, this entry is correct; however, under the current tax code, this purchase falls under the safe harbor limit and can be fully expensed in the current year instead of depreciated over several years.

Your accountant might ask you to have your bookkeeper make an adjusting entry into your books to ensure the books match the tax return, but he also might not have a problem with your bookkeeper continuing to follow GAAP guidelines and depreciating the asset on the books over time, even though he has treated the purchase as an expense for tax purposes.

Now, you might have seen the word “auditor” mentioned above and be wondering about that. Many businesses—and most nonprofits—will from time-to-time engage an independent auditor to audit and provide an opinion on the books. During this process, the auditor will likely find some transactions he would like to see recorded differently in order to ensure the financial statements for the business accurately represent the business’s financial position.

The auditor will not make adjustments to the books himself. That would compromise the independent nature of his engagement. But he will create an adjusted trial balance and a set of adjusting entries to make to the books, which will bring the financial statements into alignment with his recommendations.

Even though it is no longer typically part of the bookkeeping process, the trial balance still plays an important role, especially for tax professionals and independent auditors. Since it is not a financial statement, it’s possible, even likely, you will not often see it or even hear it mentioned. Still, it’s important to understand the trial balance’s purpose.

If you are presented with an adjusted trial balance, ask your accountant or auditor to explain the adjustments made. They can help alleviate any concerns you have, or advise you if the trial balance indicates changes need to be made to how your bookkeeping is conducted.

Billie Anne Grigg has been a bookkeeper since before the turn of the century (yes, this one). She is a QuickBooks Online ProAdvisor, LivePlan Expert Advisor, FreshBooks Certified Beancounter, and a Mastery Level Certified Profit First Professional. She is also a guide for the Profit First Professionals organization. Billie Anne started Pocket Protector Bookkeeping in 2012 to provide an excellent virtual bookkeeping and managerial accounting solution for small businesses that cannot yet justify employing a full-time, in-house bookkeeping staff.
Read more