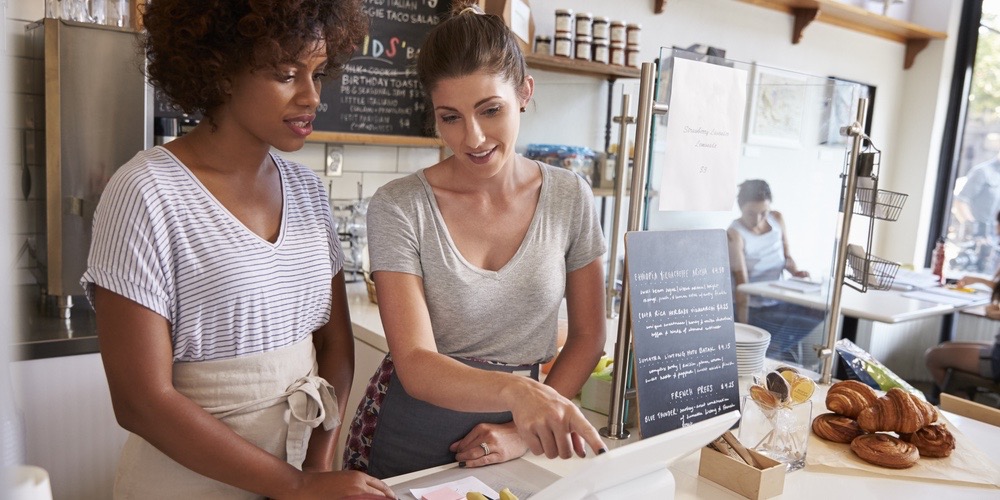 Just because the glass ceiling exists certainly does not mean that it should. And perhaps it’s just starting to crack: women own around 40% of businesses in the U.S.[1] In China, the world’s second largest economy? Women account for 55% of all entrepreneurs.[2]

This is great news. Studies, personal anecdotes, and experience tell us that women make great business owners, and in honor of October’s Women in Small Business Month, we’ve compiled a big ole list of just why that is.

Women are better at picking up social cues and reading emotional situations. Running a business with greater consideration for the people we interact with—including employees, customers, suppliers, etc.—makes for better leaders and more willing counterparts.

Women seem to inherently understand this. They want to take care of the people and world around them, and they sincerely treat people with respect. This is great news in a world where connecting and engaging are important to customers and the people we do business with.

A woman trying to run a business faces many barriers—undetectable prejudices from lenders, potential clients, etc. Many people still think they can take advantage of women because they aren’t historically the “type” to own businesses.

To be successful in business, women often have to work twice as hard as men to be taken seriously. Having to overcome this kind of underestimation makes women stronger in the long run and more ready to face that challenges that come with running a business.

Women have the ability to maintain multiple priorities and balance many different roles at the same time. They’re used to having a lot on their plate, and won’t shy away from the multifaceted day-to-day lifestyle of entrepreneurship.

4. They make their employees feel valued.

Women aren’t afraid to share the credit when things go well. It doesn’t have to be all about her. Acknowledging the accomplishments and contributions of others can make the entire company feel good about working toward a common goal.

In business, it’s often OK to second-guess yourself and consult other members of your team when making big decisions. In this way, women can save their company from unnecessary, miscalculated risk by being less prone to over-confident decision-making. Women tend to be more realistic about the dangers ahead.

6. But they’re not afraid to take risks.

Both men and women entrepreneurs say they are prepared to take risk according to research from Centre of Entrepreneurship.[3] But women lead the pack: 87% see themselves as financial risk takers, compared to 73% of men, while 80% of women say they are likely to see opportunities where others see risk, compared to 67% of men.

In a recent Center for Entrepreneurship study, “just 42% of women entrepreneurs in the study said their business was currently prospering, while 62% of male leaders described their performance in these terms.”[3] This does not mean female entrepreneurs aren’t doing as well as men: in fact, the same study respectfully reveals that women are actually performing more strongly.

It’s also common for women to be more open and honest about the state of their business. Discussing valid concerns and tackling big issues. This is because they’re not afraid this makes them “look bad.” They understand that this is a solution-oriented approach and can only serve to better the business.

8. They value general well-being and life outside work.

Even though women are hard workers, it doesn’t mean they want to burn out before they hit their goals.

Women understand that the business is enhanced by nurturing yourself outside of it—and making sure you get enough time with friends and loved ones makes one feel good about going back into work on Monday. This is great for their own capacity to run the business as well as those who work for her.

Women are better at nurturing the employees that report to them, which can only enhance the state and success of the business by inspiring and motivating people in the company. Helping those that help you makes any company run better—and more enjoyably.

Women love to work together toward a common goal and aren’t afraid to get input from others. Women understand that having more than one cook in the kitchen can add value to the whole recipe.

Women are notorious for starting businesses with less capital and using that capital more wisely. Women have seen and felt the value of social media and digital sales—often running businesses out of their living rooms—resulting in less overhead cost.

More women than men now attend college, and while you certainly don’t need a bachelor’s or business degree to run a business—it can be an added bonus. Having the college connection can be better for accessing funding or networking with vendors, suppliers, etc.

Additionally, as more and more businesses rely on technology, advanced degrees can give any entrepreneur an edge.

This is great news if you’re interest in long-term gains or want to remain employed at the same company for a considerable amount of time.

Twenty years ago, there wasn’t much interest in why women weren’t achieving the highest levels of success in business at a national level. Since it has become incredibly clear that women entrepreneurs drive economic growth and stability, many people are pushing to educate women and make sure they have comparable opportunities to create strong, healthy, vibrant businesses.

This isn’t always the narrative, but hear us out. Women are better negotiators because they don’t try to win negotiations outright. This would imply that someone has to lose, which isn’t always fair. Women value fairness because they’ve had to overcome so much to get where they are to succeed, so they tend to go into a negotiation with a win/win attitude. It should be noted that “fair” does not in any way mean “soft.”

Business doesn’t have to be all numbers and KPIs—and women don’t shy away from thinking outside the box. More and more, creativity is an important commodity. It’s important to be creative in every aspect of running a business, and women are more in touch with their creative side and the creative aspects of life in general.

It’s clear that what makes women women also makes them great entrepreneurs. A lesson for anyone is to not shy away from natural feminine attributes when trying to run a business—they are often more helpful than hindering.