Can You Write Off Unpaid Invoices? Everything You Need to Know

Can You Write off Unpaid Invoices?

Small business owners can write off unpaid invoices if they fit the following criteria: They’ve recorded the unpaid invoices in their accounting system, they’re an accrual-basis taxpayer, and they can prove to the IRS that they’ve taken reasonable steps to collect the invoice from the customer.

Unpaid invoices—as much as any business owner wishes they weren’t something to be considered, they are. You know the drill: You get a new customer, provide a product or service to them, and send them an invoice for payment. And then as you’re doing your books (in your accounting software of choice), you realize that money’s probably never coming. This likely leaves you asking yourself a simple question: Can you write off unpaid invoices?

Those answers matter because a write-off can affect both your bookkeeping and your taxable income. Similarly, the way you keep track of the invoice can be different for both of those options.

So let’s learn if you can write off unpaid invoices by to following a series of questions.

To determine if you can write off unpaid invoices, you’ll need to answer three specific questions.

Note that, as we go along, we’ll pretend we’re working with an invoice dated December 5, 2018, that is paid on January 15, 2019, so we can see how the same invoice is treated differently on our books and our tax return.

Question 1: Was the invoice recorded on your business’s books?

The first test in determining if you can write off unpaid invoices is whether or not you recorded the invoice in your accounting system. If you prepare and save your invoices using a computerized accounting program like QuickBooks Online or Xero, then the answer is yes.

That’s because when you save the invoice, automated systems add the amount to your books, and the invoice will appear on the reports generated by the system until it’s either paid or written off.

If you prepared your invoice using Word, Google Docs, or something other than your accounting program (and didn’t record it some other way on your books) then the answer is no, because the invoice (and income) won’t appear on your reports. Which means that there’s nothing to write off.

Question 2: Was the income from the invoice reported on your tax return?

The second test in determining if you can write off unpaid invoices is whether you reported the income on your tax return. Let’s keep going with that example of an invoice created in December 2018 with customer payment actually received in January 2019. An accrual-basis taxpayer would include the amount of the invoice on their 2018 tax return, while a cash-basis taxpayer would include it on their 2019 return.

And if that invoice is never paid by the customer, can you write it off? It depends on whether you’re an accrual- or cash-basis taxpayer.

So does this mean that you may need to write off unpaid invoices on your books and not on your tax return?

Actually, yes. If you use an accrual-based accounting system and file a cash-basis tax return, you’ll need to record a write-off to adjust the reports in your business’s bookkeeping, but you won’t write it off as a bad debt on your tax return. Remember, we can’t deduct a bad debt on our return unless we previously reported the income on an earlier return.

The following graphic breaks down this concept in simpler terms: 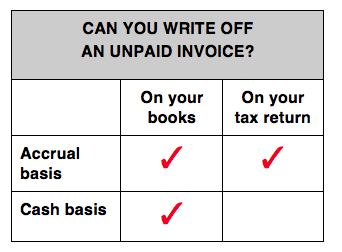 Question 3: What is the likelihood that the invoice will be paid in the future?

The last test in determining whether you can write off unpaid invoices is considering the likelihood that the invoice will be paid in the future. IRS guidelines say that in order to make a business tax deduction on the amount of the unpaid invoice as a bad debt, you must have previously reported the income on a prior tax return and be able to prove that you have taken reasonable steps to collect the invoice from your customer.

There isn’t a magic number of days that the invoice is past due that makes the invoice eligible for write-off, either. It’s the facts and circumstances surrounding the situation, plus whether the debt on the invoice is considered worthless, that determine whether you can write off the unpaid invoice.

In fact, the invoice doesn’t even have to be past due for you to write it off as long as you can prove that it was worthless when you wrote it off. This could happen if a customer abruptly goes out of business or tells you flat-out that they have no intention of paying you.

Your Next Steps If You Have Unpaid Invoices

You’re required to take reasonable steps to collect unpaid invoices before you write them off. This could include making phone calls to your customers, sending letters, or even hiring a collection agency to collect the debt.

If your customer’s payment habits are affecting your own cash flow, you could consider using invoice financing to help minimize the possibility of write-offs. Learn more about how invoice financing works if you’re considering this option.

How to Avoid Unpaid Invoices

You won’t be stuck asking yourself if you can write off unpaid invoices if you don’t end up having unpaid invoices to write off. So, how can you ensure that your invoices get paid in a timely fashion? And if they aren’t paid on time, what can you due to weather the storm from a cash flow perspective? Here are a few suggestions:

Progress billing is the process of incrementally invoicing clients for a project based on the percentage of work already completed. This type of billing is typically reserved for larger, long-term projects in order to help service providers maintain an adequate level of funding throughout the duration of the project. However, if you’re dealing with a customer who you think is a flight risk, or who is in a tenuous financial position, this could help ensure you receive at least a portion of the quoted price. What’s more, you can still write off the unpaid portion.

To arrange a progress billing structure, start by negotiating a contract that clearly defines the frequency with which you will bill based around project milestones (25% completion, 50% completion, etc.). You’ll then need to provide the client with a project timeline, and what will be needed in terms of funding at each step. When you reach each project milestone, send your client an invoice for a portion of the agreed upon total cost.

What’s more, almost any business can qualify for invoice financing as long as they have outstanding receivables. However, with invoice financing, your lender will typically charge a processing fee of around 3%. They’ll then charge a “factor fee” depending on how long it takes for your customer to pay up, almost always calculated on a weekly basis.

As you can see, there are ways to recoup some or all of your loss if you are dealing with unpaid invoices. You can write off unpaid invoices if you meet certain qualifications, or you can take steps to ensure that you don’t have an issue collecting invoices from clients. If all else fails, invoice financing can advance you a portion of the unpaid invoice until the client finally pays up. And if you need help asking for overdue payments, we have a guide for that too. Get a handle on your unpaid invoices and get your business back on track.

Heather Satterley is a contributing writer at Fundera.

Heather is founder of Satterley Training & Consulting, LLC, a firm dedicated to helping accounting professionals learn and implement QuickBooks and related applications. She works with sole practitioners and teams to streamline internal processes as well as consulting on a variety of client engagements.

With over 20 years experience as a bookkeeper, accountant and enrolled agent, Heather has helped thousands of small business owners and accounting professionals sharpen their skills and increase their confidence with accounting technology.

As a member of the Intuit Trainer/Writer network, Heather teaches QuickBooks to accounting professionals all over the country via live training events, webinars, and conferences.