It’s been over six months since the Paycheck Protection Program first began accepting loan applications from small business owners affected by the coronavirus pandemic. Since then, the majority of borrowers have been left in the dark on whether the federal government will forgive their loan, according to Fundera’s latest survey of business owners.

The PPP has undergone many changes since the program was first unveiled as part of the CARES Act. That’s part of the problem: Guidelines on how to use a PPP loan, what qualifies as the loan’s “covered period,” how and when to apply for forgiveness, and an array of other rules have been updated, clarified, and otherwise changed, as recently as August—well after millions of business owners have received and used their loan.

“Constant moving of the goalposts is understandable in the early weeks of the process, but to change rules months afterward is, to be kind, frustrating,” said one business owner who responded to our survey.

For business owners, many questions remain. How long until the SBA approves the many forgiveness applications in its pipeline? Will the government issue blanket forgiveness to loans under a certain dollar amount? Will there be another round of PPP, even for businesses that participated in the program already?

The question we have, then, is simple: How is this uncertainty affecting the business owners who took out PPP loans?

We surveyed PPP recipients about their PPP forgiveness experience so far. Here’s what they had to say.

Only one-quarter of PPP recipients have applied for forgiveness. For a number of reasons, the vast majority of business owners are waiting to even start applying for forgiveness.

90% of those who did apply for forgiveness have not received a forgiveness decision from their lender. Only in early October did the SBA announce that they had started approving PPP forgiveness applications—so it’s no surprise that nine in 10 business owners who have applied haven’t been told whether they were forgiven or not.

Businesses are waiting on their lender or the government to make a move. Why aren’t business owners applying for forgiveness? Reasons vary, but 71% of those who haven’t applied are waiting for their lender or the SBA to make the process more clear. In addition, 62% say they expect the government to automatically forgive loans under a certain dollar amount.

Most Businesses Haven’t Applied for PPP Forgiveness: Here’s Why

When the federal government agreed to extend the covered period of using a PPP loan to 24 weeks, up from the original eight-week timeline, business owners suddenly had more time to not just use their loan, but to apply for loan forgiveness.

This extended timeline is just one of many reasons why 74% of respondents said they hadn’t applied for PPP loan forgiveness. Of those, a full 97% said they did plan to apply for full forgiveness at some point.

Why is that? Although you might think that business owners would be eager to have this process over and done with, we found that many respondents are still waiting for clarification from their lender the government. The second-most common reason? Their lender hasn’t even begun accepting loan forgiveness applications.

Here’s the full breakdown of responses: 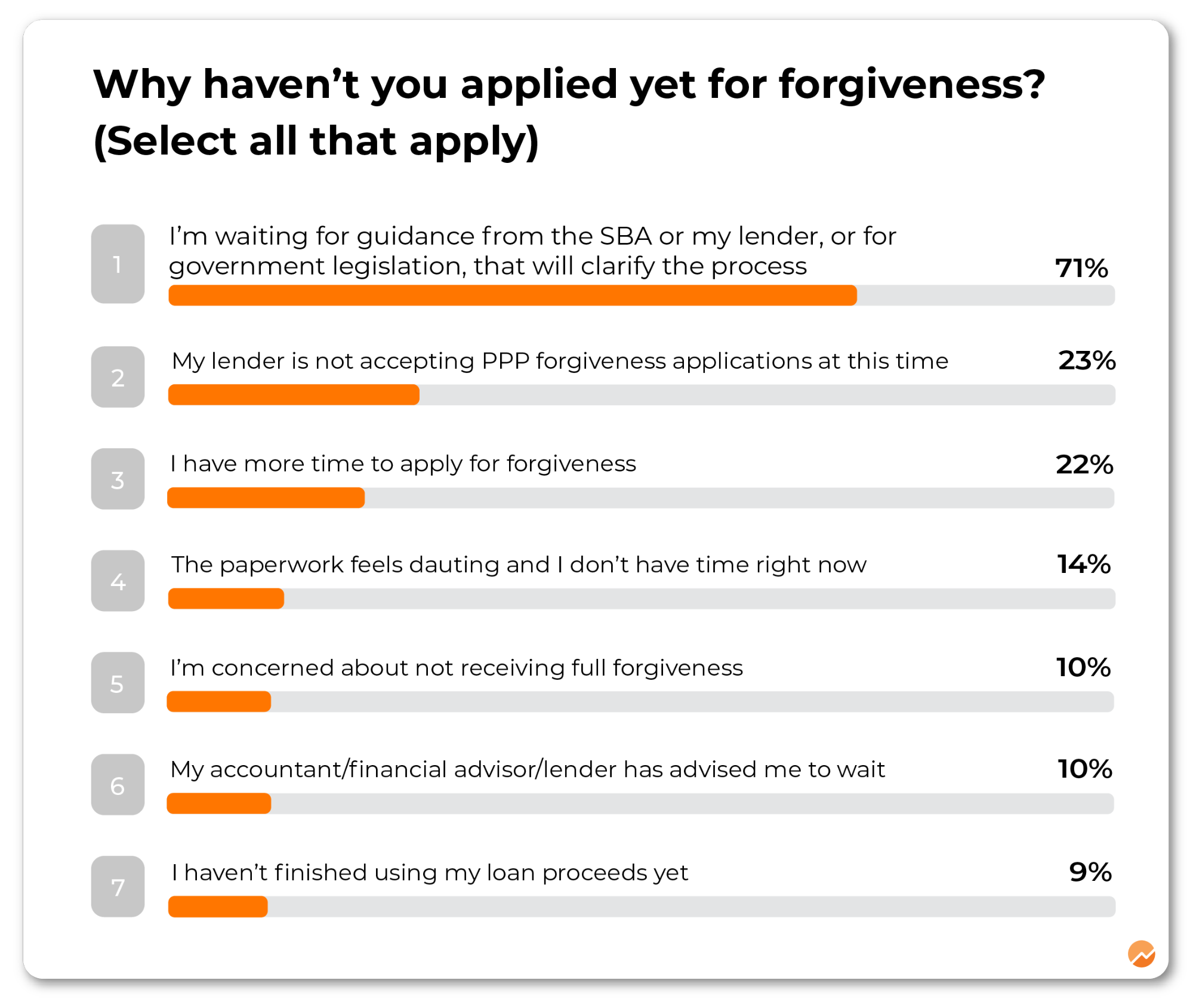 Few business owners are still using their loan at this point (9%). The bigger obstacles are a lack of clarification, understanding, and confidence in the forgiveness process.

“I would just like the government to give us clarity on the path forward—a possibly forlorn hope,” shared one business owner.

“I have no idea what’s going on with this. I have emailed the company that helped secure the loan, and I’ve emailed the lender, with no response. I really don’t know what to do,” said another.

A substantial portion (14%) also noted that the task itself feels daunting, and they don’t have time to worry about tackling the paperwork necessary right now.

“I would have appreciated automatic forgiveness for a loan of our size. I’m not an accountant and it will take a lot of my time to try to even get the EZ form completed with documents,” said another respondent.

Another major issue may be that there hasn’t been much communication or messaging aimed at small businesses that took out a PPP loan:

As lenders themselves look to receive clarification from the federal government as to how and when to process forgiveness applications, they are often not passing much information on to borrowers.

Those that have reached out to their lenders have sometimes received a response—but for the most part it seems many borrowers are either not interested in guidance, or it hadn’t even occurred to them to do so:

A mere 8% of respondents say they received a helpful response from their lender upon reaching out. For more than three times as many respondents to say that their lender has been silent is a concerning trend.

“I have not gotten any application for forgiveness nor have I gotten any emails or calls for next steps,” said one business owner. “I’m starting to get real worried about this.”

“This survey is the first I have heard that PPP loan forgiveness was even open yet,” said another.

Finally, one of the more telling responses to our survey concerned borrowers’ expectation that the federal government may decide to automatically forgive PPP loans under a certain dollar amount—no paperwork or bureaucracy required:

Automatically forgiving loans under $150,000 is a suggestion that has floated by trade groups and business owners, and discussed by politicians—but nothing definitive has been decided yet.

Forgiveness Has Been a Mixed Bag for Those Who Did Apply

The waiting game isn’t just for those who haven’t applied for forgiveness yet: 25% of respondents said they have applied. Of those, 90% said they have yet to hear back from their lender one way or the other.

Of the small segment of our respondents who say they have received a forgiveness decision, most say that the forgiveness process was straightforward. Some have had issues, however.

“I was a little confused about the required docs needed for forgiveness so it was returned. I have re-submitted and hope I now have what was needed,” shared one respondent. “I did email support and asked if what I was submitting was sufficient (to prevent being returned again) and I was just directed to follow instructions online… I waited a week for someone to tell me just to read what I already read and was asking for clarification.”

Some borrowers seem to be aware of the root cause of the hold-up (“Now I have to wait an undisclosed and unknown amount of time to get the confirmation of the PPP loan forgiveness from SBA”), while others are concerned that their lender is leading them astray (“The last I heard from my bank, [I was told] to not apply for forgiveness yet. I have heard nothing since. Hopefully their advice didn’t screw me over.”)

Even with the issues surrounding forgiveness, most business owners still say they need additional help in the form of another PPP loan.

In fact, 81% of respondents said that based on their businesses’ needs and their experience with PPP, they would take out a second PPP loan if the option was made available.

It’s important to note that many of these business owners say this even though they’ve already received additional help in the form of an Economic Injury Disaster Loan grant—43% said they received a grant through EIDL.

The Demographics of These PPP Borrowers

It’s no wonder that many of our respondents are eagerly awaiting word of whether loan amounts under $150,000 will be automatically forgiven. For them, it would be a welcome relief in a year filled with obstacles and obfuscation.

This survey took in responses from 786 business owners from September 28 to October 7, 2020.