The coronavirus pandemic is showing no signs of slowing down in the United States, and the country’s small businesses are paying the price. A new survey of business owners from Fundera shows that a majority feel the first round of financing from the Paycheck Protection Program (PPP) wasn’t sufficient to help them cover costs, and that they would apply for a second round of federal financing if it becomes available.

The federal government unveiled the PPP on April 3, 2020 in response to the pandemic, giving small business owners the opportunity to apply for low-interest loans that could be converted to grants if they spent a certain percentage on payroll and the rest on rent, utilities, and/or mortgage interest. These loans were meant to cover eight weeks’ worth of costs.

It has proven to be a temporary solution to a longer-term problem. Respondents to Fundera’s survey tell the story of what PPP has done for them, and what it hasn’t.

Four out of five business owners say they intend to apply for more relief funding. Many PPP loans are nearly exhausted, and for many businesses the timing couldn’t be worse as cases of COVID-19 rise across the country. That’s likely why 80.2% of business owners said they would apply for another relief program if it became available.

More than half say their PPP loan wasn’t enough. Exactly 55% of business owners said that the amount they received for PPP wasn’t sufficient for their expenses and needs.

Businesses impacted by the pandemic have needs beyond payroll. Although 78.7% of business owners said they would spend at least some of their PPP loan on payroll if there were no restrictions on usage, 50.3% said they’d use a portion of the loan for working capital, while 26% said they’d use it on implementing safety measures and protocols in the wake of the health crisis.

One-third of business owners say they used their PPP loan to rehire staff. About 31.6% of respondents said they intended to rehire staff using their loan, while 63.5% said they never laid staff off in the first place.

The PPP opened to many small business owners on April 3, 2020, with independent contractors and self-employed individuals able to access it a week later. Since then, there have been modifications to the program giving business owners more flexibility in how they could use their loan.

Of respondents to our survey, 78% said they were approved for a PPP loan. Of that group, nearly all of them (98%) chose to accept the loan from their lender.

How Business Owners Are Using Their PPP Loan

Once business owners received a PPP loan, their “covered period” began and they had 24 weeks (increased from an original eight weeks) to use their loan to their liking. But, in order to receive total forgiveness of that loan and have it converted to a grant, they needed to use at least 60% on payroll and 40% or less on rent, utilities, and/or mortgage interest.

How did business owners plan to use their loan? 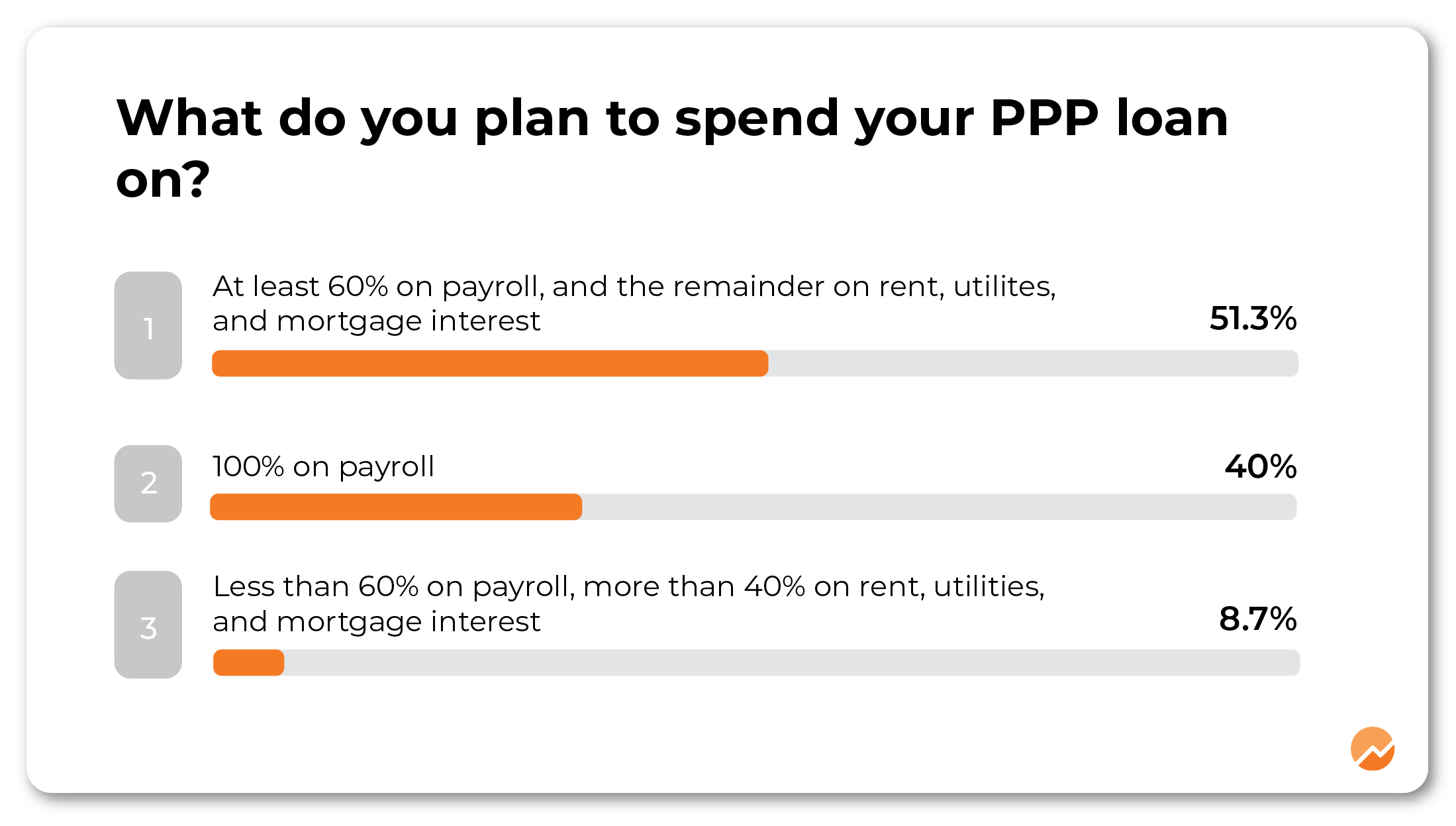 Only 8.7% of respondents said that they would spend their loan in a way that made it impossible for them to receive full forgiveness. A sizable portion—40% of respondents—said they’d use their PPP loan exclusively on payroll.

To spend their loan on payroll costs in a forgivable manner, small businesses would either need to maintain their staffing levels and wages as they were prior to the pandemic, or rehire staff/restore wages to pre-pandemic levels. 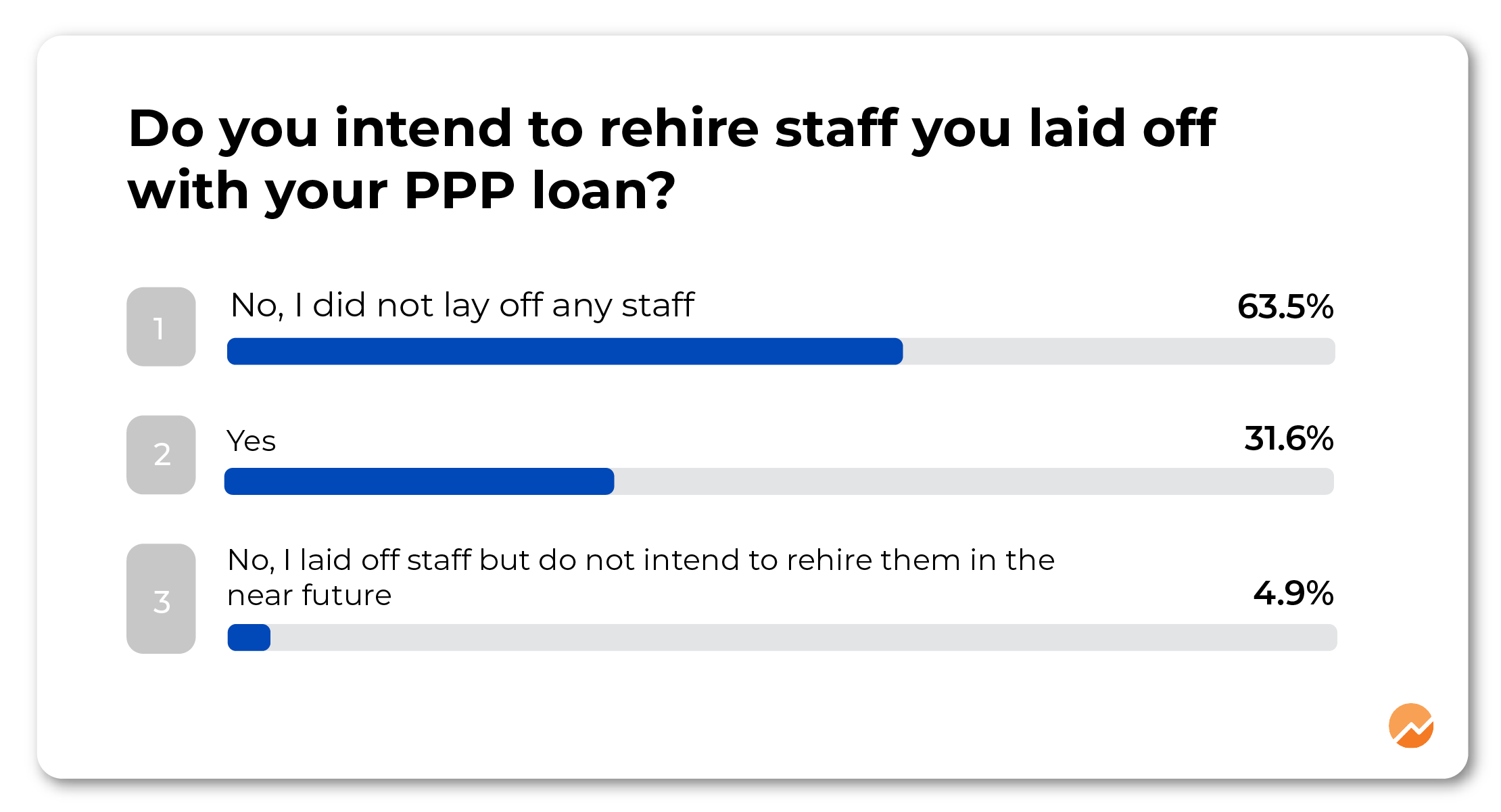 Nearly two-thirds said they had not laid off any staff. An MIT report says that the PPP may have helped save as many as 3.2 million jobs through the first week of June 2020.

That number may shift as the pandemic continues to ravage the country with no end in sight. As PPP funds dry up, businesses that were able to remain in operation may not have the working capital on hand to survive.

How Business Owners Want to Use PPP Loans

Early on in the life of the PPP, business owners across many industries asked for flexibility and nuance from lawmakers. Not every business was affected the same across industry lines, and some were more deeply affected in certain cities or regions at the beginning of the pandemic. Many called for the ability to spend more of their loan on rent, or for other purposes. Others wanted a longer timeline with which to spend the money and still obtain forgiveness.

Congress eventually passed the PPP Flexibility Act to address these concerns. Fundera asked business owners what they would do with their PPP loan if they had no restrictions on how they could spend it: 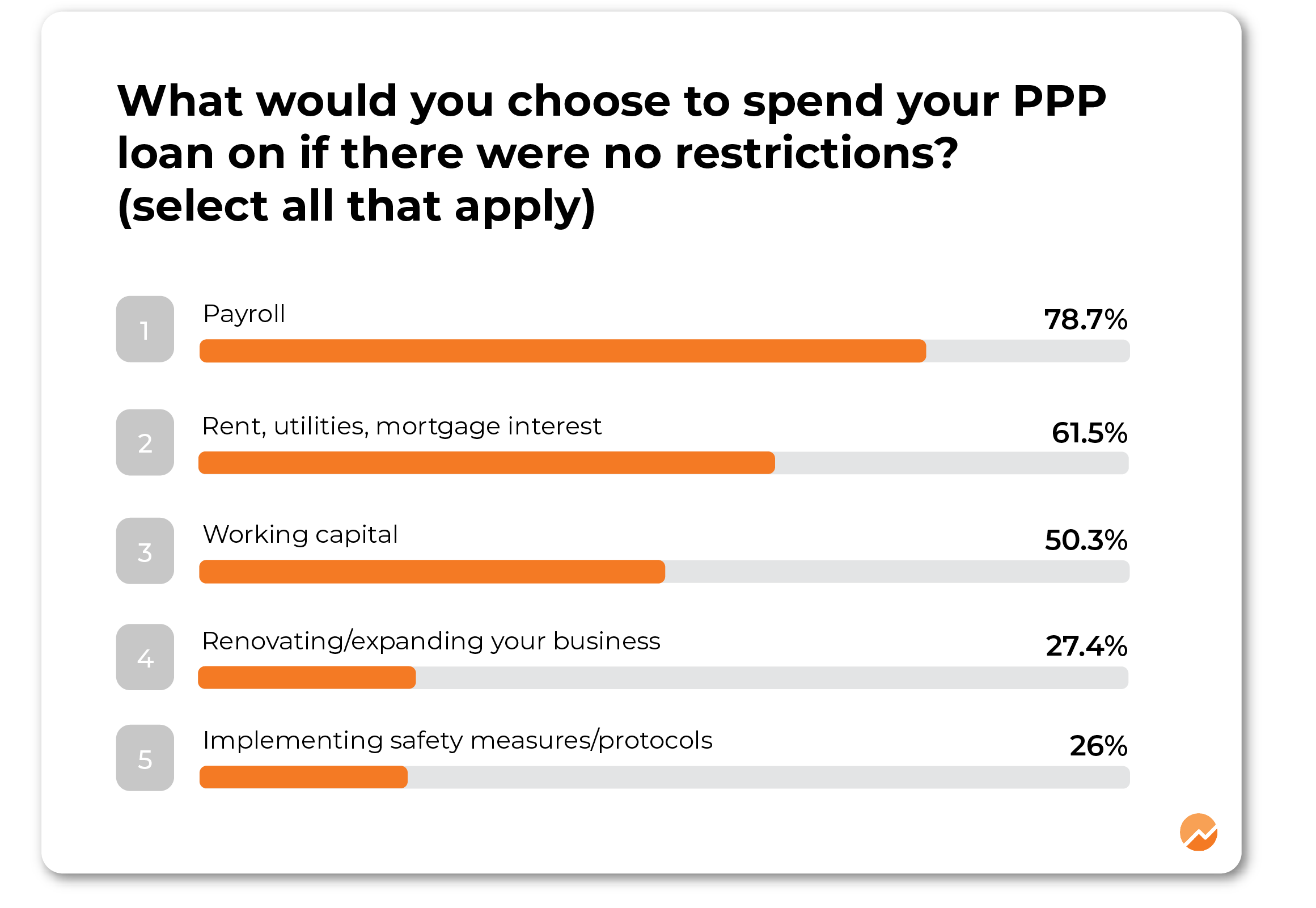 Payroll and rent, utilities, and/or mortgage interest are clearly paramount costs for small businesses to cover. But half of our respondents said they wanted to use the money as working capital, to cover whatever costs arise. Another 27.4% said they wanted to use the loan to renovate or even expand their business. Just 26% said they’d use their loan on safety measurements and protocols—this is especially noteworthy as lawmakers are reportedly considering making PPE and safety initiatives a forgivable expense in a subsequent round of PPP funding.

Businesses Want PPP Forgiveness, But Are Unsure If They’ll Receive It

One of the major appeals of the PPP is that loans can be forgiven if business owners follow proper guidelines on using them. Even though the interest rates and repayment terms on unforgiven amounts are generous, no business owner wants to carry debt that they don’t need to in the aftermath of this crisis.

Of the respondents to our survey that decided not to apply for a PPP loan at all, more than half said the rules around forgiveness dissuaded them, or they were able to survive the pandemic’s impact without the loan—implying that the possibility of added debt convinced them to operate without one. 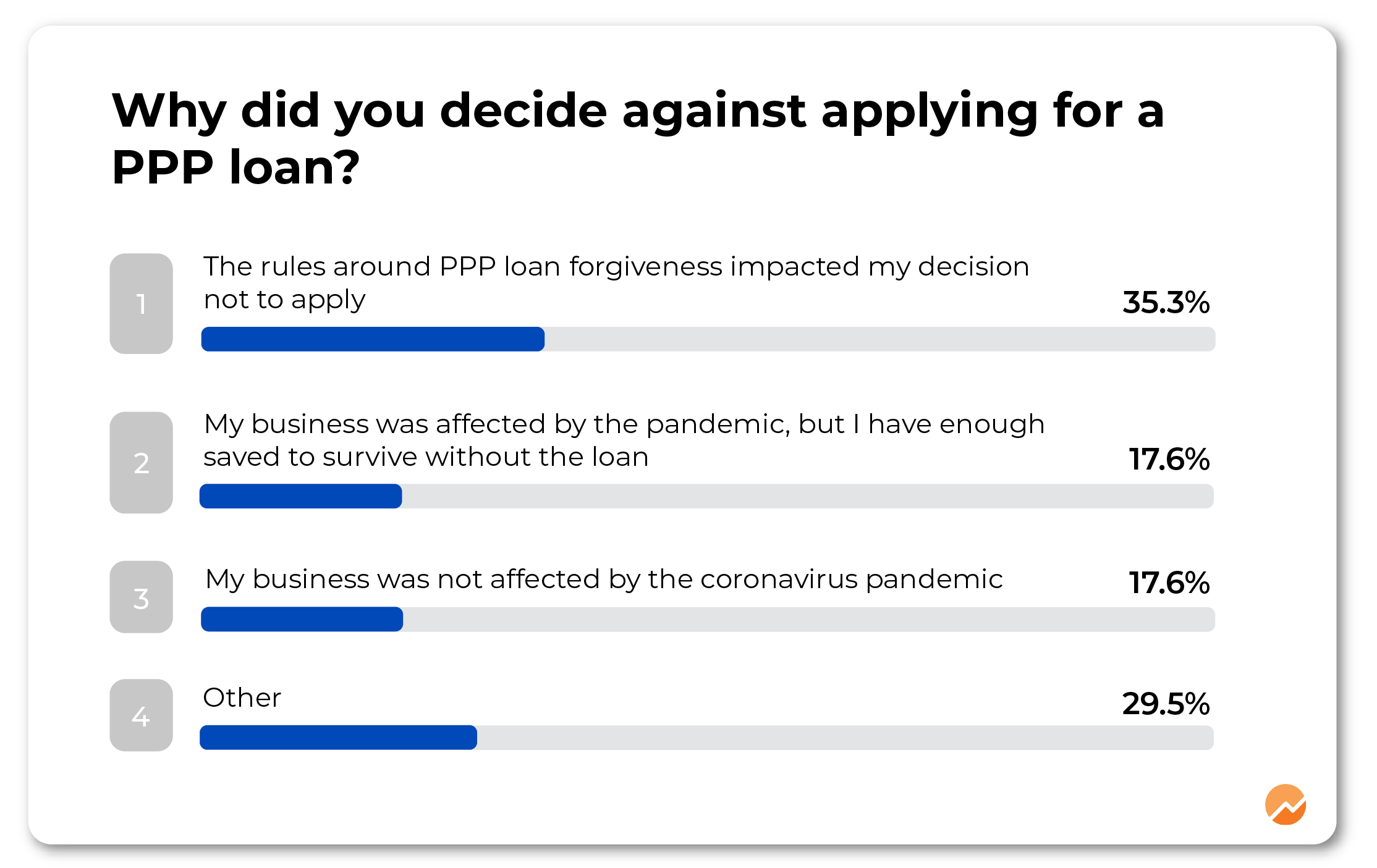 Of respondents who did receive a PPP loan, although the vast majority contend that they’ll seek full loan forgiveness, as many as 40% said they did not fully understand how they’d receive that forgiveness.

In fairness to these business owners, the rules around PPP loan forgiveness have been muddled from the start of the program. The rules have also changed, and the Treasury and SBA have released a deluge of clarifications and additional guidelines around questions of compensation caps, sick leave, income taxes, and much more.

More Funding Is Needed for Small Businesses to Survive

Small businesses are seeing massive drops in demand, and their ability to operate has been limited by stay-at-home orders, limited foot traffic, ill employees, and a host of other factors related to the pandemic. Losses are piling up and could get worse the longer the pandemic drags on.

Even before the U.S. began to see a resurgence in places like California and the Sun Belt, a majority of our small business respondents felt that PPP wasn’t enough to help them weather this unprecedented storm. More than half of the respondents to Fundera’s survey indicated that the PPP funds they received were insufficient for their current needs.

Perhaps unsurprisingly, 80% of small business owners see a continued need for relief, whether it comes in the form of a reshaped PPP or another program.

Congress is currently working out the details of another small business loan program, this time aiming funding at businesses that saw a drop in revenue during the pandemic. The program could also reportedly target businesses in low-income areas, which have had a difficult time accessing PPP funding in a timely manner or at all.

Regardless of what exact shape a relief program takes, it’s clear that the appetite for such help is there. Small businesses will require the government’s help in balancing staying solvent with staying safe.

The PPP has been an important lifeline for many small business owners and their employees. That being said, with the pandemic far from over—and in many places, still not reaching its peak—it’s imperative that the government listen to the needs of businesses that are struggling, even now, to survive.