When Donald Trump was elected in November 2016, there was plenty of speculation about whether or not he’d be the leader small business owners were looking for. While the economy has significantly improved since the Great Recession, many of America’s small businesses still struggle with issues like financing and government regulation.

Trump is a businessman—one of the most notorious of the 21st century—which made his election an exciting event for business owners. There was finally a president that would have an allegiance to business before politics. And, after the election in December, the NFIB’s read on small business sentiment jumped to its highest level since 2004.

But with Trump almost 6 months into his term, we wanted to check in to see where he now stands with small business owners.

What do business owners think about our current political climate now that Trump is in office? What’s their economic outlook for this year? What matters to them most in 2017?

To find out, Fundera and Qualtrics conducted a survey in May of this year, asking entrepreneurs across the country questions like:

Whether it’s the current political climate, the stock market’s record high, the Fed’s rising interest rates, or the unprecedented Trump administration, small business owners are affected by it all.

Here’s what they had to say.

1. Small Business Owners’ Approval Rating for the Trump Administration is Lower than the General Population 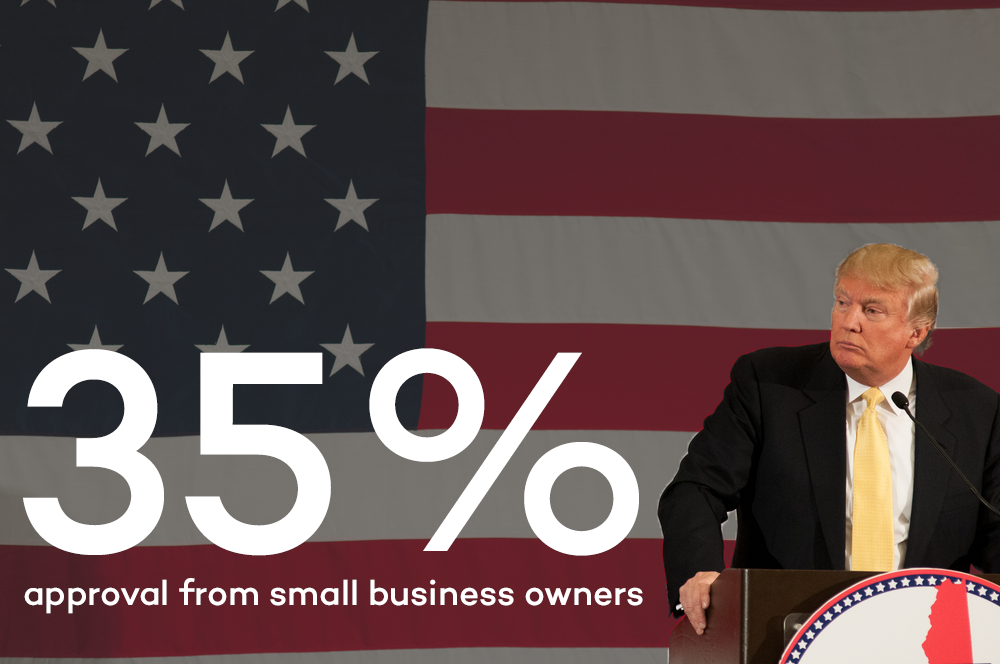 According to FiveThirtyEight’s latest calculation, Trump’s overall approval rating is currently at 39.6%. Our poll was conducted in late May when the approval percentage from FiveThirtyEight was at 39.1%.

Our findings show that for small business owners, Trump’s approval rating is even lower than for the general population—roughly 4 points lower.

As our study shows that 46% of small business owners surveyed do not approve of the Trump administration, we wanted to dig deeper into why.

What are these entrepreneurs’ opinions on legislative items proposed by the Trump administration over the past several months, such as tax policy and health care?

Changes to the tax code have a direct impact on small business owners as they affect both their bottom line and the benefits they receive from the government.

In April, the White House circulated a document outlining proposed tax cuts for businesses and individuals alike. While the finalized tax plan has yet to surface, the proposed plan indicated where the Trump administration hopes to make changes.

The results from our tax code question aligned with the June SurveyMonkey/CNBC poll, which found that 42% of business owners think Trump’s changes will have a positive effect on their business and 24% believe it will have a negative effect. Additionally, that survey found that small business owners overwhelmingly cited taxes as their number 1 concern while running their business. 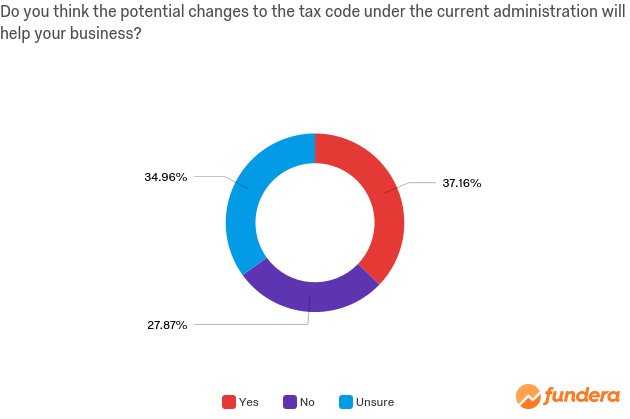 On May 3, 2017, the U.S. House of Representatives passed the American Health Care Act (AHCA), intended to repeal and replace the Affordable Care Act (ACA). The bill calls for the elimination of many key provisions of the ACA, including the individual mandate, employer mandate, and certain taxes and subsidies for subgroups.

Last Thursday, Senate Republicans introduced the draft of their plan: the Better Care Reconciliation Act. The current version of the Senate bill is similar to the House bill but with a few key differences including:

After much anticipation, the Congressional Budget Office released their score late Monday afternoon, predicting the bill would reduce the federal deficit by $321 billion over 10 years. The savings, however, would come at a cost. The budget office projects that by 2026, 22 million more Americans would be uninsured, compared with if the current law remained in effect.

When asked how they viewed the repeal of ACA, 42.54% of business owners surveyed supported the repeal, while 36.19% did not support the repeal. 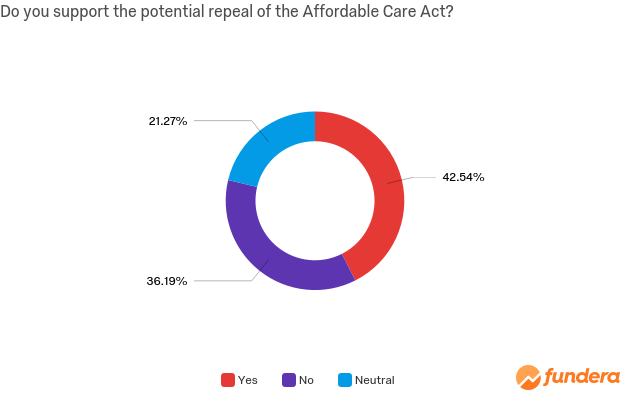 3. Small Business Owners Remain Confident in Both the Local and National Economy

Despite the high disapproval of the current administration, small business owners are optimistic that the national economy will improve. When asked if they expect the economy to improve or decline over the next year, 47.19% of small business owners were hopeful that it would improve and indicated a positive outlook.

This is an interesting finding because it’s a decrease of 5 points from the Bank of America Business Owner Report conducted in February 2017.

It’s important to look at the economic outlook at the local level as well. Small businesses are the lifeblood of communities across the country, and the key to building long-term economic growth starts with entrepreneurship in America’s communities.

Our data on this point aligns with the Bank of America Business Owner report from February 2017 that also found 50% of small business owners expect their local economy to improve over the next 12 months.

4. Most Small Business Owners Expect to Grow Their Businesses in 2017

While economic outlook at the local and national level is something small business owners care deeply about, they remain hyper-focused on the performance of their businesses. We asked a series of questions to gauge their outlook for their own companies in 2017 and found that entrepreneurs are generally optimistic when it comes to growing their businesses.

When asked, “Do you expect to grow your revenue in 2017?”, 85.09% of small business owners surveyed responded confidently.

According to NFIB President and CEO Juanita Duggan, small business confidence is directly correlated with the new administration. In her most recent statement, she said, “The remarkable surge in optimism that began last year right after the election shows no signs of slowing down.” 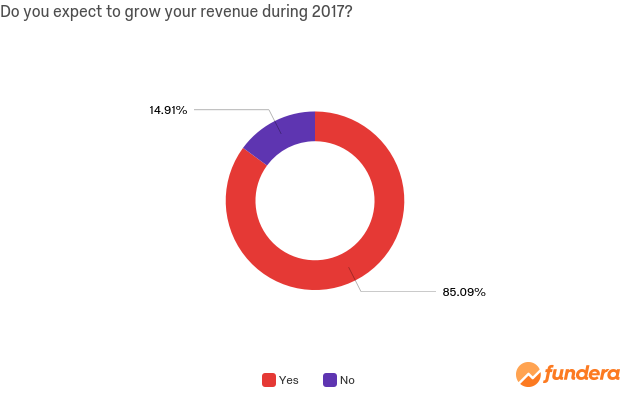 In terms of hiring plans, 97.06% of business owners surveyed plan to either keep their staff the same or grow their headcount during 2017.

Our study discovered that only 2.93% of small business owners have plans to decrease their staff.

So while there’s uncertainty related to the current administration, small business owners remain confident in their ability to grow their revenue and maintain headcount through 2017.

Of businesses that plan to increase their staff, we asked the follow-up question: “How many employees do you plan to hire?”

The majority of these growing businesses plan to hire more than 2 employees, with 42.47% planning to hire 6 or more employees.

Fundera and Qualtrics conducted a random survey of 409 small business owners and senior leadership at small businesses to examine the state of entrepreneurship in America. The survey was conducted online between May 24 and May 26, 2017.

The module below outlines demographics of our respondents.

Small business owners can be a tough group to characterize. They live in different parts of the country, work in unique industries, and operate businesses of various sizes. No business owner looks exactly alike.

But despite their demographic differences, many of these entrepreneurs share the same beliefs and feelings towards politics, policy, and the economy. While there were mixed emotions from our respondents about the current administration and the policy it has proposed, there was one topic where small business owners seemed to align: self-confidence.

We were encouraged by the responses from America’s job creators about their expectations about revenue and hiring plans for 2017. While the political climate is out of their hands until the next election, they are confident in their own ability to grow their companies. If their responses are any indication of what’s to come, we’re excited to see the economic growth from America’s 28 million small businesses over the next few years.

You can access a PDF version of the report here and contact us with any questions, comments, or concerns at content@fundera.com. We look forward to hearing from you.

Ben Johnson is the former content marketing manager at Fundera. He specializes in data-driven studies and life hack articles to help business owners prepare for the future.
Read more