Virtually all Americans have been impacted by the ongoing coronavirus pandemic. But not everyone has been impacted equally. For example, while the country’s richest people have actually seen a massive uptick in wealth since the start of the pandemic, many small business owners have had to fight tooth and nail to keep their businesses afloat.

In addition, not all small business owners are facing the same obstacles. While business owners in some states have seen operations return to relative normal, others have seen a large negative effect on their bottom line that they haven’t recovered from. Some don’t foresee a return to “normalcy” for their business, while others say they’ll need more financial assistance in the next six months to avoid closing for good.

As the country weathers yet another surge in COVID-19 cases and deaths, the economic recovery remains incomplete and uneven. Using data published by the U.S. Census Bureau, we can see exactly where in the U.S. small businesses are struggling the most, as of October.

A large negative impact can be felt all over the country. The economic impact of the pandemic is not confined to the “epicenters” of earlier this year, such as New York, California, and the Sun Belt. States where businesses reported an above-average “large negative effect” include Hawaii, Nevada, North Dakota, and Rhode Island.

New York- and Alaska-based businesses are having the most trouble. One was a pandemic epicenter; the other couldn’t be further away from that epicenter. But New York and Alaska were the only two states to appear in the “top five” of states with the most distressed businesses in regards to the data points we reviewed.

Businesses in Idaho are rebounding, relatively speaking. The one state where businesses are most consistently doing okay, relative to its peers across the country, is Idaho. It has the second-highest rate of businesses with operations that are back to normal, and the smallest percentage of businesses that report they’ll need financing help soon in order to survive.

About a quarter of all businesses need financial help right away. When asked if they’ll need financial assistance or capital in the next six months, nearly one in four businesses said yes. In some states, such as Alaska, New York, and Washington State, this number was even higher.

Note: Washington, D.C. businesses feeling a large negative impact clocked in at 45.1%, which is 14.9% higher than the nation’s average. 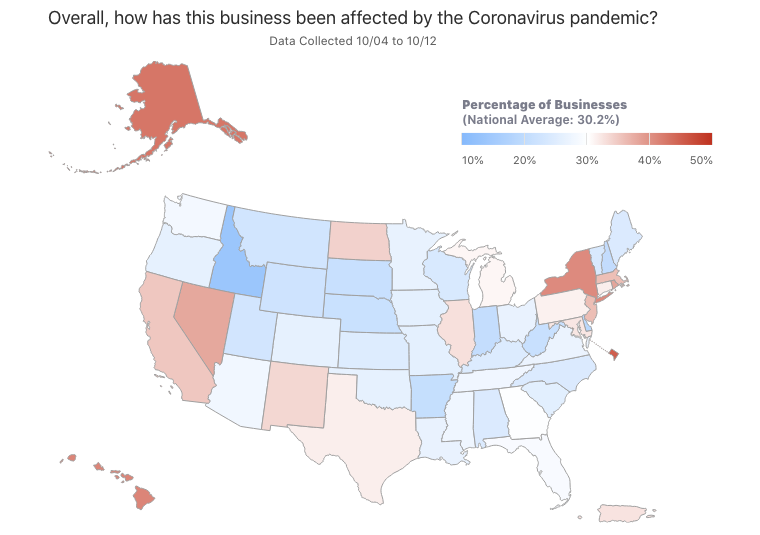 By contrast, the bottom six states in this ranking—meaning the states with the smallest percentage of businesses saying they’d experienced a large negative effect—are Idaho (only 13.7% reported this type of impact), Delaware (18.8%), New Hampshire (20.4%), Arkansas (20.8%), and South Dakota and West Virginia (tied at 20.3%).

One of the major themes of this pandemic has been whether small businesses can maintain the capital needed to pay their staff and keep their doors open. The federal government extended capital via the Paycheck Protection Program, and various state and local governments have offered various loans, grants, and other financial relief. Has it been enough?

According to these survey respondents, nearly a quarter of all U.S. small businesses (23.3%) will need financial assistance or capital in the next six months. Here are the states where that need is largest:

On the other hand, states such as Idaho (9.2% below the national average), Utah (7.3% below), West Virginia (6.8% below), North Carolina (6.3% below), and Alabama (6.2% below), have more businesses that feel they can survive without external financing or assistance for the time being.

Looking ahead, it’s almost impossible to know when things will return to “normal.” By many estimates, the country is entering what could be the most dangerous and deadly chapter in the pandemic.

That’s what makes the question “in your opinion, how much time do you think will pass before this business returns to its normal level of operations relative to one year ago?” asked to survey respondents so interesting. While few business owners were optimistic enough to believe things would return to normal in the next few months, some have already closed their businesses altogether—or see no path back to normalcy for their business.

Answers to the question broke down as follows:

These are the states where the highest percentage of small business owners responded that they did not see their business returning to normal—there are some familiar states on this list, and some surprises:

States where more businesses are reporting that they’ve returned to normal levels of operation include Mississippi, Idaho, South Dakota, Maine, and Indiana.

Not surprisingly, the pandemic has made life difficult for small business owners across the country, in every region, both urban and rural. This data from the Census Bureau shows that the impact of the pandemic knows no borders, and while some states are faring a bit better than others, that can change as time goes on. The need for financial aid and a cohesive national response is crucial across all walks of life as we head into winter, and the world of small business is no exception.

For this report, Fundera reviewed data made public by the U.S. Census Bureau in its Small Business Pulse Survey. The data are from the week of 10/4/2020-10/12/2020, the most recent available.