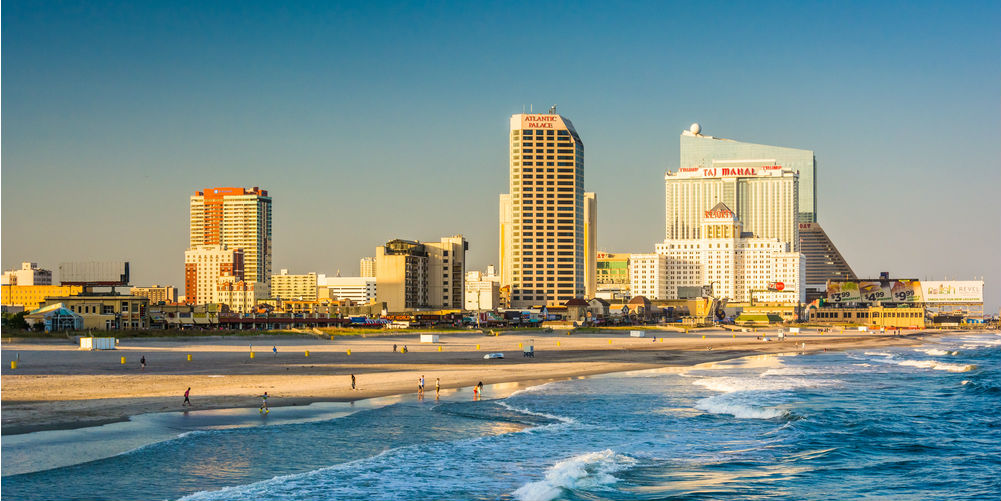 Bruce Springsteen, John Bon Jovi, Frank Sinatra, Martha Stewart, and Meryl Streep—what do they all have in common?

That’s right: they all hail from the Garden State! While New Jersey is the 4th smallest state by land area, it’s the 11th most populous state in the USA. Being the most densely populated state in the country has helped create a great business climate for the state.

There are many prominent industries in the state, with New Jerseyans working in finance, IT, life sciences, manufacturing, pharmaceuticals, and transportation. Plus, factor in its close proximity to New York City, and there’s a huge community working in hospitality, real estate, and retail.

But where exactly are the best places to start a small business in New Jersey? We turned to the most recent census data to find out.

This Bergen county city ranks #5 in our study. Hackensack is known for its many different neighborhoods and vibrant city center.

In our study, Hackensack scored well in many different categories. The city had 4.07% population growth from 2010 to 2015, with the population increasing from 43,000 to 44,830. The town also scored well for its high average revenue per business.

Fun fact: Hackensack was home to the original Van Gelder recording studio where Miles Davis, Sonny Rollins, and Thelonious Monk recorded many of their original tracks.[1]

Another Bergen County city—Paramus—is also famous for its shopping district. While the city has a population of only 26,970, there’s more than $5 billion in retail sales a year recorded in the town each year.

Paramus leads our study in two metrics—percentage of businesses with paid employees (37%) and percentage of owner-occupied housing (88%).

Fun fact: The movie Coneheads is set in the town of Paramus.[2]

Ramsey has the 2nd highest percentage of owner-occupied housing in our study, with 88% of owners residing in their properties. It scored high marks for its population growth of 4.04%, its large number of businesses (2,150) relative to its population, and 33% of businesses with paid employees.

Fun fact: Several scenes from the TV show The Sopranos were shot in Ramsey.[3]

When you look across the Hudson River from downtown Manhattan, you’re looking at the waterfront town of Hoboken. Its short distance from NYC has helped the city grow over the last decade—in fact, by 7.07% over the last 5 years.

In 2012, Hurricane Sandy severely damaged the both lower Manhattan and Hoboken with high flood waters. Since the storm, there’s been much investment in Hoboken that creates opportunity for entrepreneurs in many industries. Many startup companies have opened headquarters in the city of the past few years, including the large e-commerce company Jet.com.

Hoboken performed well across the board. But it scored especially well due to its large number of businesses (5946 firms) relative to its population and a very favorable unemployment rate (only 3.8%).

Fun fact: Hoboken is the birthplace of Frank Sinatra.[4]

And the winner for the Garden State is Secaucus, New Jersey. Located in the meadowlands in the northeast corner of the state, Secaucus is home to many different types of small businesses.

There’s a strong retail presence in the city with Secaucus Plaza containing factory outlets for many large chains. And many sports media franchises—including the MLB Network and the NBA—have opened locations in the city due to its proximity to the Meadowlands Sports Complex.

The town leads our study in Population Growth—with a 14.35% increase in population from 2010 to 2015. Over that five-year period, Secaucus grew from 16,700 to 19,100 residents! The town also performed well in our study due to its large number of firms (2,050) relative to its population and a large percentage of those firms having paid employees (32%). It also scored well for a high average revenue for each business in town.

This is the second article in our series examining the best cities for small business in America. Our first article looked at the business climate in Fundera’s home state of New York.

And with this interactive map, you can compare states on your own:

We’re big believers that small businesses are successful because of their communities. Our hope is that this data sheds some light on what makes certain cities “best” for small business and allows you to see trends in your home state!

Next time, we’ll be looking at another state. Let us know in the comments where you want us to head next!