How this Inventive Dog Toy Company Won a Contract With PetSmart 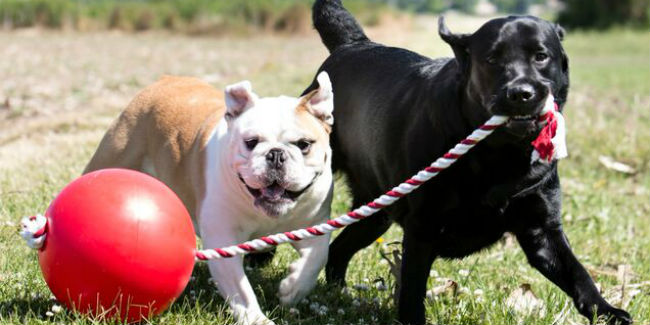 In 2013, Adam Harrington’s father tripped on a bowling ball inside his garage. Frustrated, he threw the ball into his yard — the perfect way to get this obstacle out of his way, for good. In that very yard, though, was one of Harrington’s 90 pound boxers, who thought that bowling ball was in fact a brand new toy. Big dogs love big toys, after all.

Hailey was curious about this accidental addition to her toy chest at first, but quickly became aggravated. She could push the ball, but couldn’t bite it. Seeing this, Harrington was adamant that this new “toy” not go to waste. He was frustrated that this seemed to be a cycle with his dogs; new toys are fun for a few minutes, but quickly forgotten.

So, he asked his father to drill a hole right through it, so he could loop a rope in the holes. Once completed, he proudly handed over his creation to Hailey, who went off dragging it all over the yard, and then thought nothing more of it.

The next day, Harrington’s mother came home to a eerily quiet house. She was used to an excited greeting from her 2 enormous boxers. In fact, this was a daily ritual. But, where were they? To her surprise, she found both her dogs fast asleep. They had worn each other out playing with their “bowling ball” all day.

When Harrington heard this story from his mother, he immediately knew he had stumbled on something great. As a dog lover and owner, he recognized how hard it was to find a toy that your dog wouldn’t lose interest in. He decided to play around with the idea more.

From Bowling Ball to Business Plan

Identifying early on that there should be a better option than a bowling ball (which would cost a ton to ship), he tried using a plastic ball in its place. Harrington had a winner. For starters, you could add weight to the ball with water, making it easy to play tug of war with your dog without them dragging you across the yard. Even more importantly, you could adjust the weight based on the size of your dog. And, if you didn’t add water, it could be used as a pool toy for the dog. A multi-functional toy for dogs of all sizes? Harrington realized he had something special. 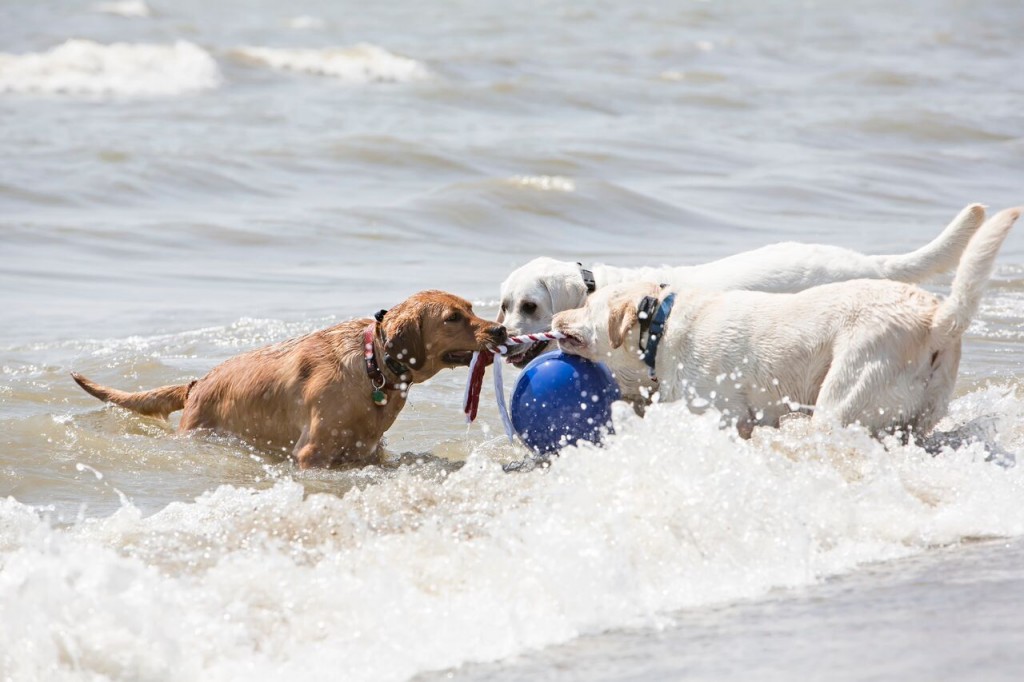 Harrington is an entrepreneur at heart, having his hand in many businesses. But according to Harrington, those business were “just about making a living.” This new invention — and business — was going to give him a chance to really live life.

Harrington was ready to make Tuggo Dog Toys a reality. He didn’t know the industry, didn’t have branding, and didn’t have pricing. But that didn’t stop him.

Launching at the 2014 Global Pet Expo, in spite of the “cut throat” environment and the lack of industry knowledge, Tuggo Dog Toys walked away with the “Becker’s Best Award” from Dr. Marty Becker and even secured a feature on the Today Show.

This feature lit the fire. Coming from nothing, no funding — their instant success at this show allowed them to start making sales and expand their line. But, how were they going to financially support this success?

Harrington was never interested in taking on venture capital. He wanted to own 100% of his company, always. But, Harrington knew he needed financing to take his company to the next level. He had his eyes set on SuperZoo, a tradeshow that would put his company in a position to meet some of the industry’s top retailers.

After no luck (or care) from the banks, Adam Harrington was out of options. He knew he had high demand for his unique product. Why couldn’t the banks see that? Unfortunately, no one wanted to give a guy in Mount Juliet, Tennessee, with just a plastic ball and a rope, a loan.

Harrington set out to find funding online. There was no other choice. And that’s what led him to Fundera.

“6 times a day I was getting calls from people saying ‘they’re the guy that funds everyone else.’ They were just brokers. It seemed like cut throat business. These calls made me nervous to even look online.” But when Harrington started researching and called Fundera, he was pleasantly surprised. It was the first time he “wasn’t being sold to. Fundera just simply explained how it worked. Everyone else was promising things they couldn’t deliver. Fundera focused on what they could do to help me.”  One of the things that stuck with Harrington most was when his loan expert, Tom, told him “I hope your business grows to a point where you don’t need to use Fundera anymore.” As Harrington remarks, “It’s like Fundera’s business model is about making my company successful, not just finding me a loan.”

But, Harrington did find a loan. And with that money, he was able to go to SuperZoo with everything he needed: a newly designed retail display, and a smaller ball size for toy dogs. 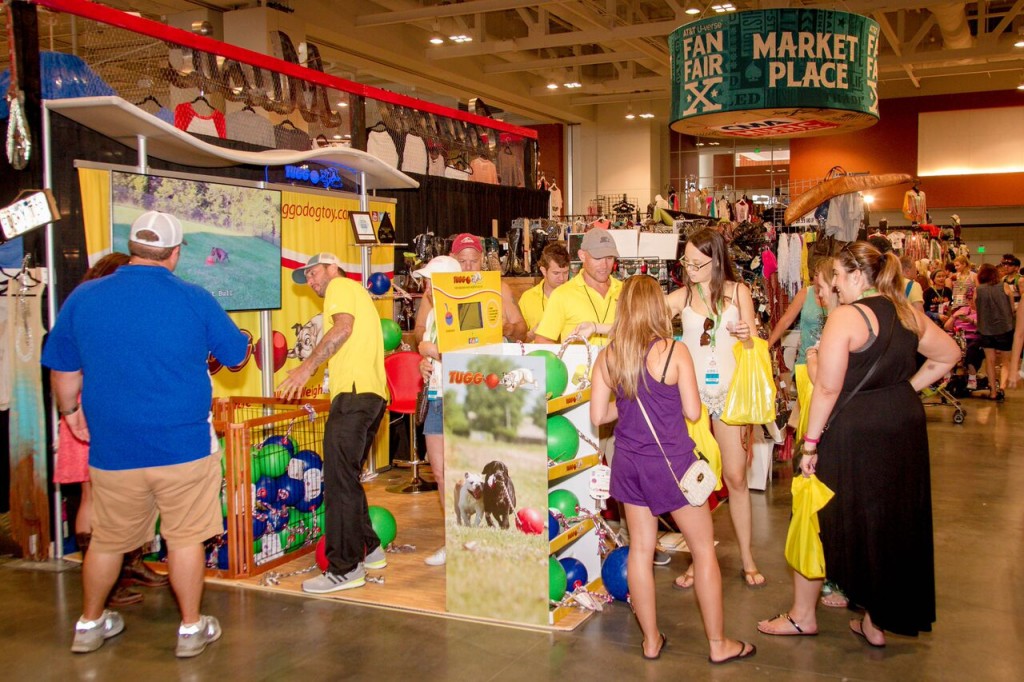 Big Deals with the Big Dogs

Taking that financing and investing it in SuperZoo might be one of the best decisions Harrington’s made to date. Why?

At SuperZoo, he was discovered by little known retailer (kidding), PetSmart. Tuggo’s presence at this show ended up winning them a contract with that very retailer. In fact, their decision to take on financing and invest in their business’s growth ended up winning them a contract with PetSmart. Even better? They know that all the supplies that come with having a big box contract is something they can take care of financially. Most suppliers know this to be true: you need strong cash flow if you want to take on a big box contract.

Tuggo Dog Toys is now at a point where, according to Harrington, they “are growing faster than we could have ever imagined — especially thanks to Fundera.”

Harrington is watching his brand expand before him. In fact, with the PetSmart contract won, bigger retailers are taking note. Tuggo Dog Toys is going to be on the shelves for Christmas this year at Dillards. Now Harrington asks, “If Dillards is in, why not Kroger?” He knows the best thing for his brand is to continue looking forward, asking tough questions, and setting high goals.

Tuggo faces a new challenge: embracing fast success. As Harrington says, “How do we keep this success going? How do we make sure we hire the right people? How quickly can we grow the brand and make sure we do it right?”

Harrington’s current plan is to continue perfecting the formula that has worked so well for him. Heading to trade shows, prioritizing the large ones, and making the best impression while there. But how does he add to the formula? “Where should I invest our money, which sales reps do I hire, what I accounts do I go after? These are all questions I’m looking forward to finding an answer to,” reveals Harrington.

No one would give this young entrepreneur, with his plastic ball and rope, a loan. But that didn’t stop him. Harrington’s tenacity led him to find Fundera — and find the financing that led to the biggest contract in his company’s history.

Tuggo Dog Toys is just a year old and already making a ripple in the pet toy industry. Where will they be in 5 years?

We can’t wait to find out.