Fixies and Mixtapes: How Solé Bicycles is Growing from a Bike Shop into a Lifestyle Business 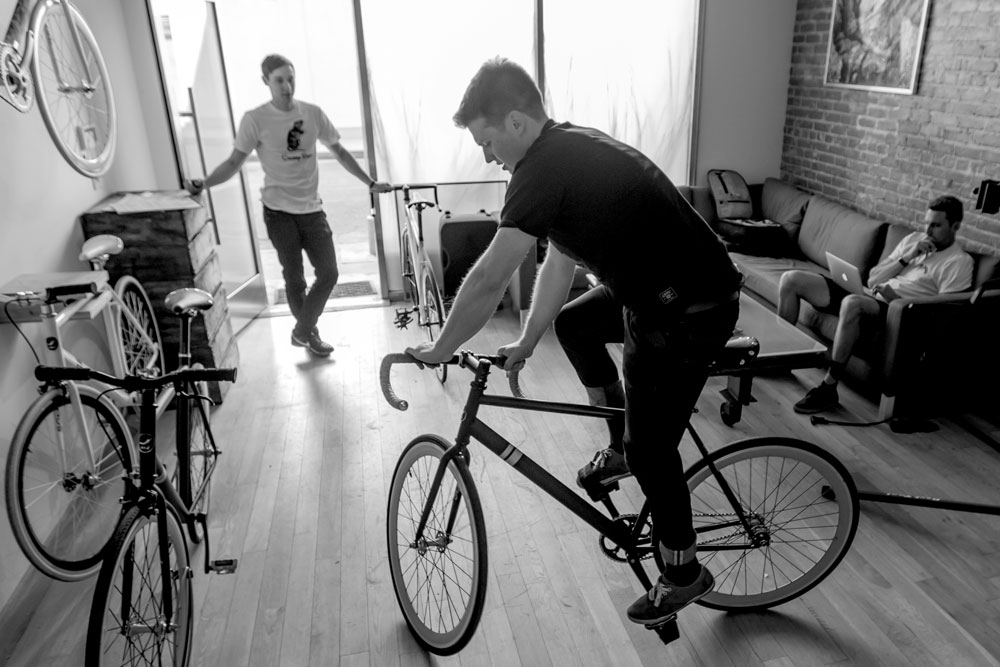 When Solé Bicycles launched in 2010, their mission was simple: make buying a well-made, good-looking and extremely functional urban bike fun and enjoyable — and affordable. Four years later, they’re a thriving lifestyle upstart who happens to sell bikes (and they’ve been profitable since day one). Here’s how they got there.

It all started the year before, when Brian Ruben, one of the co-founders of Solé Bicycles, was a senior at the University of Southern California. He’d begun to notice these sleek, bright and simple bikes around campus. After asking around, he learned these were fixed-gear bikes (called such because they lack a freewheel; the pedal and the rear wheel are directly connected, meaning you have to be constantly pedaling — no coasting). Fixies have long been a favorite of urban cyclists (and bike messengers), primarily for their simple setup — fewer moving parts means fewer things to maintain and fewer parts to add weight —which makes them great for students, too.

Brian was interested in getting a bike for himself, but there were two problems:  fixies are usually expensive — upwards of $1,000, which is astronomical for a college budget — and most had been built by their owners from scratch. There really wasn’t a way for him to get a good looking fixie off the street for himself without dropping big money.

He knew there had to be a better path to getting such well-made bikes to the mass market in an affordable way.

Soon after, Ruben, now 27 years old, was connected with long-time friends Jimmy Standley, now 23, and Ben Petraglia, 24, both students at Chapman University in Orange County, through mutual friends who knew they were thinking about the same problem. None of them had ever run a company — or built a bike — but that was beside the fact. They saw a hugely underserved space in this niche market and needed to go after it. Solé Bicycles was born.

That year, the guys raised $10,000 in funding from friends and family — the only outside funding they’ve ever raised — which was enough to manufacture and ship their first 150 bikes. Next up was a flash sale with Gilt City, which sold out the 1,000 bike order in less than a month. They then began selling wholesale from their Santa Monica-based office to bike stores around the country.

The company has been profitable since day one, generating more than $1.5 million in revenue in 2013, which is more than 100% growth from 2012. Despite that, they were having issues growing like they needed to.

Specifically, they had a major problems with inventory ordering. Continuously providing new products requires continuous cash flow, but the nature of their business means big gaps of time between when they need to purchase parts and when they get paid.

“It takes about three months between when an order is placed and when we get paid for it, and we’re moving thousands of units a month,” explains Ruben. “By having to order large quantities of bikes at once, it eats up a ton of our free cash and forces us to be even more bootstrapped with other areas of the company until we start recouping that money from the sale of the bikes. You run into cash-flow issues.”

To solve this, they began looking into different bike shop financing solutions.

Working with a traditional bank was unappealing — it would have taken months (at least 90 days) for a small business loan to come through, and every day counts.

After researching their options, Solé ended up securing a term loan for $75,000 through Fundera. Within 10 days, their money was in the bank.

“We were fully funded in less than two weeks from initial conversations. This was great for us as a small business, especially when other banks/loans have upwards of 90 day lead times,” says Ruben. “This loan allow us to continue to grow and market new business without being hindered by cash tied-up in inventory.”

And the timing’s just right. Solé introduces new colors and styles every three months, and they just began offering a new model in addition to their single-speed and fixed-gear options: an upgraded version of a classic beach cruiser that’s more comfortable, stylish and functional.

“We found ourselves getting caught-up in the price war with our competitors, and the race to the bottom only meant our product was getting cheaper and less unique,” explains Ruben. “By going direct to the consumer, we can really market our lifestyle and sell a product we are proud of without worrying about competing head to head with price. Our selling point went from solely price point [none of the bikes are more than $400] to price point plus product quality plus branding.”

And that branding component is becoming more and more of a priority. Solé wanted to do more than improve the bike-buying process. They want to become the become the first bicycle company that crosses over into the lifestyle market — fashion, art, music and culture — and fully support their customer’s interests on and off the bike. They’re not just selling bikes — they’re creating a community.

A look at Solé s website and social media profiles (they’re on Facebook, and are @SoleBicycles on Twitter and Instagram) brings into focus just what this means. They’ll often host product giveaways or allow their customers to pick next season’s new colors. The “Lifestyle” section on SoleBicycles.com features things like a series of #bikeporn-like images from local artists who have tricked-out Solé bikes, short films from their community, a series of “Fixtapes” mixed by local DJs that are available to stream free on Soundcloud, listings for IRL events and more.

This has helped Solé attract new customers while keeping their existing ones happy and coming back for more.

“We’re always looking for ways to reward our customers and create community outreach,” explains Ruben. “One of our favorite things to do is to partner-up with like-minded brands that share our — and our customers’ — values.”

Finding ways to bond with your customers and to support your mutual interests — like musical tastes, for example — is a great way to keep interacting with customers in an organic way that’s less “give me your money!” and more “let’s share cool ideas”.  And for Solé, that component of community is what keeps them in business.

“The best way to run a lifestyle company is to actually live the lifestyle,” says Standley. “At Solé, we love sharing our interests and passions beyond bicycles, and by creating a hub of content for our fans, our brand is able to grow and attract consumers outside the traditional bicycle market.”