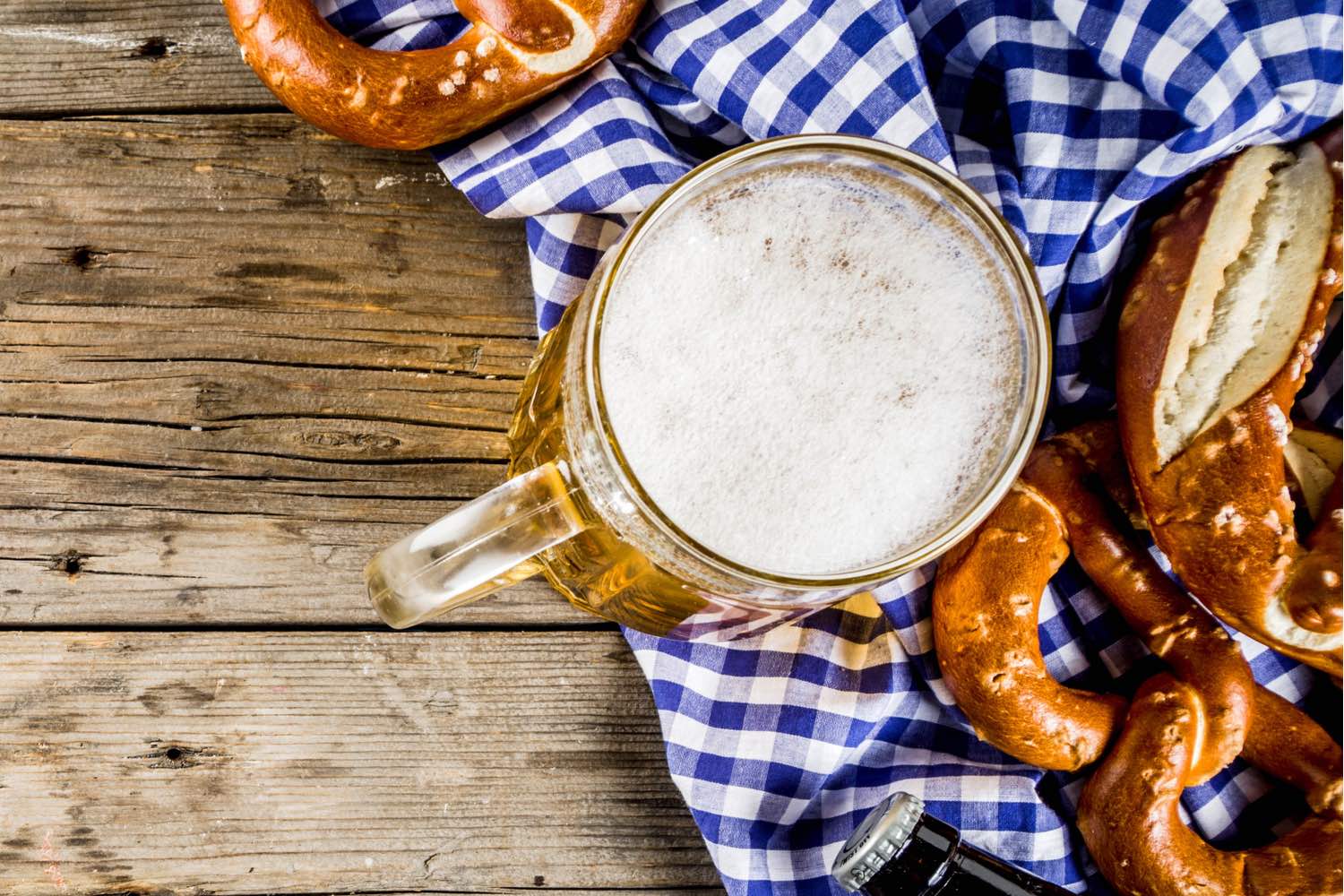 “We’re trying to build a brand for people who want to kick back with a beer, relax, enjoy the moment, and connect with others,” says Yochum of his family-run pretzel company. “So we make snacks that are easy to eat, yet unique enough that you’ll want to share them with others.”

This approach has proven successful, as Boardwalk Food Company’s pretzels are now available for purchase in 26  states. Here’s how Kim and Andy were able to take their bar snack idea and turn it into a national business. 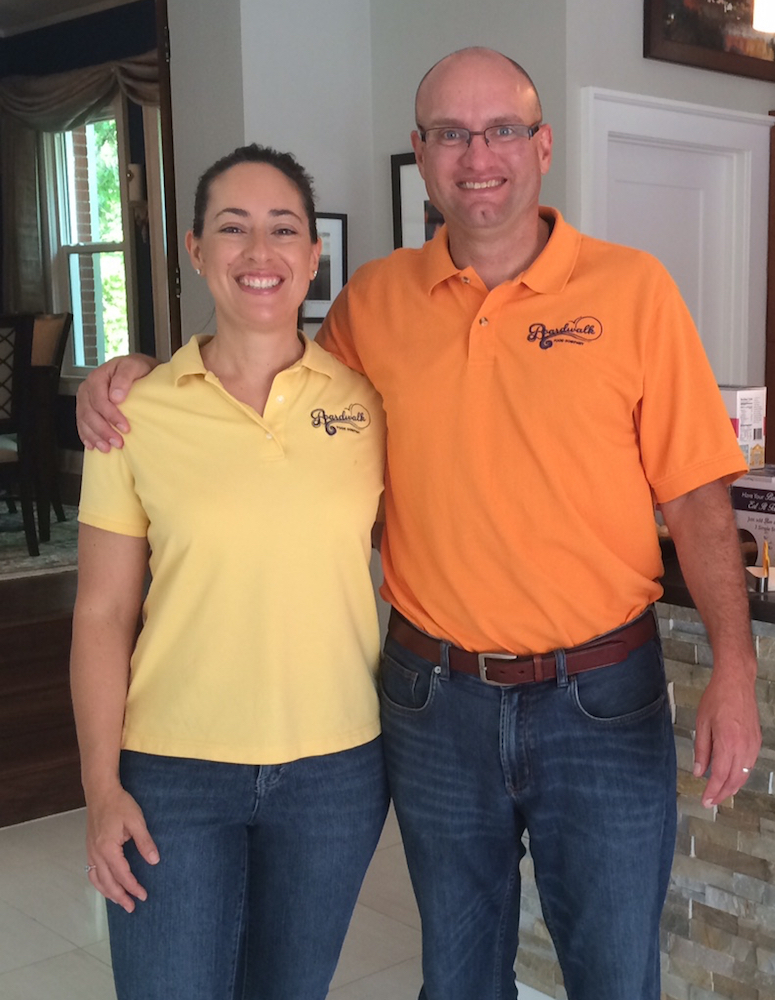 Searching for a Culture Change

By 2014, the corporate world had begun to wear Andy down. He had spent a long career in sales—first for a large printing and graphics company, then for a manufacturer of insulated drinkware products. After work and on the weekends, Andy and Kim liked to check out the new breweries that had been popping up around where they lived in Sarasota, Florida.

“This was when the whole craft brewery thing was really starting to take off,” Andy says. “I liked to go in and sample all the different flavors. But what I really liked was the relaxed and friendly environment.”

While hanging out in a brewery one day, Andy happened to notice two brewers collaborating on a new flavor.

“I asked, ‘What gives? Why work with a competitor?’” Andy recalls. “They told me they’re all in the same boat. One day one of them will be on tap. The next day the other would be on tap. There was plenty to go around.”

Coming from the corporate world, this response surprised Andy.

“I spent my whole professional life looking over both shoulders because people were always trying to screw me over,” Andy says. “I realized right then that I wanted to be part of this brewing culture where there was none of that nastiness.”

Andy began to contemplate ways he could enter the brewing market. He always felt pretzels paired well with beer, but wasn’t sure how he’d be able to compete with major pretzel makers like Snyder’s and Lay’s. He needed a niche market, and after talking to local brewers, he found one—pretzels made with beer.

Soon after that he set up an LLC, and Boardwalk Food Company was born. 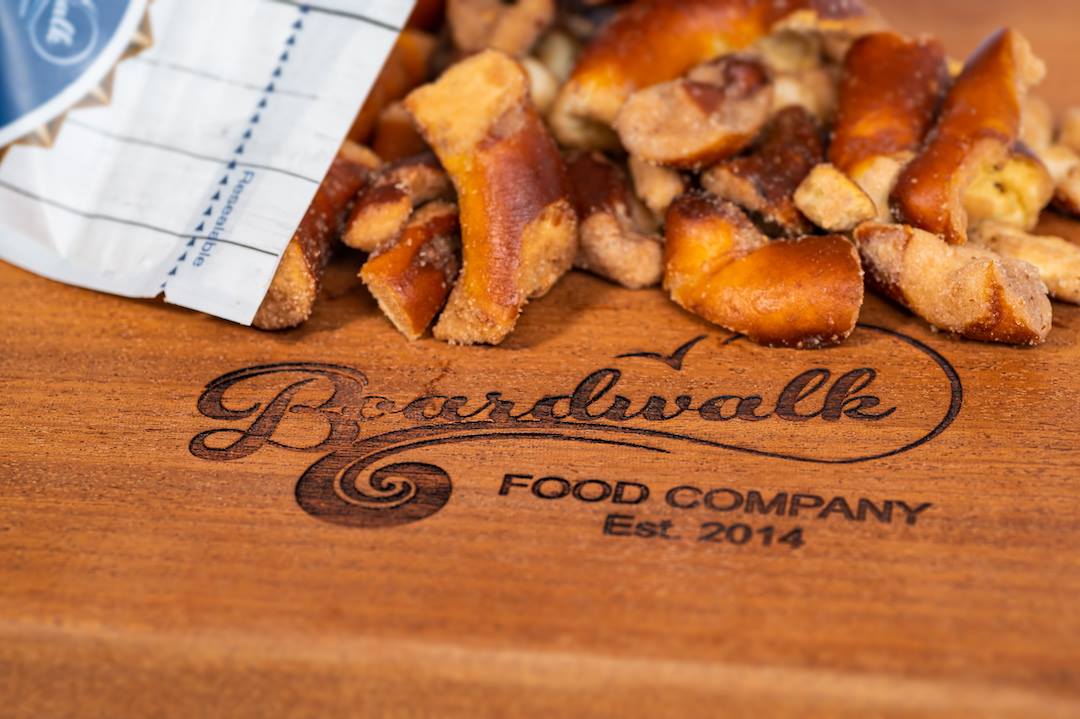 Andy is a skilled communicator. In college, he majored in communications, with a focus on persuasion.

“A friend of my father’s once told me that you can learn anything, but if you’re a good communicator, you can control the world,” Andy says.

This may be true when it comes to sales, but less so when it comes to making pretzels. Fortunately for Andy, Kim studied food science in college. So Andy told her his vision, and she went about developing the recipe. After several months of work, which included raising money from friends and family and opening a few business credit cards, Kim and Andy had their product—a take-home pretzel mix that you can bake with the beer of your choosing.

“It was like a pancake mix, except for soft pretzels,” Andy says. “It was designed to be a gift for beer lovers.”

Andy targeted local gift shops, and the product initially sold well. But after a while, Andy realized a concerning trend—people would buy his product once, but they wouldn’t buy it a second time.

“People looked at it like a gimmicky thing,” Andy says. “The truth is, it was a pain in the butt to make, so people wouldn’t want to go through that ordeal more than once.”

Andy and Kim knew they needed to pivot, so they dug into the market research and learned a few things. As it turned out, millennials are the most active consumers of craft beer and specialty foods—but are not particularly fond of baking.

“So our product was targeted at one demographic, even though it appealed to a different demographic,” Andy says. “We needed to choose one market and stick to it.”

Andy and Kim saw more potential in targeting millennials. Therefore, they needed a product that required no preparation. They went about looking for a commercial bakery that could make premade pretzels, but couldn’t find a vendor that was willing to pour beer into a pretzel machine.

“So we needed to pivot again, this time with our product,” Andy says. “We started coming up with the idea that, if our product couldn’t be made with beer, it could at least taste like beer.”

Back in the kitchen of their home, Kim went about creating seasoning blends that would mimic the taste of different beers. Andy then hired a spice company to replicate the recipe, and a contract packager to mix the spices and the pretzels and package them for distribution.

It took a year and a considerable amount of debt, but Andy and Kim finally felt like they had the right product. 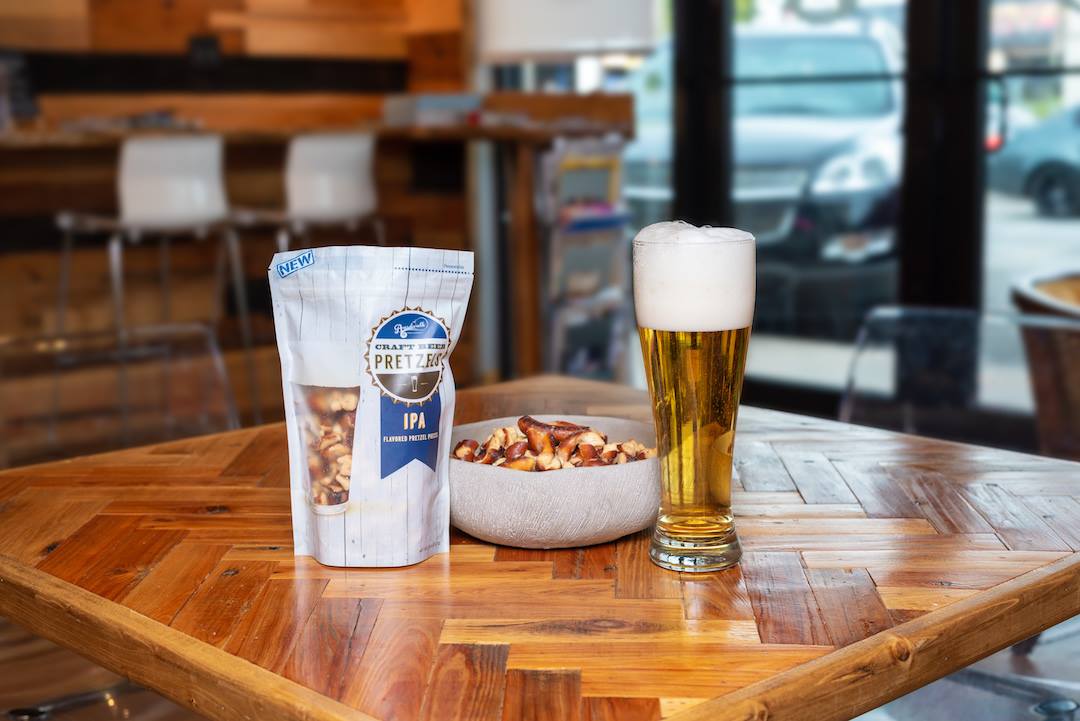 Andy targets small specialty food stores, beer and wine stores, gift stores, and breweries to sell his product, noting that it’s been beneficial to work with other small businesses.

“When you work with a large businesses you are a commodity and treated as such,” Andy says. “When you deal with other small businesses, they’re willing to work with you to help you get what you need because they understand.”

Andy’s strategy is to start by putting a small amount of his product in each store that agrees to work with him. That way, he isn’t producing a bunch of extra product without a guarantee there is a market for it.

“After what I learned with the mixes I’ve been a bit more cautious about how I’ve rolled these out,” Andy says. “Rather than blasting them out there, I’m selling a few, getting some feedback, then selling a few more.”

This strategy has Boardwalk Food Company in over 1,000 stores across the Southeast, East Coast, and Midwest. In recent months, Andy has begun contracting with a network of brokers and distributors to help get his pretzels in stores across all 50 states.

But before expanding, Andy had one last piece of important business to take care of. 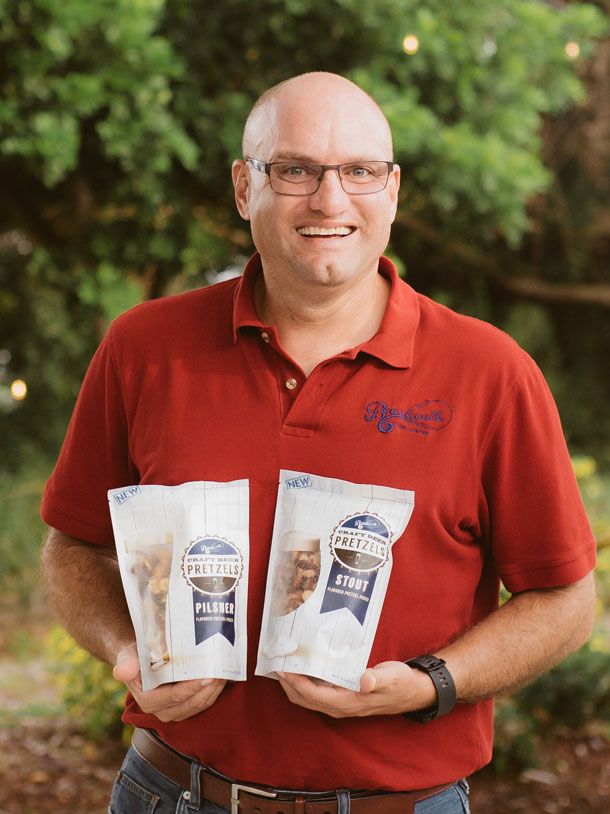 Andy likes to refer to the debt he and Kim raised starting Boardwalk Food Company as their “tuition money.” Once they started seeing success with their current product line, they knew it was time to pay off some of that tuition.

So Andy went to Google and typed in: “I need money for my business,” and found Fundera as one of the top results. He filled out an application online and was connected with Fundera loan specialist Brian Book shortly thereafter.

Brian and Andy worked together to consolidate Andy’s debt into one predictable, payable $30,000 term loan with OnDeck Capital. Andy also used some of the financing to pay for inventory.

“Brian was fantastic, and made the whole process very easy,” Andy says. “At no point was I confused with what was going on, and my wife and I were very pleased with the result.” 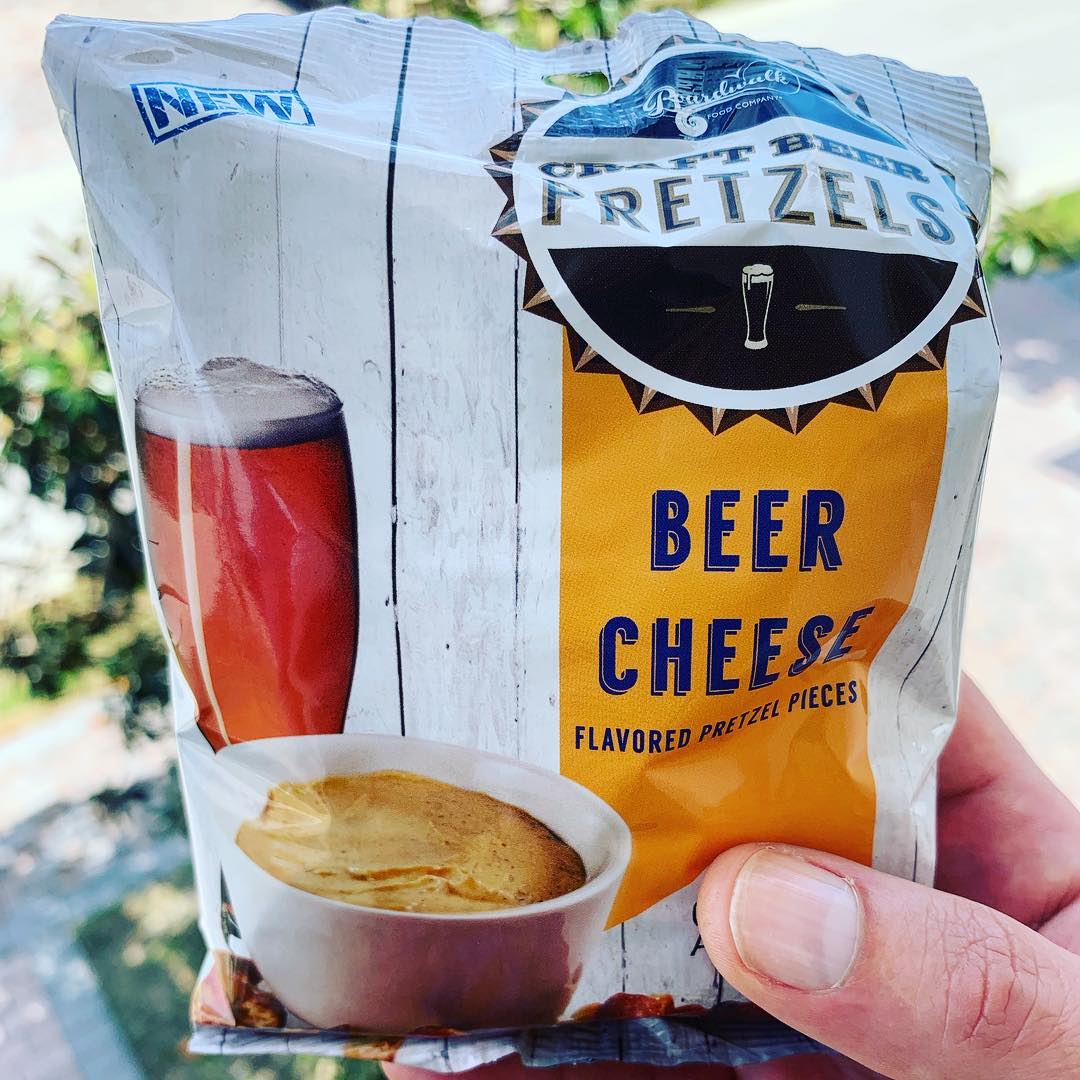 Looking to the Future

With their finances under control, Andy and Kim are hopeful about the future of their business. In the next six months, Boardwalk Food Company plans to open up an office and hire marketers to boost their brand visibility.

Up until this point, Andy and Kim have been running the business by themselves—with help from a network of third-party vendors.

“We want distributors to be coming to us, instead of going out and finding them,” Andy says. “We need marketing for that.”

Boardwalk Food Company will also be unveiling two new pretzel flavors in the new year: Michelada (a spicy tomato and horseradish mix) and Ranch. Over the long term, Andy and Kim hope to expand to different snack products that stick to the theme of being easy to eat and shareable.

“We want to make snacks that bring people together, and that you can enjoy with a beer,” Andy says.

As Andy reflects on the past five years, he says he learned a lot of lessons, but none more important than patience.

“When I started this business I wanted to go from zero to one million overnight and you can’t,” he says. “You need to move deliberately and test and refine your product. It’s really about slowing down in order to speed up, because nothing is going to go the way you think it’s going to go, and you have to have the patience to deal with change without losing your mind.”

Andy named his business as an homage to his childhood. Growing up in Philadelphia, his family would often vacation near the boardwalk along the Jersey Shore.

“To me, the boardwalk was always a place of carefree fun, so I thought it was a good name for my business,” Andy says.

Andy will be the first to admit that running Boardwalk Food Company is no vacation. Even still, living out his lifelong dream of business ownership is as happy as he’s felt since those early days playing on the boardwalk.