“American Ninja Warrior” Inspired This Veteran to Open His Own Gym 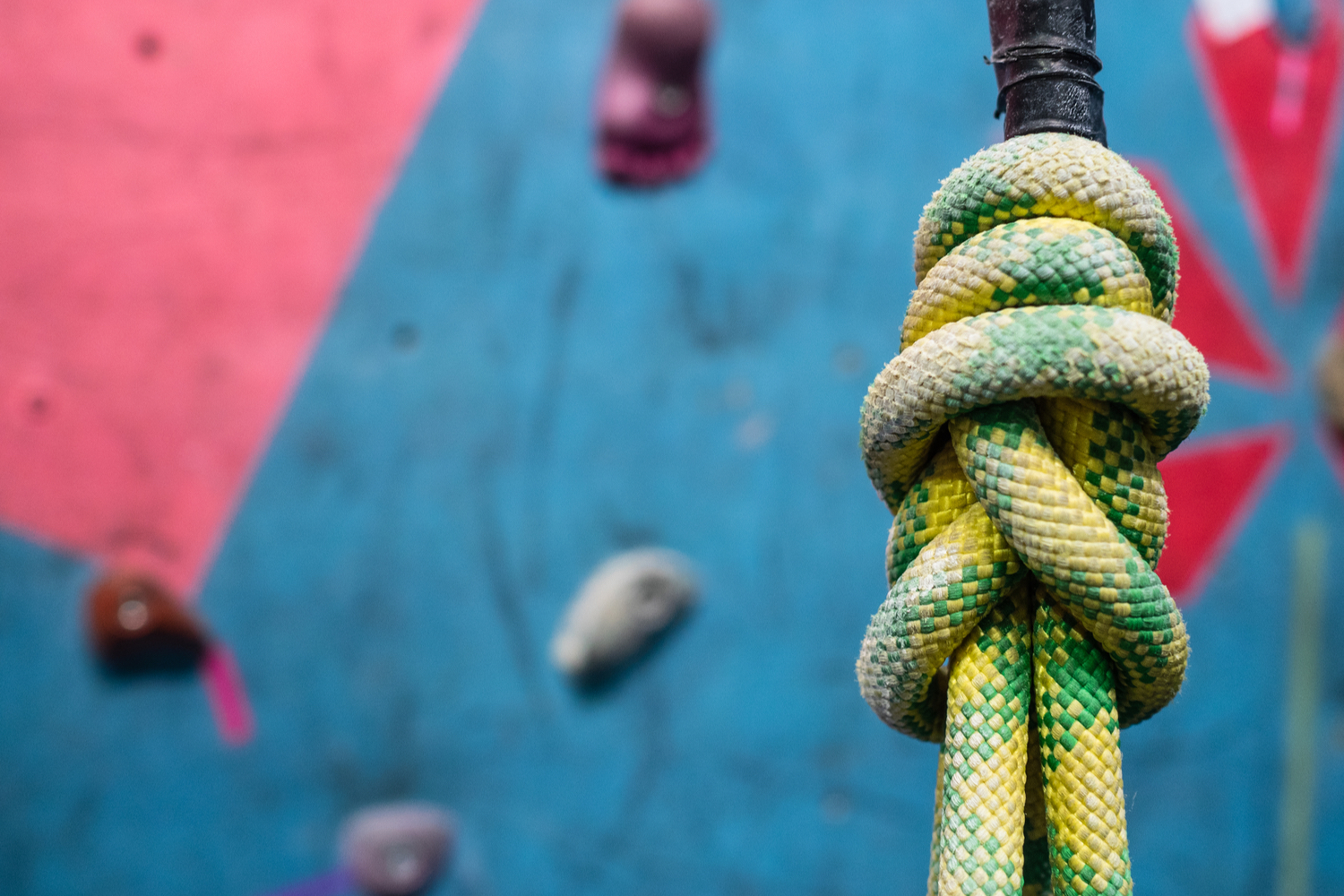 At a large facility in the farmlands outside Dayton, Ohio, people are exercising in a way you have probably never seen before. Visit during normal business hours and you might see someone balancing themselves atop a large wooden spool as it rolls across the floor, or running up the side of a 14-foot high curved wall (known as a “warped wall”).

This is what an average day looks like at Ninjobstacles, a gym offering the exercise techniques popularized by the hit NBC television show “American Ninja Warrior.” Here’s the story of how the gym’s owner, Michael Waye, went from watching “American Ninja Warrior” to training the athletes who compete on the show.

A New Way to Work Out

Waye believes fitness is an essential part of life.

But if you told Waye 20 years ago that he would one day be operating a gym in Ohio, he probably wouldn’t believe you. The Portland, Maine, native grew up with a passion for film and theater—and studied both at the University of Southern Maine. After college he joined the Air Force Reserves. Then he moved to Minnesota to help launch a theater company called Action Entertainment. As a member of the company, Waye acted, wrote, directed, and even did stunt fighting and choreography.

Eventually the Air Force came calling for him and he relocated to Wright-Patterson Air Force Base in Greene County, Ohio. He did a tour of duty in Kyrgyzstan, then returned and worked warehouse jobs in the area. After a few years spent lifting and transporting heavy boxes, Waye decided to use his GI Bill to go back to school and learn how to start his own business.

A year later he had a graduate certificate in entrepreneurship from Keller University of Management. He had plans to start a coffee shop, but came up with a new idea while watching “American Ninja Warrior.”

“I had just retired from the military, meaning for the first time in my adult life I didn’t have to do military-style workouts,” Waye says. “Now I could do what I wanted to do for exercise, and I thought it would be fun to try doing these obstacle courses that you see on the show.”

When he saw there were no gyms in the greater Dayton area that offered this type of workout, he decided to alter his business plan. With help from his wife, Leslie, he conducted some market research and found that there were a large number of people in the area that would welcome this style of gym. So in 2017 he formed an LLC under the name “Ninjobstacles” (an amalgamation of the word “ninja” and “obstacles”) and started seeking financing to help bring his ninja warrior gym idea to life. 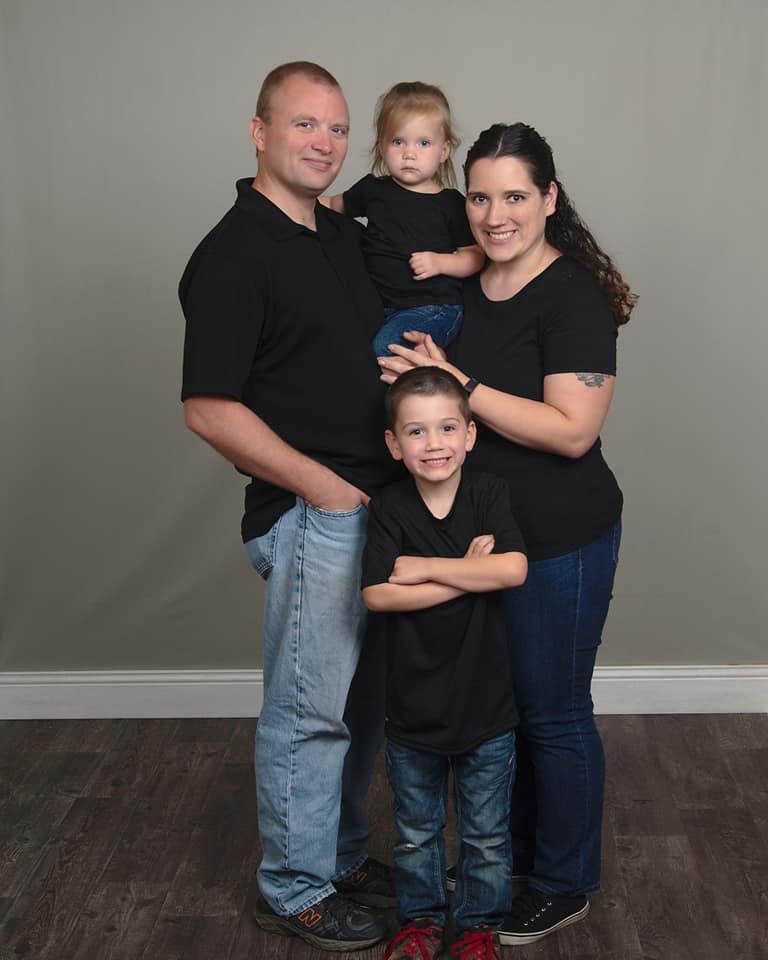 To launch Ninjobstacles the way he wanted, Waye estimated that he needed about $100,000. To get that financing, Waye says he took out several “high-fee” business loans and maxed out “a few” business credit cards.

“It’s too bad I didn’t start with Fundera,” Waye says.

The money went toward renting a 20,000-square-foot facility with 20-foot-high ceilings in Centerville, Ohio—a suburb of Dayton. Because the building was already zoned as a sporting facility, Waye says he didn’t need to take out any permits or apply for any licenses.

He used the rest of the money to buy various ninja warrior equipment. Among the obstacles Waye purchased were the aforementioned warped wall (retail price: $5,000), a salmon ladder (climbing obstacle), rumbling dice (a metal box users hang from while simultaneously rolling it across a track), cargo nets (climbing obstacle), and unstable bridges (“It’s like walking across a swing,” Waye says).

Many of the ninja warrior obstacles were purchased from vendors, buy Waye says he and Leslie also dreamed up several of their own obstacles, and purchased the parts they needed from Home Depot. While there is a lot of variety in the obstacles Waye purchased, he says they all have one thing in common:

“Ninja warrior obstacles are designed to work out all parts of your body. To get through our course takes strength, speed, and balance, and you’ll feel it in your upper body, core, and legs.”

Overall Waye ended up purchasing 30 different obstacles. He arranged his obstacles around his gym to mimic the type of courses seen on “American Ninja Warrior.” On November 17, 2018, he opened for business. 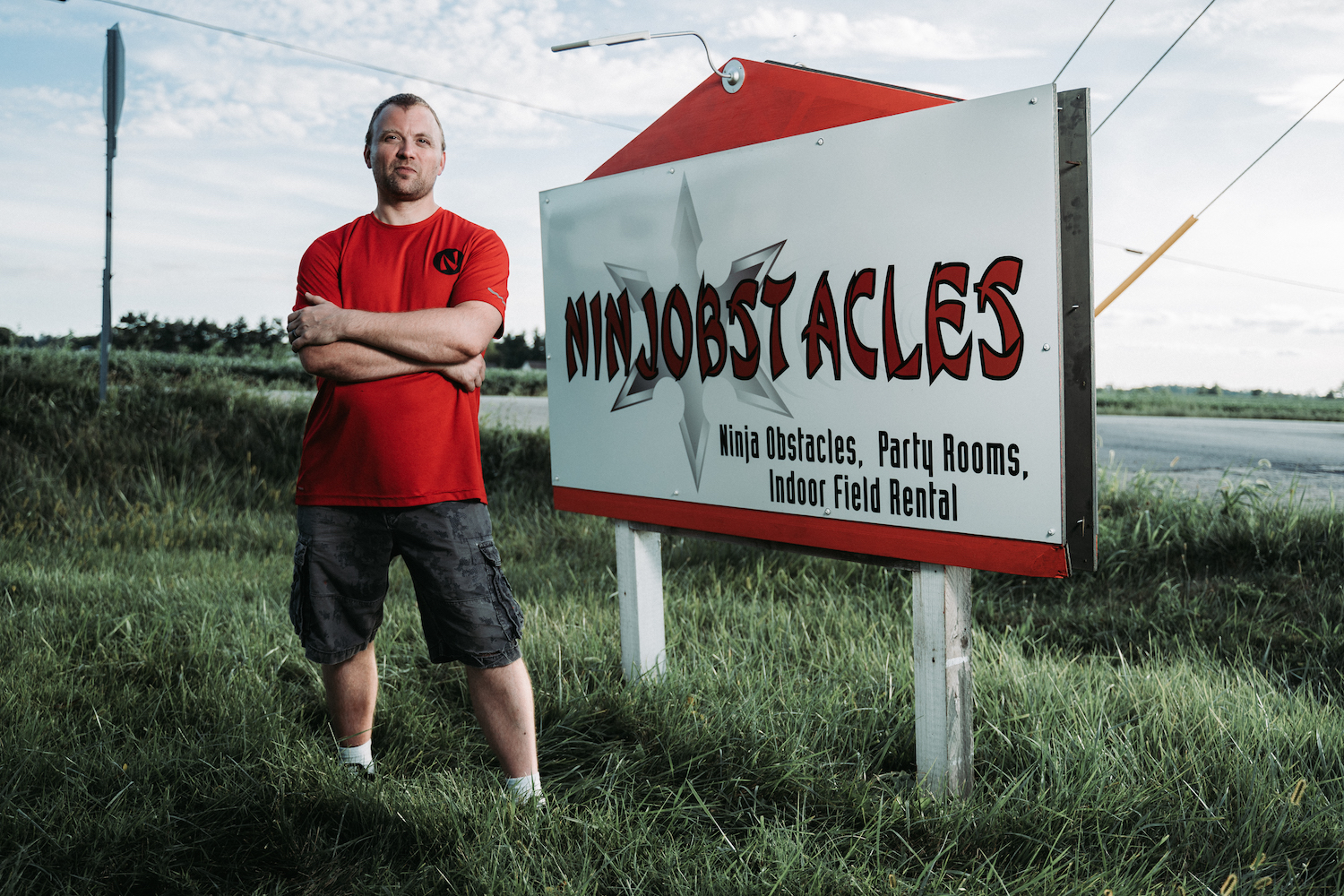 Ninjobstacles charges $100 per month for a membership, but kids 12 and under can become members for $75 per month.[1] Ninjobstacles also offers “drop-in” pricing: It’s $20 to work out for up to two hours, and $25 to work out for four hours—there are discounts for children 12 and under (senior citizens and kids 3 and under get in free). Once you sign a waiver, you are free to try out the full obstacle course or work out on individual obstacles.

“A lot of our customers find the regular gym scene boring,” Waye says. “For them, doing ninja warrior is like being on an adult playground. You are still getting a full body workout but you are also playing. This makes it easier to stick with your exercise routine.”

Ninjobstacles offers classes for children and adults (ranging from $10-$16), as well as one-to-one training ($40/hour). There are a wide variety of classes, including ninja strength and conditioning, Zumba, parkour, and speed and agility. Waye personally teaches a “Ninjtoddlers” class for kids. One-to-one sessions focus on using ninja warrior obstacles to build strength, increase endurance, and lose weight.

Ninjobstacles employs three certified trainers. One of the trainers, Noah Hartsough, is angling to be on “American Ninja Warrior” next season. There are also a handful of “Ninja Warrior” contestants who have visited Ninjobstacles, including Jerome Whitaker and Kyle Schulze.

In terms of clientele, Waye says Ninjobstacles gets children and adults of all shapes and sizes. The most successful are folks who have experience rock climbing or doing gymnastics.

“They are lean and agile,” Waye says. “We have seen big muscular guys do well, but if you have the body of a football linebacker, you’ll probably struggle.”

Waye generates additional sources of revenue by renting out his facility for parties and events. 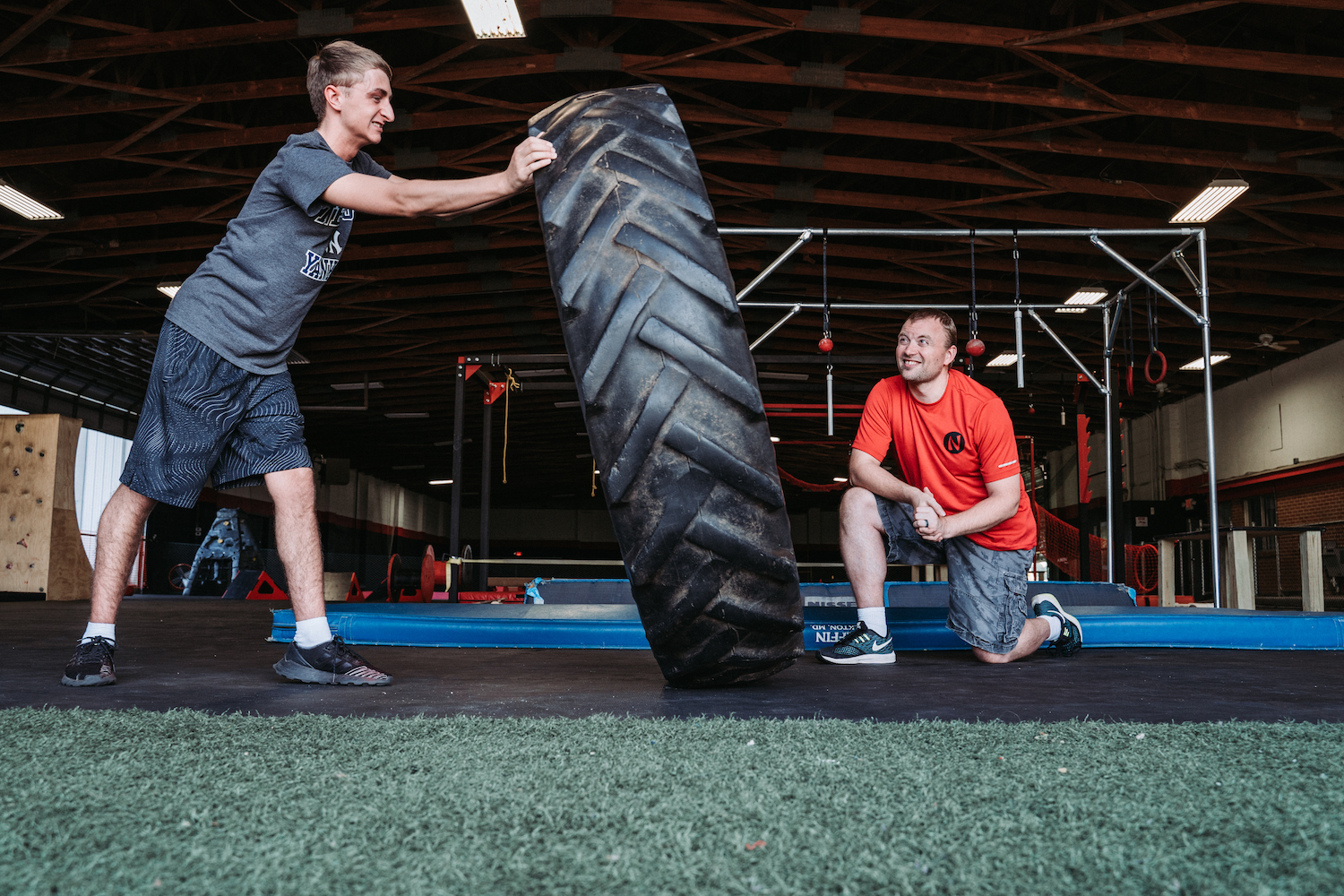 Getting Help Through a Seasonal Downturn

The summer months tend to be slow for the gym business. But as a new business, Waye couldn’t afford a downturn. So to help float his business along, Waye began researching business loans online.

“I wasn’t really happy with the last lender I worked with because they charged such high fees,” Waye says. “I figured there had to be something better out there.”

He provided some basic business information through Fundera’s online portal, and was quickly connected with loan specialist Patrick McCarthy. Working with McCarthy, Waye got a $40,000 two-year term loan from Fundation.

“I was very hesitant to take out a new loan because I wasn’t sure I wanted more debt, but Patrick was patient with me and told me everything I needed to know,” Waye says. “I never felt pressured, and I was able to make a decision that was in my business’s best interest.” 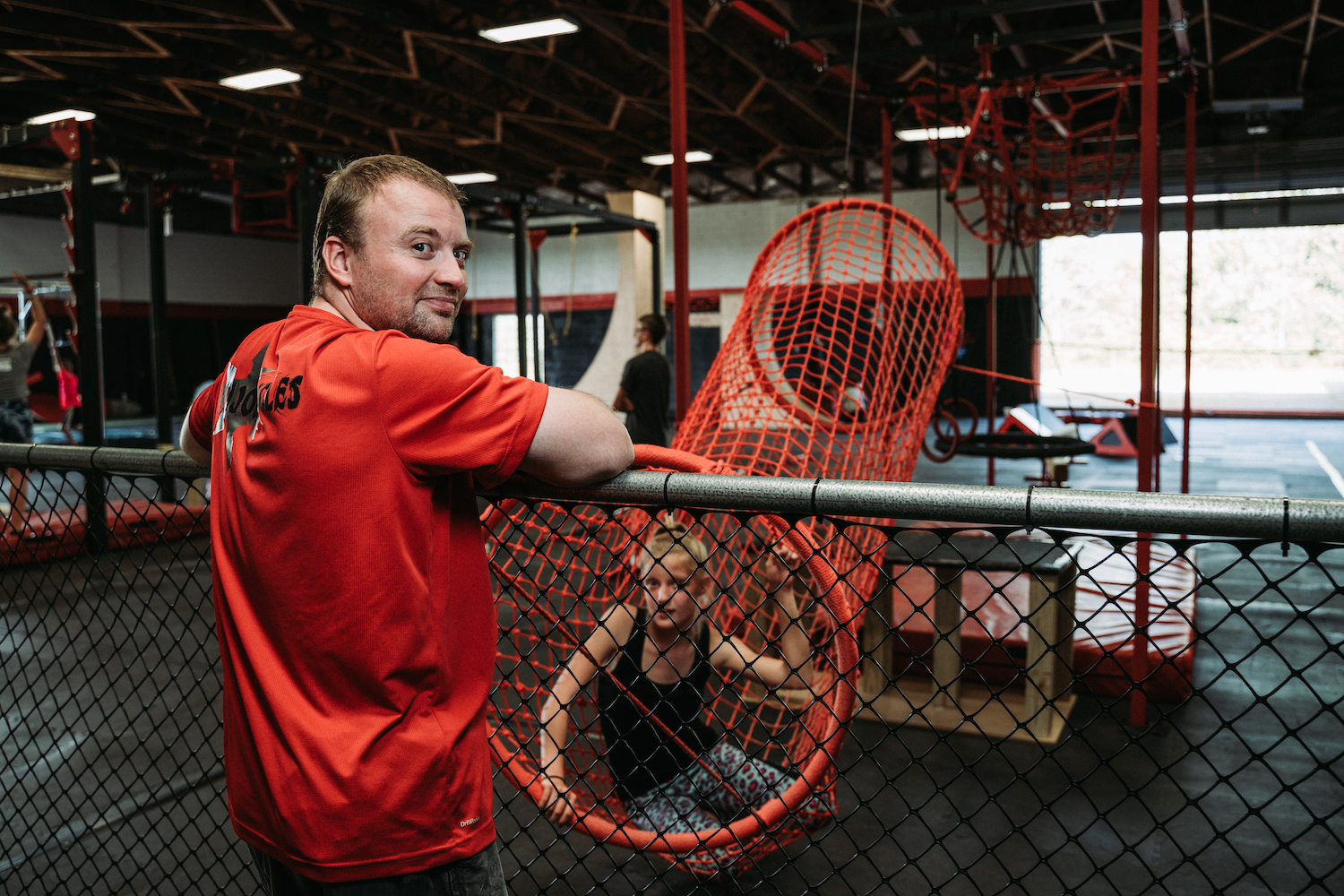 To date, Ninjobstacles has hosted over 4,000 customers interested in trying out this new exercise style. Waye is bullish on the future of ninja warrior exercises, given that more and more gyms keep popping up, and “American Ninja Warrior” is currently airing its 11th season.

“It’s just plain fun,” Waye says. “You still get your workout but you do it while learning new skills and trying something different.”

To keep his business going, Waye often works from sunup till sundown. In the mornings he handles administrative tasks and cares for his two children (his wife works full time as a nurse at the local VA hospital). In the afternoons (when Ninjobstacles opens) he works the front desk and manages the facility. After Ninjobstacles closes at 9 p.m., he’s back to doing admin work until bedtime.

However, Waye is not complaining. He loves operating his business and has ambitions to expand. Once his customer base stabilizes, he want to purchase some land outside of his facility where he will build an obstacle racing course (OCR). OCR is an offshoot of ninja warrior where contestants compete in 5K or 10K races with obstacles spread throughout.

“The goal is to have a little ninja compound,” Waye says. “That way our business is year round.”

For those skeptical of ninja warrior workouts, Waye has a pitch:

“I went to the gym for years and it gets boring lifting big weights and then putting them back down. If you feel the same way, or if you are just looking for something to supplement the gym with, try ninja warrior. You’ll get a full body workout and you’ll have a  great time doing it.”