If you live in Tulsa, Oklahoma, look up in the sky at any given time and you might spot Chuck Dixon. As the owner and head pilot for Tulsa County Helicopters, Dixon has made it his business to show you the Tulsa area like you’ve never seen it before.

“I’ve been up in the air millions of times but it never gets old for me,” says Dixon, a Kansas native who has lived in Oklahoma most of his life. “Especially because I get to see the reactions of our customers every day. For them it’s a really exciting experience.”

For Dixon to be able to make it in the complicated and expensive world of commercial aviation, it took years of hard work, help from friends, and more than a few lucky breaks. Here’s how he took an enthusiasm for flying and turned it into one of the top-rated helicopter tourism companies in the state of Oklahoma.[1]

Flying From an Early Age

Dixon’s first exposure to aviation came with the Cessna CH-1 Skyhook. When the CH-1 Skyhook debuted in 1956, it set the world record for helicopter altitude. However, it never became a commercial success, and in 1962 Cessna decided to buy back all CH-1 Skyhooks and have them destroyed. The man tasked with rounding up and destroying the helicopters was Dixon’s father.

“It was the ugliest helicopter you’ve ever seen, but I always wanted to fly it,” Dixon says. “Instead I got to watch my father spend all his time destroying these helicopters—and then I go on to become a helicopter pilot.”

The idea of flying stuck with Dixon as he grew up. As a teenager he started flying small fixed-wing airplanes. At age 20, he decided to try for his airplane pilot’s license. But then he abruptly quit before completing the requisite training. The problem? Flying airplanes bored him.

“With an airplane all you have to do is point it into the wind, give it gas, and it flies,” explains Dixon. “After you get it out you can kick back, smoke a cigarette, read a book, and do whatever you want. Flying a helicopter, on the other hand, is the ultimate multitasking experience—both hands and feet are involved at all times.”

Dixon drifted away from flying for a time and transitioned into another career that kept him high off the ground—working as an electrical lineman for a utility company in the Tulsa area. The idea of flying helicopters stuck with him, though, and in 2006, after he had saved a bit of money, he decided to take a crack at his helicopter pilot’s license.

“I heard an ad for a Tulsa helicopter school explaining that there was a shortage of helicopter pilots in the area because so many veterans were retiring,” says Dixon. “So I decided to give it a whirl.”

He laid out $70,000 in tuition, but before he could get his license, the school went bankrupt. He eventually finished out his training at another school in 2008, and became a licensed helicopter pilot. 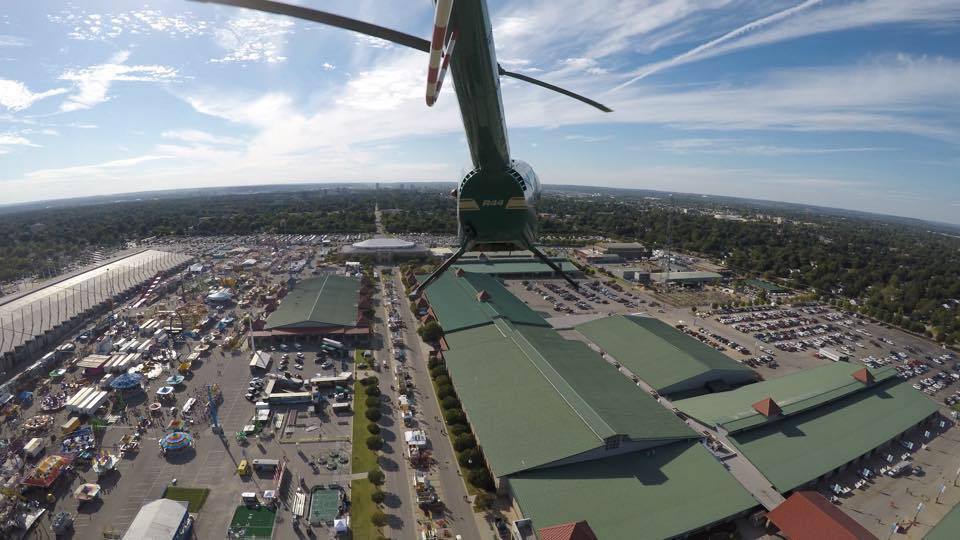 Dixon hoped his license would open up a bunch of new job opportunities, but he quickly learned that large commercial helicopter companies prefer candidates with many more years of flight experience. So Dixon decided that if he couldn’t find work, he was going to make work for himself. He began renting a helicopter from the school where he got his license and flying it to music festivals, county fairs, and other outdoor events. When he got there, he’d offer attendees five minute helicopter rides for $40 a pop.

“It was a great way to fly without having to pay for it because renting a helicopter is expensive,” Dixon says. “I also gained a lot of experience, one five-minute ride at a time.”

He eventually recruited his friend, fellow pilot Dustin Stone, and girlfriend, Becky Woodward, to assist him at events. Dixon and Stone would fly the helicopter, and Woodward would provide customer service and safety instructions.

In 2012 Dixon and Stone decided to take their weekend hustle to the next level by forming the partnership DNC Aviation (Stone left the business in 2016 to become a news channel helicopter pilot). Under DNC Aviation they formally launched their business—Tulsa County Helicopters. Dixon identified three sources of revenue for Tulsa County Helicopters: entertainment flights (like the ones they were doing at county fairs), flight lessons, and commercial flying.

But for the business to really “take off,” Dixon, Stone, and Woodward knew they needed to purchase their own helicopter. That’s how they found Bonnie Harmon, a local woman who was looking to sell a helicopter she had won in a divorce settlement. Dixon was able to strike an equipment financing deal with Harmon: He leased the helicopter from her until he could pay back the full $500,000 price tag on it. In 2014, DNC Aviation was able to pay off the helicopter in full—a Robinson R44 Raven 2.

Once they had unencumbered access to a helicopter of their own, Dixon, Stone and Woodward were able to take on a lot more events. They were also able to pick up commercial jobs inspecting power lines for Oklahoma Gas and Electric and performing emergency patrols after bad storms. Today, Tulsa County Helicopters operates out of a hangar at Richard L. Jones Airport on the outskirts of downtown Tulsa. Dixon still keeps his full-time job as an electrical lineman, but the business is doing so well he’s contemplating an early retirement. 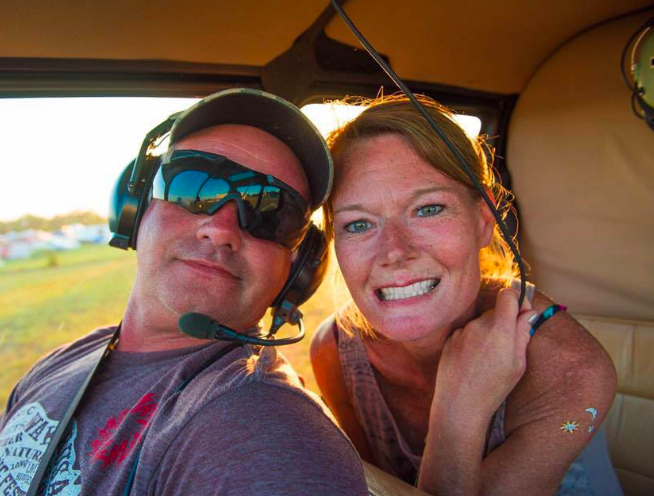 Tulsa County Helicopters offers its customers a menu of flight options. The most popular option is the “Tulsa Metro Tour.” For $265, Dixon will take up to three people on a 20-minute aerial tour of downtown Tulsa. On days when it’s not windy he’ll even fly in between buildings, and deposit passengers near an outdoor shopping area along the Arkansas River.

“The great thing about Tulsa is that we have a very interesting skyline in the downtown area with lots of art deco buildings,” says Dixon. “It looks beautiful during the day and night.”

This flight is especially popular during Christmas, when downtown Tulsa lights up with an elaborate Christmas display.

“The only way to get a good look at all the Christmas lights is from the air,” Dixon says. “We’ll probably gives tours to over 1,000 passengers in December alone.”

Other flight options include the “Exotic Car Ride & Helicopter Flight,” in which you get driven to the helicopter in an Aston Martin or Lamborghini, go on a 15-minute flight, and then get to pose for a photo shoot with the car and helicopter. The “Hard Rock Hotel & Casino Flight” gives a group of people a direct flight to the nearby Hard Rock Casino, where they can gamble for the evening and then be flown back to town. Tulsa County Helicopters also offers training flights, and even drone pilot lessons. Other options include flights to private dinners and proposal flights.

“We’ve also had two in-flight weddings,” Dixon says. “It’s always really special to be a part of that.”

“We’ve gotten to the point where the entertainment flights bring in enough money to support the business,” Dixon explains. “Now it’s just a matter of sustaining the flight school and commercial work we do.” 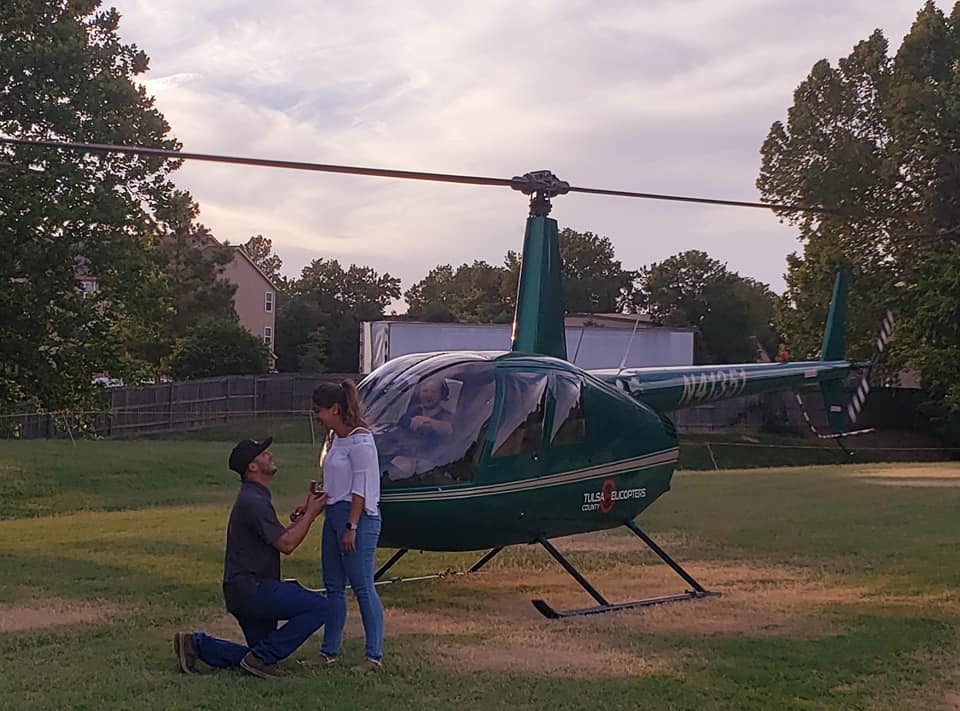 The Cost of Running a Helicopter Business

Operating a helicopter business comes with extremely high margins. Tulsa County Helicopters’ operating costs include gasoline for the helicopters, rent for the hangar, and the bi-annual renewal of the business’s Part 135 Certificate—a requirement by the Federal Aviation Administration (FAA) for commercial businesses. Another requirement is that Dixon and Askew belong to a drug test consortium, and submit to random drug tests at any time.

“Friends always ask for rides and say they’ll pay for the gas,” Dixon says. “But gasoline barely scratches the surface of our operating costs.”

Tulsa County Helicopters’ two biggest annual expenses are for insurance (Dixon says his 2018 insurance bill was $82,000) and maintenance of the helicopters. The FAA has strict requirements in terms of equipment for Part 135 operators. For the helicopter his business owns, Dixon has to submit to FAA inspections for every 50, 100, and 2,200 hours of flight time. During the 2,200-hour inspection, the FAA performs a total teardown and rebuild of all major components of the helicopter. This costs about $250,000.

“Basically for every hour we fly the helicopter we have to take $100 and stick it in a hole because we are going to have to spend that money rebuilding the helicopter,” Dixon says. 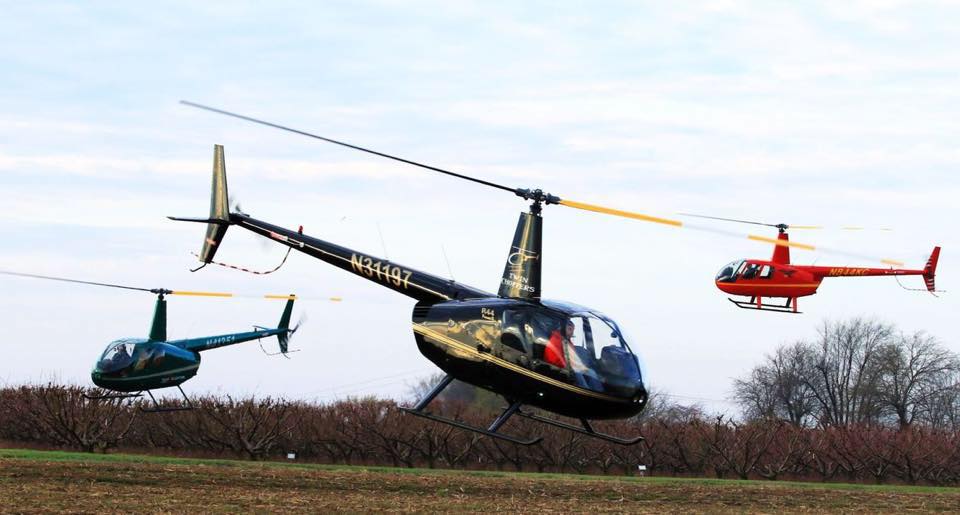 Financing for an Unanticipated Expense

The first 2,200-hour inspection on Tulsa County Helicopters’ Robinson R44 Raven 2 came this past winter. Dixon had put aside the $250,000 needed for the rebuild, but when he delivered the parts to the inspection site, he learned that the FAA charges a $38,000 deposit, which isn’t refunded until the inspection is complete—typically about two months later.

In order to keep his business afloat during the inspection period, he needed a bridge loan. So he went online and found Fundera. After submitting his information through the site, he worked with loan specialist Mohammed Rahman to secure multiple short-term loans with Kabbage, Fundbox, and PayPal for a total of $70,000.

“I got great terms and the process was very easy,” Dixon says. “Plus, the loan is a perfect fit for what we needed.”

Flying Into the Future

Dixon has plans to purchase a new helicopter to add to his company’s fleet by the end of the year. Within the next five years he plans to retire and work on Tulsa County Helicopters full time. He currently spends about three days flying each week and four days at the electric company.

“I basically have two full-time jobs, but I don’t really mind,” Dixon says.

He doesn’t mind because he loves to be up in the air—and he loves to take others up in the air. On most flights Woodward sits in the passenger seat next to him and engages with the customers. When the flight ends, most of the passengers say the same thing: “I never realized Tulsa looked this good until I saw it from the sky.”