Professional Communication: The Good, The Bad, and The Ugly 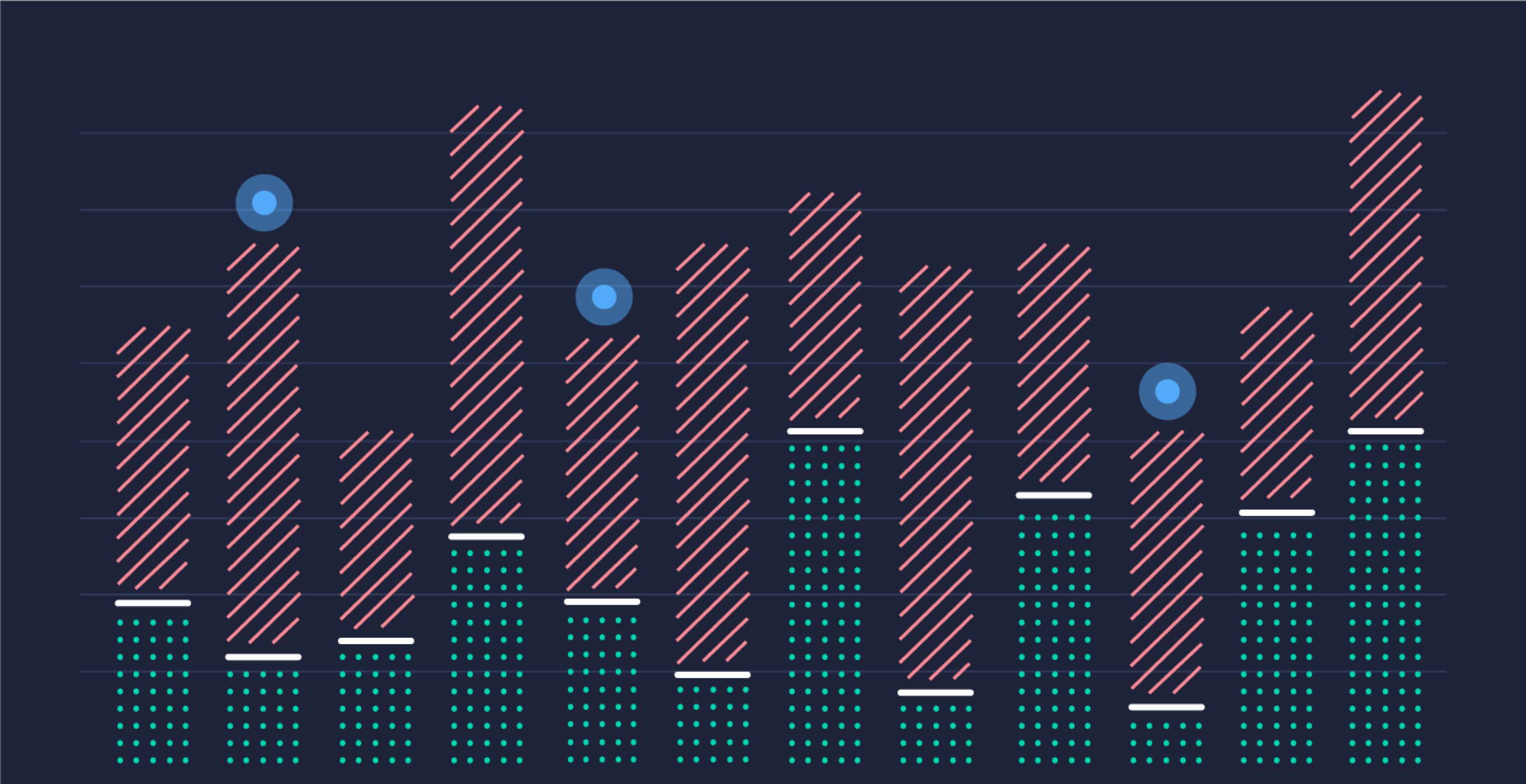 Workers send more than 108 billion emails every day. While this might seem like a lot of productive communication on the surface, the average employee spends nearly a quarter of their time sifting through their inbox and dealing with more than 100 emails they send and receive.[1]

Of these emails, some might leave you with that sinking feeling. A message from your boss who asks for a meeting but provides no details. An invitation to a barbecue from a co-worker with whom you’ve never had a real conversation. Or a dreaded message written in capital letters that you don’t know how to begin deciphering.

Email messages can sometimes get lost in translation, so we surveyed 1,000 Americans to get their take on how comfortable they are with email communication, their concern with misinterpretation, and the appropriateness of casual inserts like emojis and acronyms. Before you send out your next LOL or J/K, keep reading to learn more about crossing the line at work in the digital age. 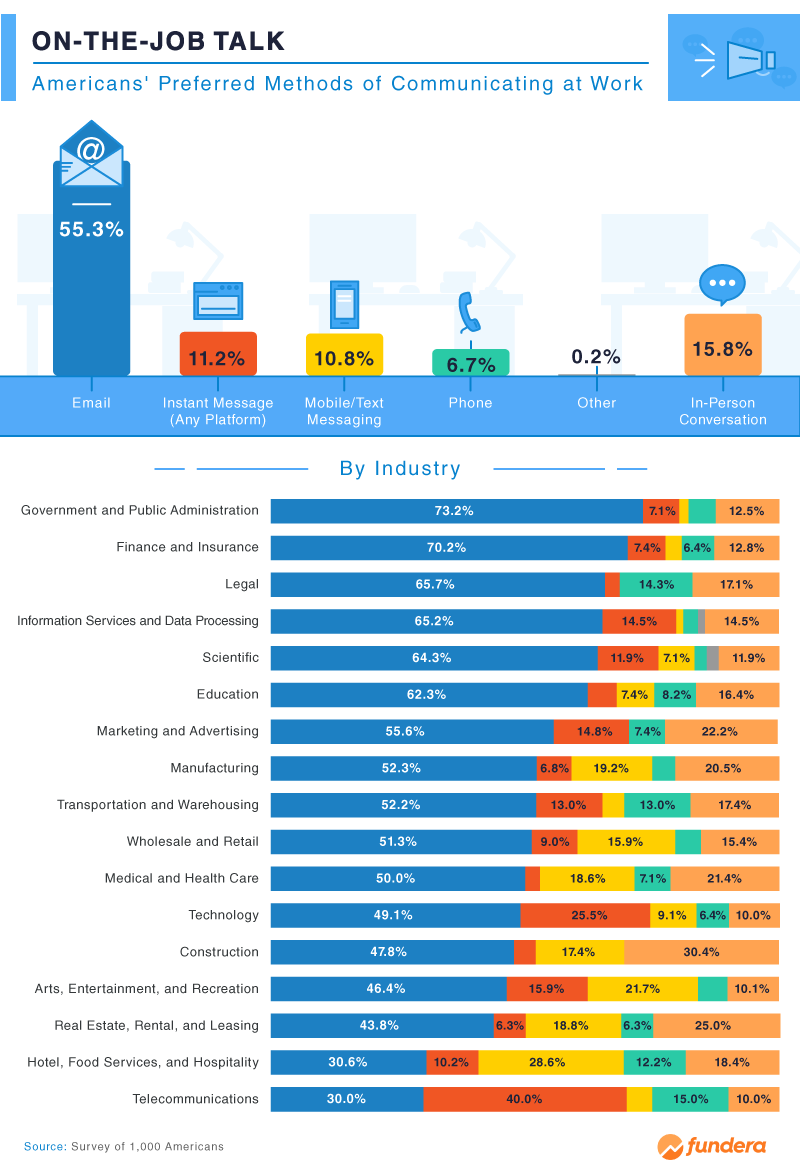 Emails aren’t just for marginally funny forwards or three-day sale coupons from the soap and candle shops at the mall—email communication can be a crucial element in how businesses communicate with their customers and employees.

Of the 1,000 Americans surveyed about how they prefer to communicate at work, more than half told us email was the way to go. While some research has found the sheer volume of email communication businesses receive can reduce productivity, there’s nothing easier than sending a quick email about an upcoming meeting or necessary adjustments to a project.

Around two-thirds of employees in the IT, finance, and legal industries preferred email over any other kind of communication, and nearly 3 in 4 respondents in government and public administration said the same. Notably, telecommunications employees were the only respondents who preferred instant message.

The second most preferred method of communication was an in-person conversation. For meetings, interviews, or just general updates, there’s nothing more personal—and less likely to be misinterpreted—than an in-person chat (it’s also a good reason to step away from your desk).[2] Despite the advantages of modern communication methods, more than 30% of those in construction and a quarter of people in real estate preferred in-person conversation as a way to communicate with fellow employees.

Slightly more than 1 in 10 people preferred instant messaging and mobile and text messaging, while less than 7% wanted to talk on the phone as a primary method of connecting with their office teams. 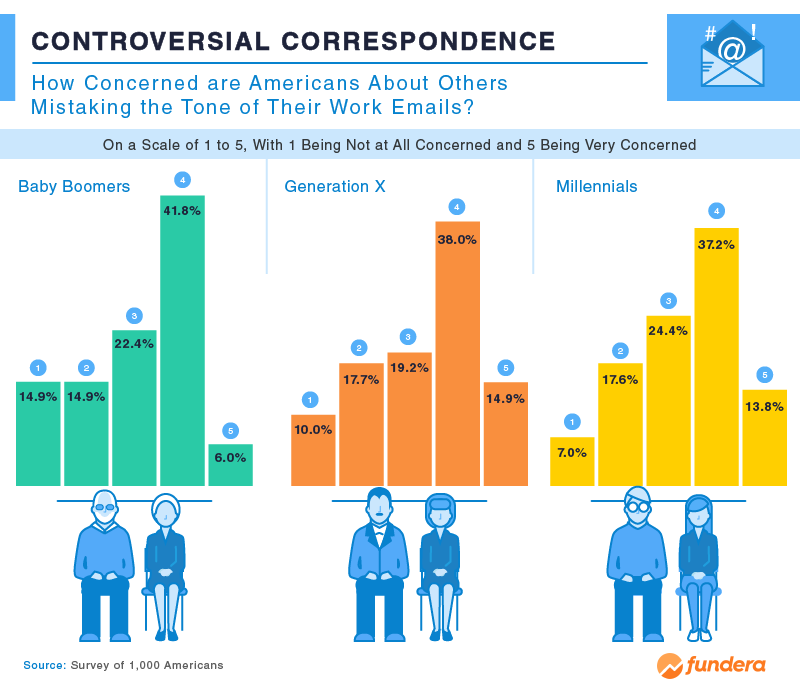 There’s an art to crafting a good email. Too short and it might not convey the gravity of your message. Too long and maybe no one reads it. In fact, there are some instances where it might not be appropriate to send an email at all, depending on the kind of information you’re trying to transmit.[3]

These kinds of digital complications can give you a sense of dread before pressing the send button. Will my co-workers understand that I’m joking? Will my boss feel like I’m trying too hard? According to survey participants, people of every generation were concerned about having their tone misinterpreted in an email.

Almost half of baby boomers rated their level of concern a four or five, with five being very concerned. However, while some have said millennials struggle to communicate effectively, they were the least likely generation to show no concern about others mistaking the tone of their emails.[4] 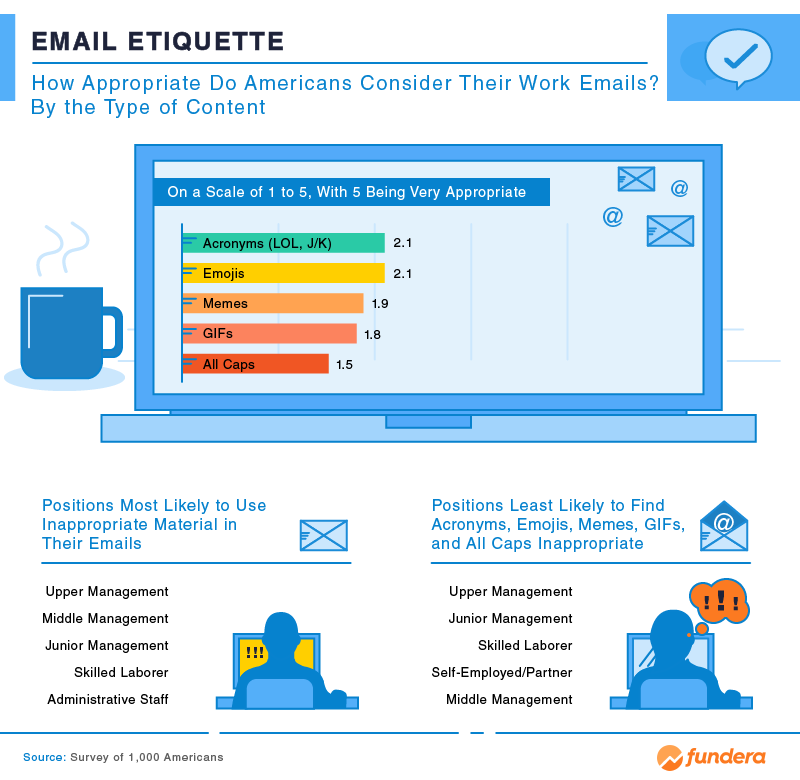 We also asked survey participants to rate how appropriate—or not—casual communication was in a professional email.

Acronyms like LOL (laughing out loud) or J/K (just kidding) and emojis were seen with the most leniency but not by much. Respondents rated the appropriateness of acronyms 2.1, with one being not at all appropriate and five being very appropriate. Research has shown overusing acronyms can confuse or alienate readers, so proceed with caution if you feel your email isn’t complete without at least one.[5]

Memes, GIFs, and emails typed in capital letters crossed the line and earned less than a two out of five on our scale.

Our survey also found the higher up someone was on the professional ladder, the more likely they were to include all five of these offensive email extensions. Respondents who identified as upper management were the most likely to include acronyms, emojis, memes, GIFs, or even capital letters and the least likely to find them inappropriate.

Save the Laughs for After Hours 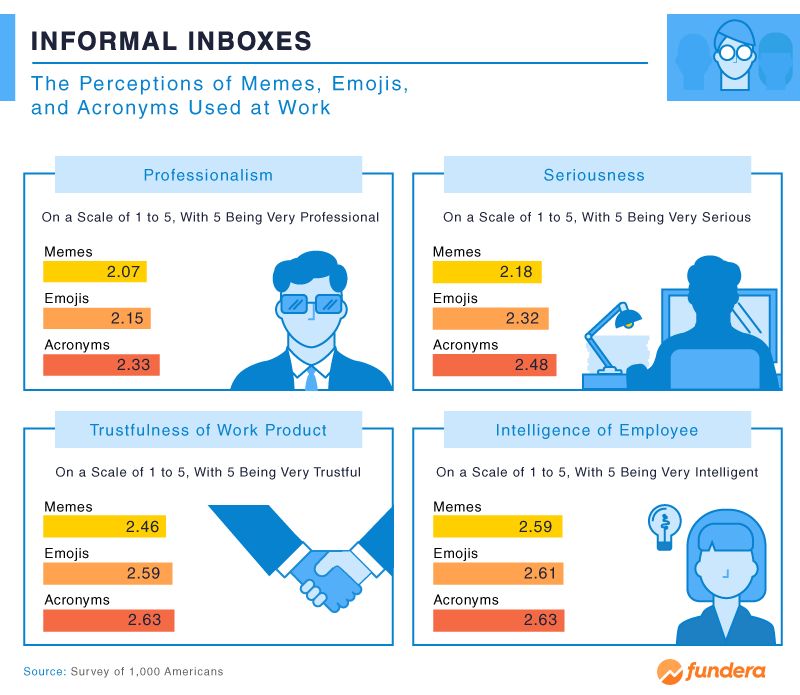 If you’re new to your work environment and want to make a good first impression, you ought to stay as far away from memes and emojis as possible.

Memes might be funny to look at on Facebook or Instagram, but they can make you look unprofessional in the office. Perhaps due to their overly casual nature, they also make their senders look like less serious about their careers and produce less trustworthy work products.

Emojis might be a popular way to send text messages or communicate on social media—your phone might even offer to replace words with emojis if you’re looking for a more animated way to make your point.[6][7] However, emojis were rated only slightly more serious or professional than memes. Respondents also indicated they found people who used memes, emojis, or acronyms as less intelligent.

When It’s OK to Add an Emoji 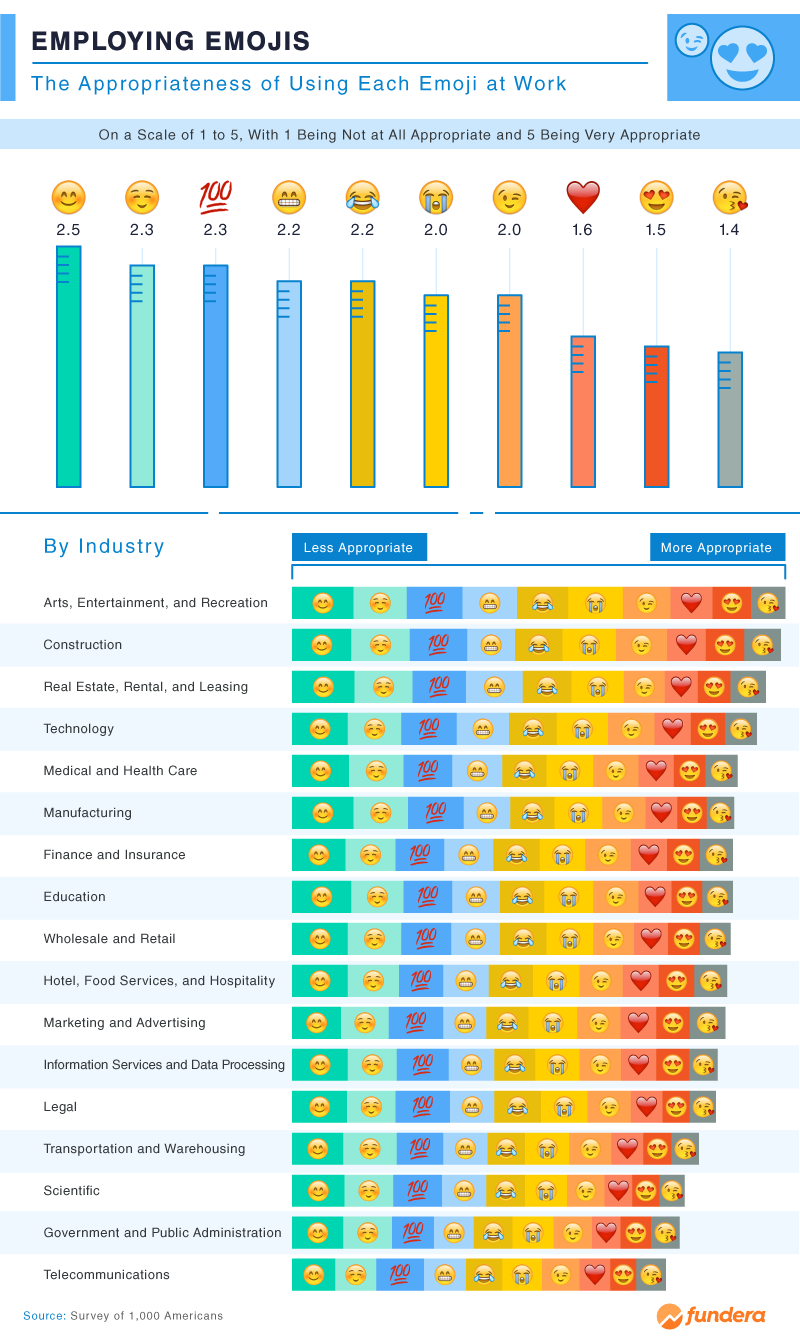 While emojis didn’t rank well when it came to professionalism or seriousness, not all emojis had the same reputation.

The smiling face with smiling eyes emoji was seen as the most appropriate emoji for an office email, receiving a rating of 2.5 on our scale. The smiling emoji is also one of the most commonly used emojis, making it easy to integrate into a professional email without standing out as too casual or offensive.[7] The blushing emoji, 100 emoji, grimacing face emoji, and the face with tears of joy emoji were also rated above a two out of five for appropriateness, making them safer bets if you feel compelled to use one.

Emojis to avoid included popular selections like the heart, smiling face with heart-shaped eyes, and the face throwing a kiss. The more emotional or affectionate emojis were, the less professional they seemed to survey participants.

However, the arts, entertainment, and recreation industries were the most comfortable with the use of emojis around the office, while government and public administration and telecommunications workers found them the least professional overall.

Double-Check Before You Hit Send 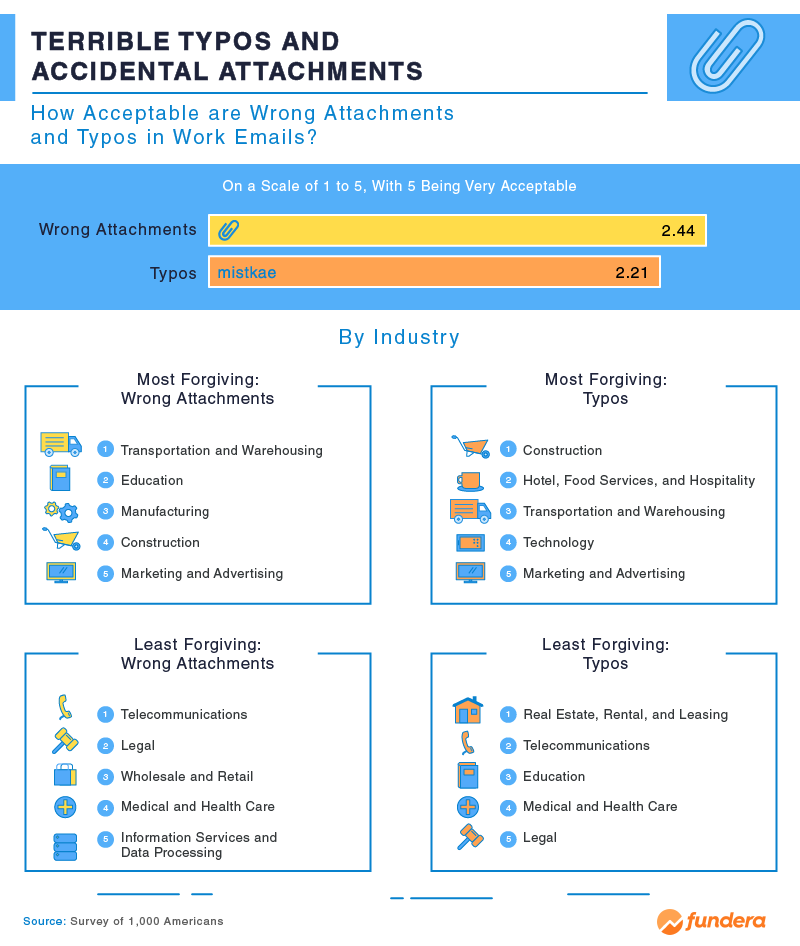 There might be worse things to send in an email than acronyms or GIFs. More than 1 in 5 people said it was not at all acceptable to send out emails with typos, rating typos only 2.21 on our 1-5 appropriateness scale. Particularly among industries where this communication might be customer-facing (like real estate and telecommunications), typos were considered a big no-no. Studies have shown people with less outgoing personality types are more likely to be offended by spelling errors and typos in online communication.[8]

Sending the wrong attachment was seen as less taboo than sending out an email with misspelled words. According to our survey, respondents working in the telecommunications and legal industries were the most unforgiving of incorrect attachments (imagine sending one client sensitive information that was intended for another), while transportation and warehousing and education professionals were more willing to look past erroneous mistakes. 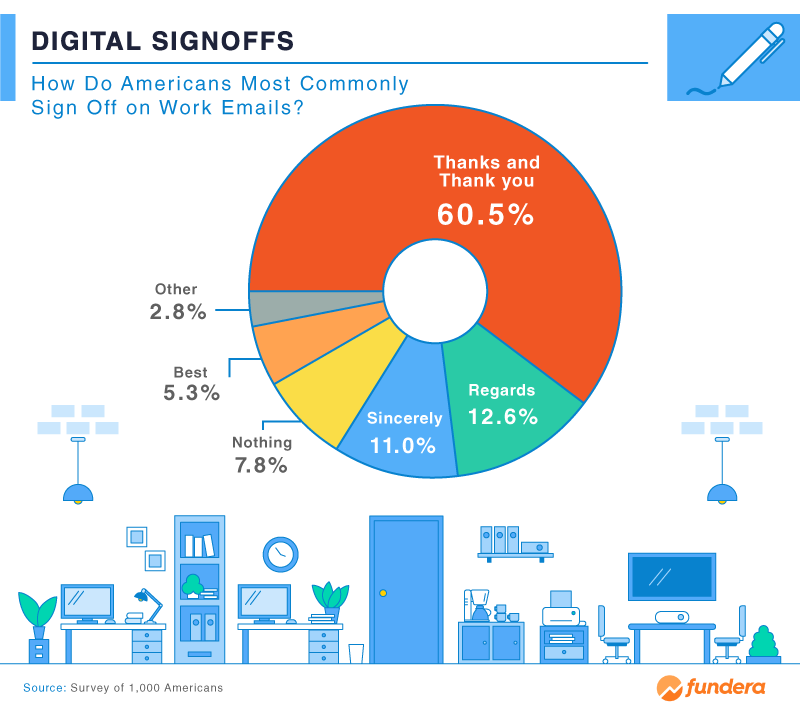 Now that we have a clearer picture of what should go into an email, what’s the best way to sign off before you hit the send button on in-office communication?

Called valedictions, over 60% of participants ended their emails with “thanks” and “thank you.” If you’re asking someone to do something for you or trying to win over a client, thanking him or her in advance might be a good way to seal the deal on your request.

Around 1 in 10 people preferred a more cordial signature, ending their emails with either “regards” or “sincerely.” And nearly 8% chose not to write anything at all.

Save the Flair for After Hours

While you might feel comfortable adding in a winking face emoji at the end of your email, or you think you have the perfect GIF to sum up a dreaded work meeting—think twice before including them in your next office email (unless you’re the boss). The odds are it could come off as unprofessional and even slightly uneducated.

We surveyed 1,000 Americans about their habits and opinions regarding office communication. Each participant was asked to evaluate the frequency of their own workplace communication behaviors, as well as their opinions of coworkers and overall appropriateness of each listed behavior.

Rankings were done on a 1-5 scale, and scores were averaged for each industry. Aggregate emoji scores of appropriateness by industry were calculated by adding the average scores for each emoji.

If you’d like to use any of our information about office communication, we grant permission to share all the images on this page freely for noncommercial purposes. When doing so, please credit back the authors by providing a link to this page and crediting the authors.