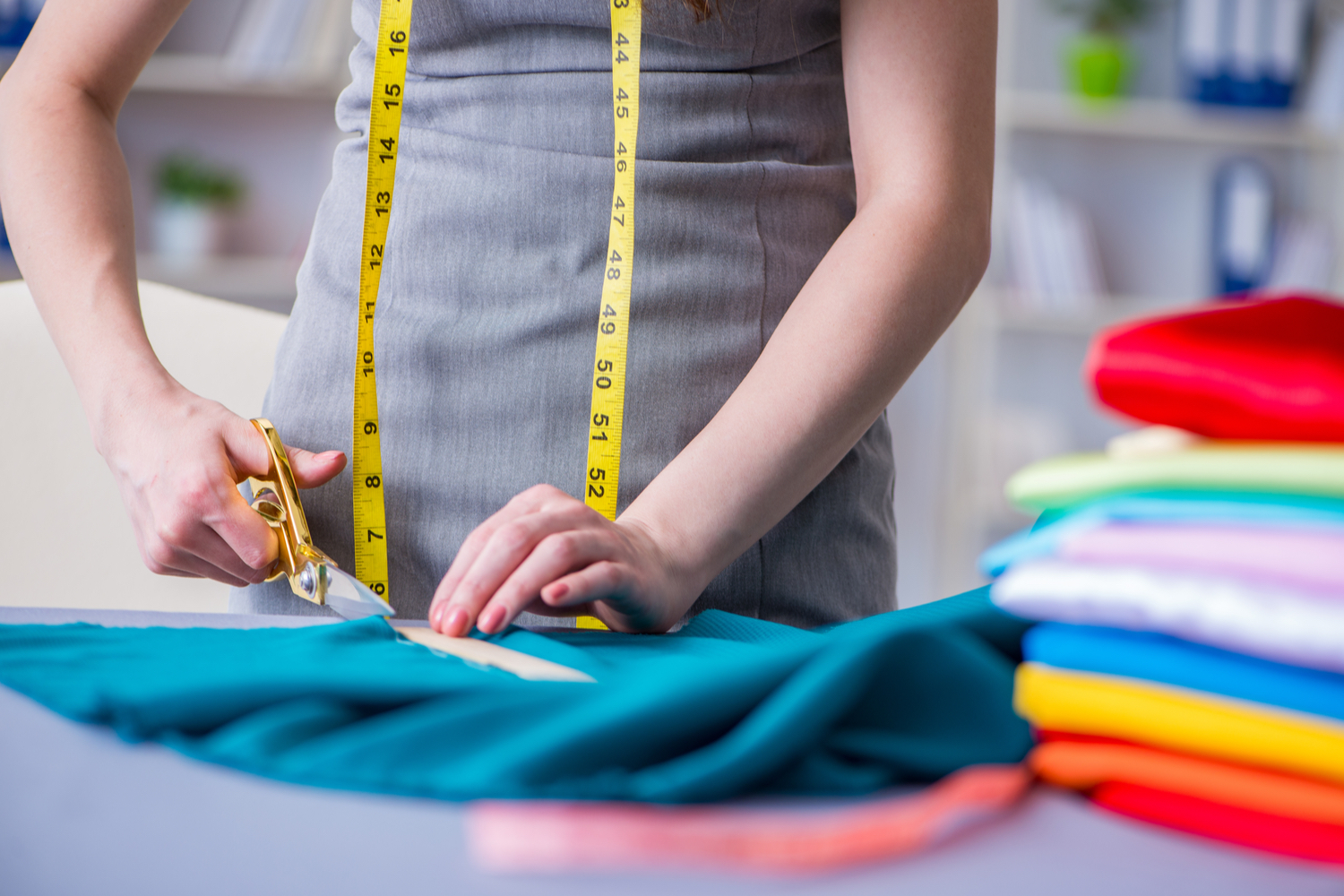 Mare-Mare owner and designer Maria Salcino has always been a fashion lover. Years ago, she was lucky enough to snag a business administration job at one of the largest specialty stores in the country, which got her foot in the door of the industry she loved. But both in and outside the office, Salcino couldn’t help but notice that all the clothing she and her friends coveted was way outside their budgets.

“I thought, ‘Is that the only option? Can’t we get those luxury finishes, those premium textiles, that great fit, at a price that’s more affordable for us?’ I wanted to make clothing for the professional woman who wants to feel like she spent a million bucks, but didn’t,” Salcino says.

That’s when the inspiration for her women’s clothing line, Mare-Mare, was born, and in 2014, she officially launched her line.

From Smart Consumer to Ethical Retailer

As Salcino would find out, starting a fashion business takes much more than loving the industry and a desire to design and produce quality clothing. Turning her idea into a reality required serious research and, eventually, a visit to China, where Mare-Mare’s textiles are manufactured.

Soon, Salcino launched her company’s headquarters in Miami, as well as a main office in China. (Salcino still commutes to China once a month, and works there for 10 days at a time.) But from the start, it was important to Salcino that she never sacrificed her business’s ethics in favor of supercharging sales.

“I’m proud that I was able to build this brand with the correct set of morals behind it,” she says. “All of our factories are certified. In our China factory, we run special programs for the employees, including a daycare so that working mothers can bring their children to work.”

The Mare-Mare business model would ultimately prove successful, too. “When the retailer puts our clothes on the floor, 80% is sold within the first 30 days. Because we’re so well-priced, women are afraid that our clothes will sell out, so they buy it immediately. But unlike other lines, we don’t have to wait until it’s on sale; customers can buy full price, and it’s the equivalent of it being on sale.”

Now, Mare-Mare employs 13 people in the U.S. office and the same in their China office. They do everything in-house, from designing to distribution to quality control.

Along the way, Salcino learned that planning and organization are crucial for laying the groundwork for a successful small business—without it, Mare-Mare wouldn’t have grown as quickly as they did. But in her day-to-day operations, more often than not those best-laid plans can go awry. The best approach, Salcino notes, is perhaps difficult for small business owners to do: go with the flow.

“The biggest challenge of being a small business owner is that you’re responsible for absolutely everything,” Salcino says. “To be successful in this role, you can’t put a title on yourself—you’re simply a problem solver. Whatever your problem is, that’s what you become.”

Due to the nature of her business, which involves manufacturing and shipping from abroad, Salcino found that helming Mare-Mare in particular required a willingness to learn on the go and the ability to evolve as her business and its operations became larger and more complex.

“You never know what the problem is going to be that day—could be logistics, shipping, or any number of issues. I’m very organized by nature. I have plans A, B, and C. I make cash flow projections. But there are so many moving parts that every day I deal with a new problem, and because it’s my business, I’m responsible for finding a solution.”

THANK YOU @coterie_show FOR THIS BEAUTIFUL POST ♥ #Repost @coterie_show ・・・ Whimsical dreams at @shopmaremare! So happy to see all their gorgeous pieces at booth # 1106 #coterie

One of those problems that required Salcino’s solution? Securing a business loan.

Since their start in 2014, Mare-Mare had gotten by completely through self-financing. Not only are personal loans generally more accessible for startups than business loans, but, as Salcino notes, “There’s a taboo among business owners of getting your company into debt.”

But over those four years, Mare-Mare had grown immensely—they counted major department stores as clients, and their clothing was placed in about 300 stores worldwide. Salcino didn’t want her fear of debt to stop Mare-Mare from growing as much as she knew they could. She needed to take her company to the next level. And to do that, she needed outside funding.

To find a source for that funding, Salcino did what she does best: she researched. She started by simply exploring online. “Then one day,” Salcino says, “I was scrolling through my Instagram, and I saw an ad from Fundera that caught my eye. So I clicked on it.”

From there, she was redirected to Fundera’s loan application, but she hesitated when the form asked for her social security number. “I know there are a lot of sketchy websites out there, so I thought, ‘Okay, it’s not my time. I’m not ready for this.’”

Since she wasn’t in a cash crunch—she would use her funds to grow her brand, rather than to keep her business afloat—she was okay with leaving her search there, and perhaps coming back to it when her needs were more urgent.

A week later, though, she received a phone call from a number she didn’t recognize. Although it wasn’t her habit to pick up numbers from strangers, “for some reason,” Salcino says, “I did pick up that call. It was someone from Fundera.”

Loan specialist Chris Fasano reached out to Salcino because he noticed that she’d begun her application without finishing it. He wanted to understand why, and whether he could help her through the remainder of the application. Salcino told Fasano that she appreciated his call, but she just didn’t feel secure providing her social security number online. Beyond that, she felt confident that she could obtain a personal loan on her own.

“So he said, ‘Okay, let me note this, and I’ll have the right person speak to you.’ So he passed the phone over to Ben.”

That would be Ben Fusaro, a senior loan specialist at Fundera. After connecting with Fusaro—who, as Salcino describes it, became like her “personal banker”—Salcino felt comfortable going through with the loan process with Fundera’s support.

“From that moment on, the only person I spoke to was Ben. He provided me with the most amazing, super-personalized experience. And to tell you the truth, that’s the reason why I decided to go through with the loan through Fundera. He explained every step of the process to me. I felt like it was a true partnership.”

Beyond that transparency, Salcino simply appreciated having outside support. As a small business owner, she was already stretched thin; she just wouldn’t have had the bandwidth to maneuver the business loan process without some guidance.

“When you’re running a small business and you start getting bigger, it’s like a snowball effect. You don’t realize that you’re growing and growing and growing, and you have no time to breathe. So to have someone come in and make your life a little simpler is just amazing,” she says.

The happiest Fridays start here, ready for the weekend in our Tasia Dress 💙

As it would turn out, Salcino’s concerns that the funding process would be overly complex were proven wrong. “As business owners, we’re used to having so much control over our companies. They’re like our babies,” she says. “It was scary for me to get into this new territory, because I had no idea what to expect. I thought it was going to be way more complicated than it was.”

First, Fusaro told Salcino that he would run a credit check on her personal score. It wouldn’t impact her score, but it would give him a sense of which loans Salcino might qualify for.

Salcino was happy to learn that her credit was good enough to qualify her for a loan. And, as Fusaro pointed out, taking out and repaying a loan would help Mare-Mare build business credit.

“So I said, ‘Okay, maybe I can get just a small loan to start, and we’ll start growing from there. Let’s try it, and if nothing happens, nothing happens. Long story short, we got approved for a great amount of money in less than 48 hours. I simply couldn’t believe it. It was easy, it was fast, it was responsible, and I can’t say enough good things about how personalized the experience was. I wasn’t bounced between different reps, I didn’t have to go to different people for every question I had. I can’t imagine that I got so lucky. I want every small business owner to have the same fantastic experience that I did.”

With Fusaro’s help, Salcino secured a term loan through LoanBuilder by PayPal, along with a line of credit from Kabbage, which Salcino hadn’t even known was an option. A business line of credit is a revolving resource that business owners can dip into in whatever amount and at whatever time they need. Unlike a term loan, they’re only responsible for paying interest on the funds they actually use. Even though Salcino hasn’t yet used her line of credit, she feels secure knowing that she has an emergency fund if she needs it.

Now, Salcino is using her 12-month LoanBuilder loan in exactly the way she wanted to: increasing production to keep up with increasing demand.

“All the money goes toward production; we’re always producing. And that has been our greatest success—that the public has recognized that our clothes are great quality, great fit, made with great technology, and they can’t believe the price. I’m so excited that my idea worked, and that women are liking it!”

It’s almost always the case that small businesses need to turn toward outside funding several times over their lifetimes, if only to boost their growth even more. Now, Salcino knows where to turn when that day inevitably comes, and she understands that there’s no need to fear the process.

“As a small business owner, I think Fundera is changing the way we finance our businesses,” she says. “You’re truly facilitating our growth. You guys care, which makes a huge difference. I feel now that Ben and Fundera are a part of the Mare-Mare family. I can’t thank you enough.”