When Jason Daniels was 18 years old, he saw an ad in the newspaper for electrical work. The job offered $7.50 an hour: well over the $5 an hour he was currently making. Although he had no experience in electrical work, that didn’t stop him from applying.

Little did he know that this one decision, inspired solely by finances, would change his entire career trajectory.

As you can probably guess, Daniels got the job. And within weeks, his knowledge of electrical work went from non-existent to vast.

His team was working on a hotel getting built from the ground up—a perfect opportunity to learn quickly. It wasn’t long before Daniels developed a true passion for the industry.

After a few years, though, Daniels started getting an itch to work on his own. “When working for someone else, it’s tough if you have ideas of your own. Some people don’t want you to share. They just want you to work,” says Daniels.

Not to mention, Daniels didn’t exactly agree with how the business was run. He knew there had to be a better way. He wanted to build his business to be customer-first instead of money-first.

In 2008, Daniels broke away and started a small partnership. It was his first step in proving out his business model. But Daniels quickly realized that he and his partner operated on very different pages. Daniels had a big vision for the business. Obviously, as there are lots of risks associated with growth, his partner didn’t feel the same. They soon decided to go their separate ways.

Getting Out of His Own Way

In 2012, Daniels struck out on his own, attempting to bring his “customer-first” business to life.

He started with a pickup truck and a bag of tools. 4 years later, Titans Electrical has over 20 employees—and millions in business.

A full-service electrical outfit, Titans Electrical specializes in residential remodels, but has been getting into more commercial projects over the years. Obviously, the company didn’t get to where they are without challenges. So, what was the biggest challenge getting off the ground?

“Myself,” remarks Daniels. “I get in my own way. I’m my own worst critic, telling myself I don’t have the right skill set and I’m not going to be able to do something. When I decided to get out of my own way, and find a way to make it happen, that’s when things changed.”

The challenges never stopped, of course, no matter how big Titans Electrical has become. Expressing a sentiment many business owners can relate to, Daniels says “We’ve gotten bigger, but I’m still just one person. Everything else has quadrupled: labor, equipment, phone calls, customers, and so on.” Learning how hands-on to be is what continues to challenge Daniels. It’s all about finding the right balance based on where his business is. 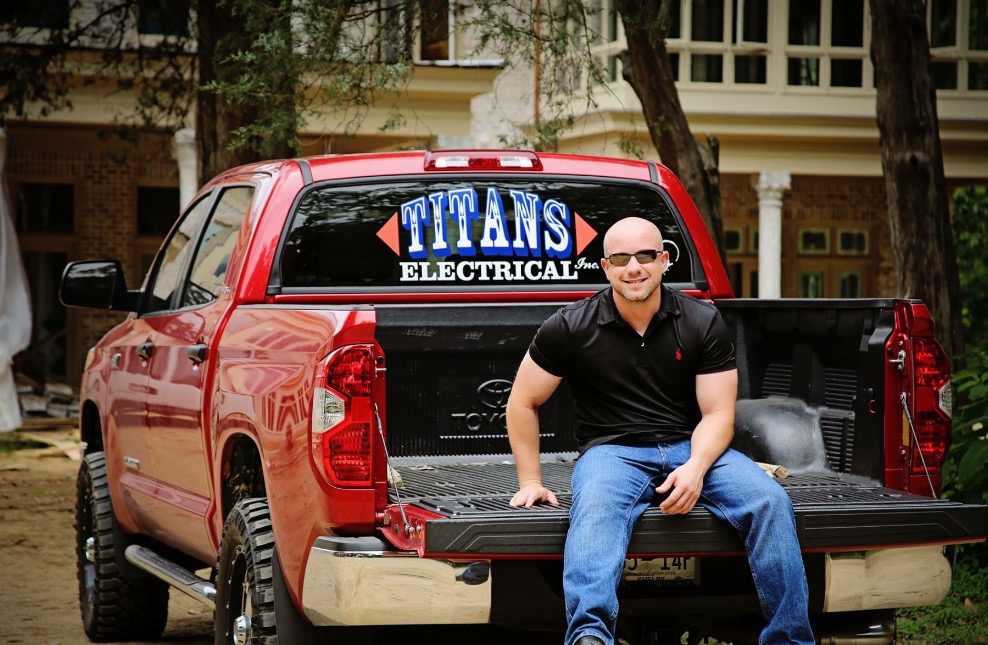 Part of finding that balance is also accepting the growth as it comes. Daniels faced a tough decision this year. His business was doing well, but it was still operating out of his garage. They had no storefront or storage space. Daniels knew he had a choice to make.

“It was time to move from being a mom and pop shop to a real force to be reckoned with.” To make that happen, Daniels would need funding.

He tried his local bank, and it didn’t work out. He took to Google, searching for potential options, when he discovered Fundera. In a short amount of time, Daniels had the capital he needed to take Titans Electrical to the next level.

“The whole process was great. My contact, Mike Schwartz, kept me informed throughout the entire experience. I couldn’t have expected anything better.”

With the funding in hand, Daniels was able to open a shop, buy bigger equipment, use more vehicles, and take on a larger workload. “We’re now able to tackle more of the commercial market. It’s starting to snowball. We’re doing outlets, dentist offices, doctors offices, and more. It’s about 100+ projects.”

At this point, Daniels is ready to focus on the part of the business that always meant the most to him: his customers. “I could be making billions of dollars, but if I have a bunch of people unhappy with my company, I wouldn’t sleep at night.”

Daniels’ business succeeds with a simple philosophy: “Treat my clients the way I’d like to be treated.” His business is all about taking care of his customers and putting his customer’s happiness first. In short, it’s the business he always wanted to have.

“I keep handwritten notes from my customers hanging in my office. I’ll never throw them away. That’s what gets me up in the morning. That’s what keeps this business growing.”

Having reached the million-dollar mark in just 4 years, Jason Daniels proves the power in building a customer-centric business—no matter your industry.